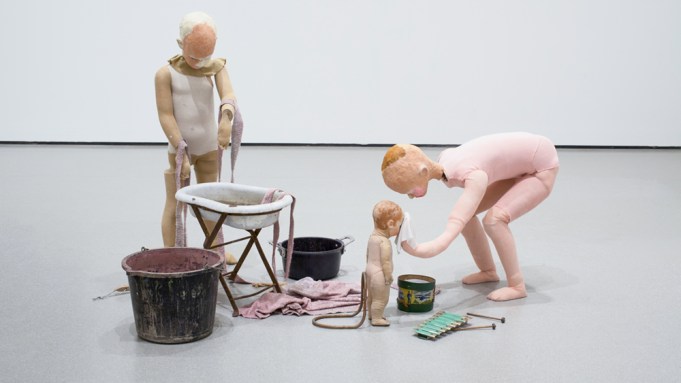 In Irish artist Cathy Wilkes’s midcareer retrospective—which brought together fragments from several installations spanning the past fourteen years and new pieces made specifically for the occasion—sculptures and found items in various stages of distress were arranged in intricate tableaux or placed in glass vitrines. Different-size canvases stained with pale smudges of lime, oil paint, or tempera were scattered throughout the galleries, helping to link the elements into a slightly discordant, melancholy ensemble.

Despite the variety of materials Wilkes employs in her installations, she consistently invokes a particular world—one defined by muddy or washed-out colors, soiled clothes, misshapen things bearing a patina of long use, and newish things that are depressingly cheap and shoddy. The inhabitants of this world are often children or childlike figures with a forlorn air about them, a sense of fragility and of mute, patient endurance. A typical scene was laid out in the show’s main gallery. At the center of the space stood an untitled sculptural installation (2017) featuring three limbless figures with slender cylindrical bodies and cartoonish plastic female heads. The ground below them consisted of wood-frame platforms stretched loosely with fabric weighed down by smatterings of popsicle sticks, dry thistle branches, and other debris; the figures seemed to hover on these sagging surfaces. Nearby was an earlier untitled installation (2012) showing two children with soft fabric bodies and papier-mâché heads. One was doubled down, wiping the face of a baby, while the other stood over a small wash basin filled with scraps of felt. Surrounding them were a bucket, a burned pot, and a xylophone.

While some of Wilkes’s scenes appear narrative-driven—Untitled (Possil), At Last (2013), for instance, portrays a man crouched over a wine bottle as two children watch from behind—most are abstract, their meaning more ambiguous. In one of the smaller galleries, pieces from several installations (i give you all my money, 2007; Non Verbal, 2005–11; and an untitled example from 2012) were assembled into a particularly intriguing display: two mannequins (one wearing pantyhose and a motorcycle helmet, and the other naked save for a small painting attached to its face) surrounded by a collection of objects, including a small TV on a glass stand, a stroller, a dirty salad bowl, and a low metal trough containing a car seat cushion and a DVD player. The objects seemed to be selected and arranged with deliberateness and careful consideration. Each thing, however trifling or pathetic-seeming, stood solemnly by itself, exuding an air of grave significance, as if it were a sacred relic, though the logic that brought it there remained elusive.

If one had to name a single idea or type of experience underlying all of Wilkes’s production, it would be that of poverty: not just the absence of money in itself, but the kind of poverty that is a state of being, a condition, most likely inherited, as a chronic sickness. Her works allude to life that is lacking in joy and color, that provides few possessions, most of them utilitarian, heavily worn, and indispensable. It is a humdrum existence of scarce or unappetizing food and mind-numbing labor and in which all conceivable glamor and luxury appear to be embodied in a store mannequin, a piece of gold-plated costume jewelry, or a new, third-rate TV set. This impression is conveyed not only by the general drift of Wilkes’s work but also by occasional, more specific clues: a newspaper clipping showing men in Ethiopia washing laundry in a puddle in the road, or a piece of cheesecloth embroidered with the statement WE NEED WATER. Wilkes’s work, in fact, recalls some of Ilya Kabakov’s early installations reflecting on the poverty and wretchedness of life in Soviet communal apartments.

While race, colonialism, queer culture, and feminism are established themes in contemporary art, poverty is rarely treated as a rightful subject for art-making, outside of documentary or activist work. In the wealth-obsessed, aspirational culture found around the world today, being genuinely poor can be more embarrassing and incurable than almost any other condition. This is despite or perhaps because of the fact that increasingly large segments of the global population live in deep poverty, and even in the world’s wealthiest country, the United States, millions of people are officially recognized as “extremely poor.” It is perhaps easier to empathize with a minority—ethnic, religious, sexual, or political—than with the vast masses of poverty-stricken people of all possible color, faith, and political persuasion. Wilkes breaks the silence around poverty by transforming its experiences into a subtle, haunting aesthetic. She portrays the world of the poor without condescension, resentment, or moral or social censure, making visible both its great tragedies and its small but poignant delights. She creates delicate, bizarre, powerful works that are perversely attractive, but that keep tugging at the back of the viewer’s mind, instilling doubt and disquietude and suggesting that, whatever her intention, Wilkes has touched a sensitive point.

‘There Is No Shame in Running’: ‘Stranger Things’ Drops Final Trailer for Fourth Season