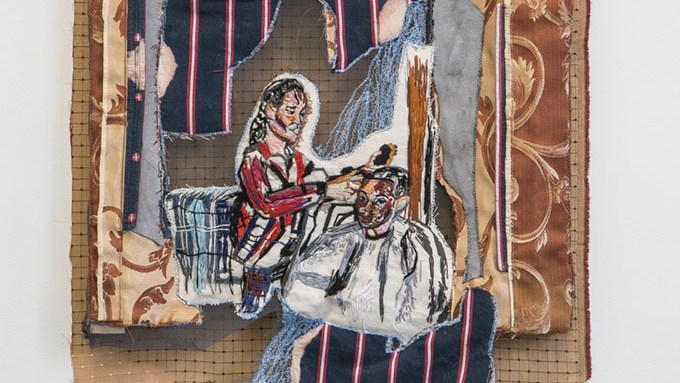 Chanel Chiffon Thomas’s exhibition at Goldfinch, “Fractured Reality,” featured eight bold assemblages in which thick sinews of embroidery are joined with found fabric, painted canvas, and other mediums to create portraits and genre scenes. Based on her personal archive of family photographs, the works depict figures primarily engaged in mundane moments of interaction in domestic interiors: a woman barbering a young man, for instance, or a man and child sitting at a kitchen table.

Despite Thomas’s use of a homey medium and the intimacy of her source material, the results are utterly unsentimental. This is partly an effect of her unconventional technique: she works lengths of embroidery floss through pieces of screen door mesh, creating thick, fibrous layers that simultaneously delineate and engulf her figures. Often, the figures seem to merge with their surroundings, as in the aforementioned kitchen scene, RRR (Reaffirm, Refine, Resourcefully), 2018, where the man’s shirt blends in with the wall behind him. A tender image of a sleeping father and baby, A New Dad (2017), turns menacing, as the pair appears to sink into a jagged sea of blue and white stitches.

In screen mesh Thomas has discovered a sculptural alternative to aida, the gridded cotton fabric employed by cross-stitchers. Because the mesh retains its form when bent and manipulated, it allows her it to create further dimension in her compositions. The embroidered form of a seated figure holding a faceless baby in A mother who had no mother (2018) physically hovers over the painted and pieced backdrop. The two faces rendered in chunky hatches of embroidery in Jeremiah 17:9 (2018) are made to curl into each other, composed as they are on opposite ends of wire mesh that has been gathered like a cinnamon stick. The irregular shapes of Thomas’s mesh matrixes blithely disregard pictorial conventions that isolate the space of the image from that of the viewer. In A mother who had no mother, a length of fabric made stiff with sugary pink paint hangs below the background’s lower edge. Fresh (2018) features a pair of men playing chess whose feet dangle out of their environment and into ours, a trajectory extended by the snarls of loose thread that Thomas has left hanging from her stitchwork.

From embroidery, a medium defined largely by the tedious repetition of uniform gestures, Thomas pulls remarkably varied, expressionistic effects. She often uses long, loose stitches in which slack areas of the floss float away from the surface. Confident darts transform a pink pant leg into a network of tendons in Fresh and form a hypnotic, pulsing pattern behind the woman and two children who lean forward, as if to scrutinize the viewer, in Care Package (2018).

Thomas’s proficiency with the needle is all the more evident in works that juxtapose embroidered elements with passages rendered solely in paint or pastel. The life-size self-portrait Colossians 3:9 (2018) was the exhibition’s largest and least competent work. Here, Thomas’s skillful stitching, limited to the figure’s face and one breast, is overwhelmed by patches of muddy, hesitant brushwork that approximate limbs and by clumsily stuffed and appended scraps of fabric. Yet to draw better with thread than most people do with more traditional materials—to produce a kind of sprezzatura through the piercing and plunging action of the needle—is an enviable achievement.