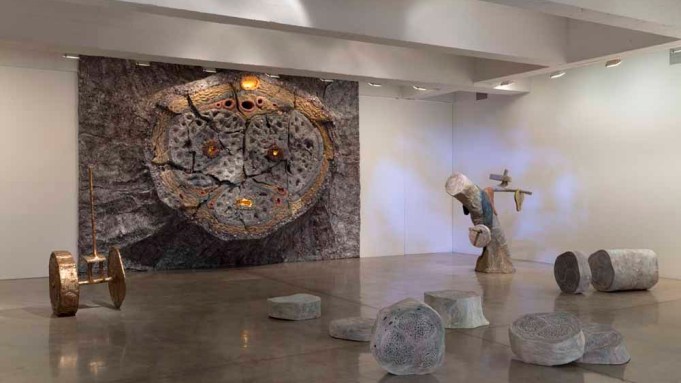 In “paradigm lost,” Charles Long transformed Tanya Bonakdar’s white cube into a surreal, dreamlike space: an incongruous fusion of a cathedral and a haunted forest. At the entrance to the show, four wall-mounted fountains based on urinals spouted holy water (“husbands,” all works 2018). The lights in the gallery were dimmed and slow, solemn music played on hidden speakers. Several large sculptures scattered around the space suggested strange hybrid species. Us.gOv, your amazOn Order Of 55,000 rubber sOldiers has shipped!, for instance, was a curving tree trunk cast in grayish rubber that appeared to be covered not with bark but with skin, veins visible under its surface.

Long has been surveying the ruinous effects of climate change on the forest landscape near the village of Mt. Baldy, California, where he has lived for the past ten years. While sketching one of the tree stumps in this environment, he decided to render its top as a cross-section of the human penis, which, he realized, resembled a frowning human face. Evolving from this episode, the exhibition’s works merged penile, natural, and man-made forms to construct an ironic commentary on patriarchy and its consequences. HOlysmOkes comprised a phallic sculptural form reclining on the gallery floor with a cigarette or joint dangling from its mouth, periodically expelling a thin wisp of fog from its bottom.

The exhibition—parts of which were shown at Made in LA and Bonakdar in Los Angeles last year—was at once melancholic and humorous. One wall displayed a big fucking relief, a floor-to-ceiling relief of a giant tree stump studded with hundreds of rock crystals representing the porous tissue and blood vessels of the penis, the eyes and mouth of its “face” glowing with hidden lights. Another wall was covered with paradigm lOst, a giant stretch of cloth showing a devastated forest landscape filled with hundreds of tree stumps, all featuring the penis’s cross-section in place of tree rings.

Many of the pieces on view incorporated ironic quotations of work by famous male artists, such as Giacometti, Munch, and Guston. A vertical column of suspended tree slabs depicted in paradigm lOst alluded to the sculptures of Donald Judd. The ChariOt was modeled on a sculpture by Giacometti, but replaced the figure in the original with an elongated penis whose tip was carved with a tiny face resembling that of Donald Trump. Fathers, a pile of penile slabs and branches made from papier-mâché, mimicked the heaps of assorted household objects in Guston’s late paintings. While the sculpture’s title invoked the idea of Guston as one of the “fathers” of contemporary art, it might also have hinted at his notorious failure as an actual father, as conveyed in a biography by his daughter, Musa Mayer.

Perhaps the most direct expression of the show’s symbolism was Our mOther Of the patrified fOrrest, a backlit transparency imitating a stained-glass window. Installed in a corner of the gallery, the work portrayed two erect phalluses side by side and the sad face of a penile cross-section floating above, comically alluding to Christian iconography. Parts of the print had been peeled away so that the window appeared to be partially broken. This damaged, pseudo-religious artifact presiding over the installation seemed to memorialize a great patriarchal civilization in decline, one whose unchecked arrogance and rapaciousness has left devastation in its wake.