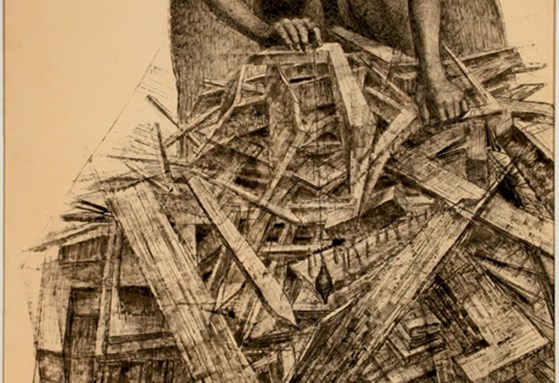 Counterfactuals are back in fashion. The election of Donald Trump catapulted sales of Philip Roth’s novel The Plot Against America (2004), which describes what might have occurred if Charles Lindbergh, running on his anti-Semitic “America First” platform, had won the presidency in 1940 instead of Roosevelt. Philip K. Dick’s novel The Man in the High Castle (1962), an imagining of a world in which the Axis powers had won World War II, has been made into a popular television series, as has Margaret Atwood’s The Handmaid’s Tale (1985). The latter is perhaps more dystopian than alternative history, though many people consider Atwood’s Republic of Gilead to be a through-the-looking-glass version of the United States.

After I saw the immensely moving retrospective of work by Charles White (1918–1979) at the Art Institute of Chicago, which opens this month at the Museum of Modern Art in New York, another counterfactual came to mind: “What if Charles White had been white?” If he was white, his Works Progress Administration murals (1939–43) would likely have focused on modern industry, rural labor, or the conquest of the frontier, not the struggle of black people for emancipation and respect. The Contribution of the Negro to Democracy in America (1943), a mural he made for the historically black Hampton University in Virginia, draws on the realist indigenismo of the great Mexican muralists Diego Rivera, José Clemente Orozco, and David Alfaro Siqueiros. It’s a dynamic, densely packed mosaic of heroic African American figures, including Crispus Attucks, Nat Turner, Harriet Tubman, Marian Anderson, and Paul Robeson. By the end of the 1940s, White’s realism had become Socialist, influenced by the art of the Soviet Union. The fractured surfaces and assaultive colors of the murals gave way to the kind of naturalism promoted by Andrei Zhdanov, secretary to the Central Committee of the Communist Party of the Soviet Union.

If White had been white, he’d likely have rejected Socialist Realism and embraced instead the “anti-humanism” of the New York School artists. He probably wouldn’t have traveled to Eastern Europe and the USSR at the height of the Red Scare in 1951 (a bad career move) or published essays and illustrations in the communist publications New Masses and Masses & Mainstream. To be sure, there was an abundance of white communist artists at the time, including Morris Topchevsky, Mitchell Siporin, and Hugo Gellert, but few had White’s talent. Those who did, like Jackson Pollock, Ad Reinhardt, and Barnett Newman, went in entirely other artistic directions.

Finally, if White had been white, he’d have been patronized by Peggy Guggenheim, represented by Betty Parsons, championed by Clement Greenberg, and collected by the Museum of Modern Art. White’s works didn’t enter MoMA until 1970, and then modestly—a gift of six lithographs he made in collaboration with a master printer at the Tamarind Lithography Workshop in Los Angeles. In co-organizing the current exhibition, it appears, MoMA is making up for lost time.

White, of course, wasn’t white, and for his four-decade career he remained focused on the lives, struggles, and aspirations of working-class black Americans. As a young man from the South Side of Chicago, he spent afternoons at the public library, where he discovered Alain Locke’s anthology The New Negro: An Interpretation (1925) and read works by Richard Wright and Gwendolyn Brooks. (By the late 1930s, he had met the latter two and other writers and artists of the Chicago Black Renaissance.) White’s drawing skill was apparent early. At around age fourteen, he drew from life a convincing portrait of Langston Hughes; at twenty-two, created a tempera called Four Workers that possesses the dynamism of Siqueiros’s work; and at twenty-seven, made a lithograph titled Hope for the Future that recalls Käthe Kollwitz’s many images of mothers and children.

Much of the work White made after his shift to Soviet-style Socialist Realism, such as the charcoal drawing Ye Shall Inherit the Earth (1953), can’t be faulted on formal terms, except perhaps for its faultlessness. But to criticize White for his fidelity to the Communist party line on art may be unfair. His was a nearly impossible task: to produce work that could hold its own beside the very finest museum art while still attending to the needs of a burgeoning civil rights movement that needed inspiring images.

After White moved to Los Angeles in 1956, his art again became experimental and expressive, combining realism, surrealism, and even abstraction. In Birmingham Totem (1964), made in response to the 1963 church bombing, White shows a nude young man perched atop a mountain of rubble. It reminds me of Paul Klee’s print Angelus Novus (1920), which depicts a figure Walter Benjamin famously described as the angel of history, with “wreckage upon wreckage” being hurled at his feet.

In the ink drawing Nat Turner, Yesterday, Today and Tomorrow (1968), White engaged the prophetic tradition of Frederick Douglass, W.E.B. Du Bois, Langston Hughes, Malcolm X, and Martin Luther King. Like them, he imagined a redeemed world. Currents of light and dark engulf the rebel Turner. His head is thrown back and his arms are outstretched, as if he is singing a song of freedom. At the top of the composition, Turner’s face reappears, against a faceted field, while at right a fragile bird hovers—another Angelus Novus—amid the storm. What if Turner’s Virginia rebellion, the image appears to propose, had grown into a general insurrection, coursing from county to county and state to state? What if slavery had been brought down by the combined force of slaves, free blacks, and the thousands of working white men and women who had no stake in the plantation system? That’s the counterfactual that this magnificent drawing imparts. White produced many such exercises in critical thought and imagination. Admired by black and white radicals in the 1960s and ’70s, they remain compelling and essential today.