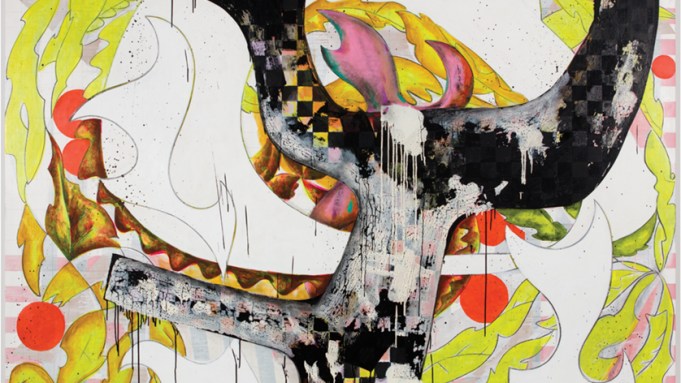 Charline von Heyl’s oeuvre is characterized by its elusiveness: over the past three decades, she has persistently refused to develop a cohesive style, instead moving freely between disparate painterly modes. Borrowing elements from various sources—Cubism, Informel, Minimalism, and graffiti, to name only a few—she approaches the history of painting since modernism as if it were a toolbox, a set of available tropes and techniques waiting to be strategically deployed whenever they suit the demands of a given composition.

Von Heyl, who has been based in New York since the mid-1990s, began her career in Düsseldorf and Cologne, where she belonged to a milieu dominated by painters, like Martin Kippenberger, Sigmar Polke, and Albert Oehlen, who thought ironic deflation was the medium’s only viable path. Von Heyl disagreed. Her compositions might put forth unexpected shifts and collisions that produce a “kind of visual mindfuck,” as she put it in a 2010 interview with Bomb magazine, but she does not intend such effects to be subversive gags. Motivated by a sincere belief in painting’s ability to elicit transformative aesthetic experience, she aims to slow viewers down and trap their gaze. “What I’m trying to do is create an image that has the iconic value of a sign but remains ambiguous in its meaning,” she said. “It’s not about mystifying anything; it’s about lengthening the time of pleasure. Or torture.”

Titled simply “New Work,” von Heyl’s recent exhibition at Petzel featured seventeen paintings dating from 2016 to 2018 that swerved from gestural abstraction to cartoonish figuration to hard-edged graphic pattern. While certain motifs and patterns recurred in multiple works, some of the paintings were so wildly dissimilar that it was difficult to imagine a single artist producing them during a two-year period. In Corrido (2018), placed by itself in a small side room at the show’s entrance, a branchlike black form reaches across the canvas, intermittently merging with a confounding ground of layered pattern: checkerboard grids, floating red-orange dots, leaflike arabesques. Tondo (2017), the exhibition’s sole shaped canvas, similarly employs black-and-white checked patterning and forms suggesting stylized flora, but the result is bold and decorative, with stenciled leaves, flowers, and geometric shapes framed by an undulating ribbon of flat black swooping around the canvas. Other paintings veered off in different directions entirely: Dial P for Painting (2017), for instance, sets a slapdash sketch of a rotary phone on an acid yellow ground.

The results of von Heyl’s ranging approach are decidedly mixed: allover compositions like 5 Signs of Disturbance and The Floodsubject (both 2018) are merely busy, and the crude drawing of Do You Peeve Cato? (2017), however deliberate the sloppiness is, undermines any sense of compositional tension. But others left me nearly breathless. In the dazzling Lady Moth (2017), a web of black lines serves as scaffolding for scrolling icy blue and lavender forms, each of which bears a pattern of dripped and flung paint that pushes against the shape’s precise contours. At the center of the work, the simplified silhouette of a moth is rendered in modulated black that suggests chiaroscuro and gives the form an impossible solidity. In Mana Hatta (2017), ethereal orbs redolent of Sonia Delaunay’s iconography are interrupted by the stark silhouettes of jumping rabbits superimposed across the painting’s lower edge, the work invoking the dreamy utopianism of early abstraction only to bring it back to earth. Here, as in many of her best paintings, von Heyl harnesses dissonance, producing a confrontation on the canvas that lingers in the mind long after the encounter has ended.