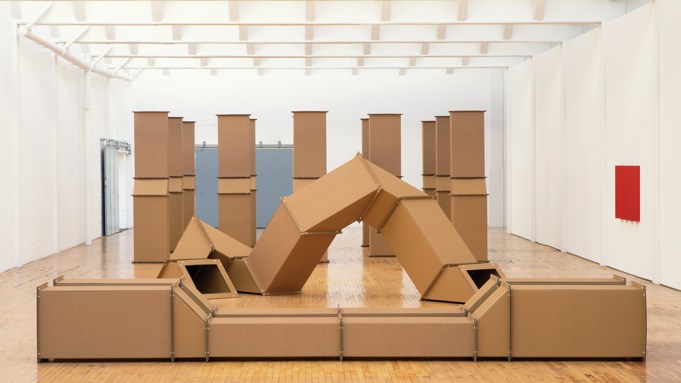 IN 1968, a year marked by an uprising of social movements spanning from Rio de Janeiro to Paris to Lahore, the German artist Charlotte Posenenske offered a damning diagnosis of art’s relationship to political struggle: “Though art’s formal development has progressed at an increasing tempo, its social function has regressed,” she wrote in a manifesto published in the May 1968 issue of Art International. “It is difficult for me to come to terms with the fact that art can contribute nothing to solving urgent social problems.” The following year, Posenenske followed this statement to its most uncompromising conclusion: she dropped out of the art world entirely. Though she was increasingly recognized for her Minimal and Conceptual work within European art circles, Posenenske abandoned it to become a sociologist of factory labor, aiming to fight alienation and support workers’ self-management. That the output of her brief artistic career—which lasted just over a decade—is now the subject of a retrospective at Dia:Beacon suggests that she has entered the Minimalist pantheon. But would Posenenske, who died in 1985 at age fifty-five, be pleased to find her work in the innermost chamber of the temple of Minimalism? Or would she prefer to redirect our attention to the building’s past life as a Nabisco box-printing facility, a history indexed by the marks left by machines once bolted to the same floor on which her sculptural objects now stand?

In the exhibition, which was curated by Jessica Morgan and Alexis Lowry, Posenenske’s primary-colored geometric reliefs and her modular metal and cardboard sculptural objects populate two long, skylighted galleries. A corridor contains early paintings, sketches, and archival materials that offer broader insight into her visual practice. In the 1950s, Posenenske worked as a set and costume designer for theater and opera productions and created murals for a community center and elementary school near Frankfurt. Such design work fits within an avant-garde tradition that can be traced back to Soviet Productivism and the Bauhaus’s attempts to push art into life during the interwar period. Posenenske reprised these historical impulses during the Wirtschaftswunder (“economic miracle”), a period of intensive economic development in Germany following the devastation of World War II. Between 1966 and 1967, she initiated three series of reliefs that reflect an enthusiasm for technical efficiency and rationalized production that chimed with the broader economic shifts occurring in Germany at the time. Designated A, B, and C, the series comprise thin metal sheets, mostly aluminum, painted with industrial varnishes and often simply folded or curved.

It’s no accident that the components of Posenenske’s “Vierkantrohre Serie D” (Square Tubes Series D, 1967–), her best-known work, could easily be mistaken for air ducts. This series consists of six types of rectilinear steel tubes and angled connecting pieces that can be combined and configured any number of ways to produce various sculptural forms. When installed on walls and ceilings, the forms can appear to merge with a building’s structural features. In the 1968 manifesto, Posenenske wrote that her works were “decreasingly recognizable as ‘artworks’” and called them “prototypes for mass production.” The fabricator of “Vierkantrohre Serie D” went so far as to sell surplus stock as actual ventilation pipes.

Many of Posenenske’s sculptures can be reconfigured or installed in different orientations. But while she intended the public to actively engage with such aspects of the works, curators have mostly determined the arranging in recent exhibitions. At Dia:Beacon, various sculptures were reorganized in public view in May, and another such event is scheduled for August. I visited the exhibition during its initial phase. The curators had chosen to install “Vierkantrohre Serie D” and its cardboard counterpart, “Vierkantrohre Serie DW” (Square Tubes Series DW, 1967–), in mostly freestanding arrangements—as opposed to on the walls and ceiling, where they might not be as immediately legible as art—which assimilated them into a conventional history of sculpture and gave Posenenske’s radicalism short shrift.

On a formal level, Posenenske’s artwork, with its hard edges and industrial materials, seems a logical fit with the 1960s Minimal sculpture on view in Dia:Beacon’s other galleries. But it challenges the orthodoxies of that canon. Her insistence on creating changeable works, for instance, reflects values that would have been anathema to Donald Judd and Robert Morris, who advocated unitary, fixed forms in their writings from the mid-1960s. Judd, Morris, and Carl Andre cultivated an association with blue-collar laborers by sporting coveralls and hard hats while making works using construction materials like brick, timber, and steel. Yet as the art historian Julia Bryan-Wilson points out in her book Art Workers: Radical Practice in the Vietnam War Era (2009), this was a romantic self-fashioning that elided the social and economic gaps that separate a sculptor from a workaday manual laborer and art from everyday consumer goods. By contrast, Posenenske drilled down on these differences. She produced many of her sculptures in unlimited multiples and sold them at cost—a refusal of the surplus value usually tacked onto artworks. She even gave a discount for bulk orders and aspired to sell her sculptures at department stores. Whereas most Minimalist sculptors sought to achieve a mass-produced look while still producing bespoke objects, Posenenske actually made her sculptures en masse and embraced the fingerprints, dings, and scratches that came with their reconfiguration and transport. For her, such marks signified the social life of the objects. Further, she credited fabricators and viewers as equal collaborators in the production of the artwork, drawing attention—long before “social reproduction” and “affective labor” became buzz phrases—to the invisible work that makes all other work possible.

The direct social and political engagement that sets Posenenske apart from most Minimalist sculptors, however, is legible only in the margins of the present exhibition, if at all. This is partly because of Dia:Beacon’s focus on her object-based practice, but it also reflects the inherent difficulties of representing work that veers toward the edge of art’s frame, or leaves it behind entirely. Before Posenenske abandoned art-making in 1969, she voiced increasing skepticism of the ameliorative social function that institutions, corporations, and the state often call upon art to serve. When invited to propose a sculpture for the courtyard of an apartment complex, she surveyed residents to find out whether the housing development met their needs, and learned that it remained lacking. Thus, she wrote an open letter to the developer stating that “every investment that goes beyond minimum satisfaction of actual needs serves only to fool people into believing that these had been met. . . . In this case, art takes on the function of an alibi. Under these circumstances, I refuse to participate.” At Documenta 4 (1968), Posenenske handed out flyers that condemned artists for espousing progressive politics within the exhibition while remaining complicit with violence and inequality in the world at large: “You cannot condemn the capitalist war in Vietnam and let the same social system shore you up as a cultural alibi,” one text stated. During this period, Posenenske also drew large diagrams of social structures and networks of production and circulation, illustrating the interdependence of seemingly separate spheres of society. This all feels very contemporary, but there’s no sign of it at Dia:Beacon.

Posenenske hoped that her efforts as a sociologist might facilitate the creation of worker-owned and worker-run organizations that broke with the monotony and exploitation endemic to industrial production. In light of new strategies of exploitation and control that have emerged alongside the recent turn to “immaterial labor,” her work now has a utopian air, evoking a bygone era in which avant-garde artists still believed in an outside to power. Even so, Posenenske’s art practice remains rich and thought-provoking, particularly when it’s understood in the broader context of her work as a sociologist and activist. The challenge for institutions that want to “exhibit” her work, and others like it, is to find ways of representing the movement between art and life in all its complexities.

This article appears under the title “Charlotte Posenenske” in the June/July 2019 issue, pp. 109–110