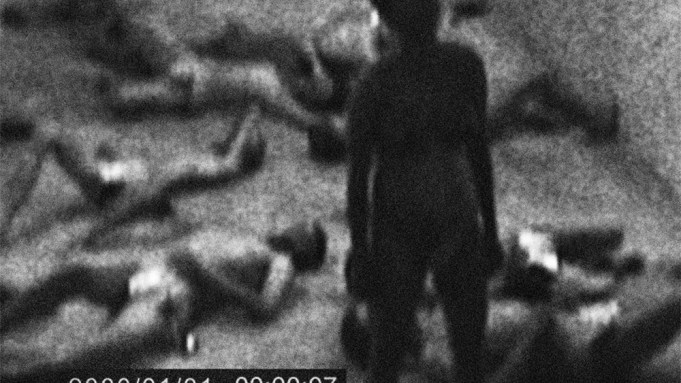 Chen Chieh-jen’s exhibition at Lin & Lin, “After the Financial Crisis and Automated Production,” featured a selection of his old and recent works exploring ways in which Taiwanese have been affected by neoliberal capitalism and technological developments. The show revealed how Chen’s approach to these themes has changed since the 1990s. While he previously offered dystopian views regarding globalization and technology, he now attempts to imagine possibilities for people to extricate themselves from such controlling forces.

In the first gallery, visitors encountered an installation containing Notes on the Twelve Karmas (1999–2000; reedited 2018), an eight-minute video Chen made in response to the 1997 Asian financial crisis. In the video, a group of naked and emaciated people crawl about a staircase in an underground tunnel, with braces supporting their fragile limbs and computer cables plugged into their anuses. Standing alone among them is a pregnant woman, naked and blighted as well, a foreshadowing of the future. The video played on a monitor inside a freestanding glass-walled room, in which bright overhead lights created a bureaucratic-seeming contrast to the visceral imagery. Outside the room, speakers blasted a cacophonous soundtrack of electronic machine noises; inside, this auditory chaos was muted, and the temperature rose uncomfortably due to the heat from the lights and the viewer’s body.

The recent works in the show eschewed horror for a more personal approach. “Star Chart” (2017) is a series of black-and-white photographs shot in Chen’s brother’s apartment. In an accompanying statement, Chen explains that his brother, a casualty of the 1997 crisis, has suffered from depression owing to long-term unemployment, and in 2008 attempted suicide by slitting his wrists. A while after this incident, the artist says, his brother began “collecting and organizing alternative knowledge,” turning his apartment into “an archive for images and text.” In Chen’s photographs, we see clutter all around: books, newspapers, electrical cables, broken televisions or computer monitors. A star chart is pinned to the wall. While the nature of the archive remains unclear, the photographs portray a person seeking to amass his own body of knowledge through which he might develop a new worldview.

Similar subject matter is found in A Field of Non-Field (2017), a sixty-minute video of a staged funeral procession for a lost but living man. The ceremony is led by two men carrying a computer and the clothes of the person for whom the attendees have gathered: the unnamed narrator’s brother, who, like Chen’s, tried to kill himself. He is carried on a bier that resembles an apartment building. Behind it, more men carry a large model of an institutional-looking complex suggesting a prison, housing project, or hospital, and others carry a glassy-eyed woman seated before a dirty mirror and a disabled man perched on a chair. The procession ends as a group of women sing a traditional Hakka song of absent love, and the brother, walking away with bandages around both wrists, pauses with the audience to listen.

In this solemn video, we see a character who appears to be suspended in a kind of limbo, leaving behind a former life but not yet at a new destination. Betweenness is in fact a general theme in Chen’s recent work, perhaps alluding to his stated desire to pursue the Middle Way, a Buddhist practice, based on the Eight Negations, through which one can attain enlightenment by embracing neither birth nor death, finitude nor permanence, sameness nor difference, coming nor going. Through such a discipline, Chen believes we can develop new value systems that will free us from the mechanisms of the current neoliberal world order.