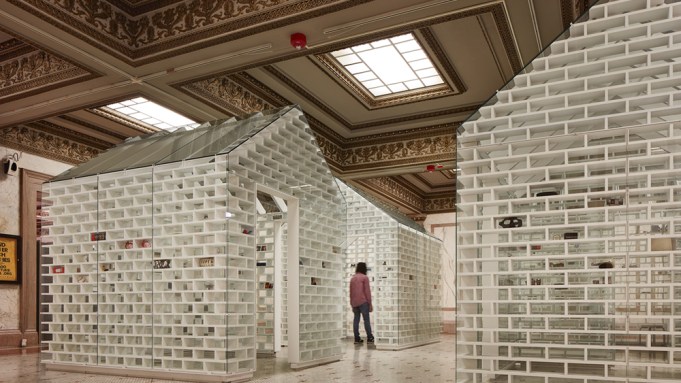 The charged, evocative third edition of the Chicago Architecture Biennial pivots away from the young initiative’s early hallmarks. The prior editions were framed as authoritative disciplinary surveys, mounted against Chicago’s monumental architectural backdrop. This installment’s curatorial team—Sepake Angiama, Paulo Tavares, and artistic director Yesomi Umolu—is concerned less with making sweeping arguments about the state of the field than with radically rethinking the urban landscapes of power within which architecture operates. Of central importance, as the exhibition’s deceptively demure title, “ . . . and other such stories,” suggests, is narrative: how can suppressed stories destabilize received understandings of place and visualize, as the curators’ statement would have it, “the city otherwise”?

Inside the Chicago Cultural Center, the citywide initiative’s main venue, it quickly becomes clear that avowing social struggles and violent histories is a cornerstone strategy. Prominent land acknowledgments welcome visitors with texts affirming Chicago’s continuing history of Indigenous inhabitation. Immediately adjacent, Michigan-based research collective Settler Colonial City Project and the American Indian Center of Chicago emphatically elaborate the argument. Executed in a provisional style suggestive of a guerrilla action, their Decolonizing the Chicago Cultural Center (2019) uses transparent plexiglass signage and vinyl text to make a series of interrogative annotations throughout the landmark building, delineating histories of genocide, land theft, and forced labor entangled in its construction. A text at the building’s northern entrance begins: this marble was quarried and assembled by exploited labor.

The biennial will undoubtedly be remembered for its political engagement, but it is defined just as much by a curatorial refusal of architecture, or at least architecture narrowly understood. Representations of buildings—the field’s traditional object—are hard to find. Models, blueprints, renderings, and conventional architectural photography barely make an appearance. Instead, the predominant mode of display is installation. Centering on a proposition to declare the seventy-year-old Palestinian refugee camp Dheisheh a World Heritage Site, Palestine-based architecture studio Decolonizing Architecture Art Residency’s Refugee Heritage (2015–18) offers a lyrical, fragmented portrait of the place by way of photographic light boxes and dossiers arranged across the floor. The London-based practice Territorial Agency presents Museum of Oil (2019), a mock museum originally developed with Greenpeace, that models a world in which the fossil fuel industry has become a historical footnote. Freestanding photo walls leaning over visitors channel them between monumental images of a shale fracking field and other extraction sites. Visitors drift through an assortment of such micro-environments, which often use lush, atmospheric visual production to invoke contested landscapes, but less often detail them. The overall result is a compelling but impressionistic kind of environmental poetics, in which specific sites and even the figure of the city dissolve into a mosaic of forces that have historically produced them: colonization, slavery, extraction, industrialization, and occupation.

The show does present some more familiar, less captivating display tendencies. The type of research-intensive exhibitions-within-the-exhibition represented by MSTC’s work and the Center for Spatial Research’s data visualization project Homophily: The Urban History of an Algorithm (2019) recurs. Parsing the didactics and diagrams in such projects requires considerable effort and a more focused viewership than the vast biennial affords. In addition, a number of architectural social spaces in the exhibition go largely un-activated. Reading rooms, workshops, and agoras by artists and designers like Adrian Blackwell, ConstructLab, Oscar Tuazon, and Wolff Architects all gesture powerfully toward acts of commoning and radical research. Yet even during the busy opening weekend, they held only sparse crowds, resembling a kind of relational-aesthetics still life.

All this is to say that while the exhibition at the Chicago Cultural Center crackles with the energy of critique and the allure of sumptuous aesthetics, a set of representational challenges arises from its embrace of explicit politics, rigorous research, and expanded forms of architecture, however welcome that embrace is. The most agile response comes in The Killing of Harith Augustus (2019), a collaboration between Forensic Architecture, the celebrated London-based research agency, and Invisible Institute, a Chicago-based investigative journalism organization. The project comprises an analysis of video footage of a 2018 police shooting and contests the Chicago Police Department’s official narrative that Harith Augustus, a black Chicago barber, was shot based on a legitimate “split-second decision.” The installation at the Chicago Cultural Center is centered not on the team’s meticulous frame-by-frame investigation of security and body camera footage, however, but on the choice to withdraw it from display. White wall texts in a black room describe the research and eloquently unpack the complicated decision not to show the footage here, though the rationale behind such abstaining is suggested most plainly and poignantly in an audio recording that plays on headphones: South Shore resident and poet Audrey Petty, speaking after the police originally released the source footage to the public, explains that she “will not watch a video of another black man being murdered by the police” and insists on privileging “other ways of engaging with the life of Harith.”

Forensic Architecture and Invisible Institute’s video analysis can, however, be viewed, but elsewhere. With the support of Augustus’s family, the project’s creators have made it available on Forensic Architecture’s website—and in a small, powerful exhibition at Experimental Station, a storied alternative cultural site on the city’s South Side. As of opening weekend, this installation was not noted in official biennial materials, but knowledge of it was beginning to circulate by way of printed cards and word of mouth. At Experimental Station, where a steady stream of viewers attended carefully to the evidence presented on several small flat-screen monitors in an upstairs room, this pointed dissection of a tragic event felt insulated from walk-by spectatorship and a slip into lynching spectacle. In the context of this venue—host to a community bike shop, garden, coffee spot, and bustling Saturday farmers market—these charged documents felt at least partially integrated into a community impacted by the incident.

The Killing of Harith Augustus is one of many highlights found on the geographic and institutional margins of the biennial. The former Anthony Overton School, a featured off-site venue and one of nearly fifty Chicago public schools that have controversially been closed in the past six years, hosts a series of installations. The result of a one-week summer intensive that brought international practices to the site, the installations are slight, but they draw viewers into the fascinating Creative Grounds project, of which these works are just a small part. Directed by Chicago’s Borderless Studio, this independent, long-term initiative produces workshops, design interventions, exhibitions, and events that are building community and driving thinking around vacant school repurposing. At Co-Prosperity Sphere, a cultural space in Chicago’s Bridgeport neighborhood, the gender equity advocacy organization ArchiteXX presents the exhibition “Now What?! Advocacy, Activism, and Alliances in American Architecture since 1968.” Originally in partnership discussions with the biennial, ArchiteXX announced in September its decision not to be officially affiliated, in order to highlight and protest the involvement of oil company BP as a founding funder. A public discussion held in the space, “Activism Within and Against the Biennial Complex,” coincided with both the biennial’s opening weekend and the Global Climate Strike’s occupation of Federal Plaza (just around the corner from the Cultural Center). It resonated deeply.

The biennial boasts more than a hundred partner venues throughout Chicago, and at community sites like these you can feel the project rubbing up against the city, negotiating a push and pull with the wider cultural environment. You can feel this, too, at the Chicago Cultural Center, where accomplished installations by Chicago-based practitioners like Maria Gaspar, Theaster Gates, and the Sweet Water Foundation represent ongoing community and activist projects in the city, even if they seem dislocated from their contexts. Palpable throughout the biennial is a sense of both the city and the event as living systems, mutually shaping one another and, above all, subject to reinterpretation and contestation.

This article appears under the title “Chicago Architecture Biennial” in the November 2019 issue, pp. 93–95.