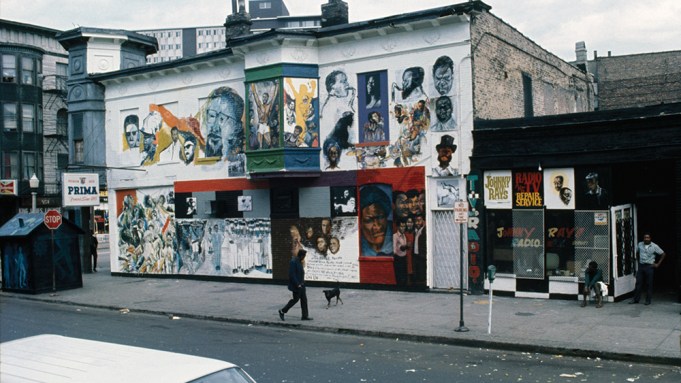 “Chicago is a very complicated place,” critic Peter Schjeldahl apologized in 1976, unable to draw any overarching conclusions in his report to Art in America on the scene in the Second City.1 His problem pales before the challenge faced by authors of a new volume covering a century and a half of art-making and institution-building in Chicago. Editors Robert Cozzolino, curator of paintings at the Minneapolis Institute of Art, and Maggie Taft, founding director of the Haddon Avenue Writing Institute in Chicago, enlisted Wendy Greenhouse, Jennifer Jane Marshall, Jenni Sorkin, Rebecca Zorach, and fifty-some other contributors to produce Art in Chicago: A History from the Fire to Now. Unlike previous surveys, their account emphasizes how women artists and artists of color have contributed to the city’s cultural life from its very beginnings and how political and social activism have constantly informed its artistic production.

In the nineteenth century, Chicago was an upstart crossroads of transportation and exchange, nervously looking east for established tastes. Collectors acquired art elsewhere; fine art offered an antidote to the city’s crass commercialism. Lacking patrons, artists formed supportive clubs and exhibition societies. The Chicago Academy of Design opened in 1866, later—under the patronage of tycoons like Charles D. Hamill and Marshall Field—morphing into the Art Institute of Chicago. Remarkably for the period, women were among the AIC’s faculty as early as 1881. One of them, the talented, short-lived Alice Kellogg Tyler, emerges as one of this book’s most exciting revelations. She also taught at Hull House, the social service center cofounded by Jane Addams and Ellen Gates Starr in 1889. Pervasive at the time was the belief that art could help elevate all segments of society. In this spirit, the Municipal Art League established a collection for schools and park field houses, and in 1905 a bequest from lumber baron B.F. Ferguson began to fund public sculpture.

In the early twentieth century, artists came and went, among them pioneering modernists Manierre Dawson and Raymond Jonson. Notable for his inclusion in the Chicago iteration of the Armory Show in 1913, Dawson had created his first abstract paintings in 1906. Given his thrilling promise, it is painful to learn how he quit the city—and art itself—in 1914 for his farm in Ludington, Michigan. Although the outraged reception of the Armory Show prompted New York painter Walt Kuhn, one of the event’s organizers, to dub Chicago a “rube town,” Jonson was among those inspired. He developed a rhythmic modernist style, before decamping to New Mexico in 1924. Other progressives welcomed modernism to the Arts Club, where contemporary art exhibitions—including Picasso drawings in 1923 and Guernica in 1939—alternated with Indian watercolors, Chinese bronzes and jade, and Polynesian antiquities. This ecumenical approach also characterized Helen Gardner’s textbook Art through the Ages (1926), which she wrote while teaching at the School of the Art Institute. Gardner transmitted a global perspective to her protégé there, Kathleen Blackshear. Legendary for SAIC field trips to the Oriental Institute and the Field Museum of Natural History, Blackshear inculcated in students an appreciation for world—not just Western—art.

In 1927, African sculpture was shown at the Art Institute alongside contemporary art in “The Negro in Art Week,” co-organized by the Chicago Woman’s Club and the Chicago Art League. Among the latter’s members was William McKnight Farrow, columnist for the Chicago Defender, who, like Alain Locke in the New Negro movement, embraced art as a means of racial uplift. Insisting on only positive images of African Americans, the League was often at odds with Archibald J. Motley, foremost painter of black life, including night life, on Chicago’s South Side. Other African American artists—Margaret Burroughs, Eldzier Cortor, Charles White—seem not to have been affected by this tension. Burroughs was a founder in 1940 of one of the most enduring institutions seeded by the Works Progress Administration’s Federal Art Project, the South Side Community Art Center. Costume balls, home decorating courses, and Gordon Parks’s South Side Camera Club made the SSCAC a cultural anchor.

Taft notes a robust camera culture in Chicago by this time, and describes how Harry Callahan, Arthur Siegel, and Aaron Siskind “used Chicago as a laboratory for picture-making.” All three taught at the Institute of Design, begun as the New Bauhaus in 1937, when the Association of Arts and Industries hired László Moholy-Nagy to establish a school on the European model. After only a year, the pragmatic Association withdrew its funding: businessmen wanted graduates with enhanced design skills, whereas Moholy-Nagy aimed to produce “more fulfilled human beings.” With private patronage, the school continued under Moholy-Nagy, accredited in 1944 as the Institute of Design, and later absorbed by the Illinois Institute of Technology. This episode is just one of myriad examples in Art in Chicago exposing the city as a hotbed of overlapping, sometimes competing interests eager to instrumentalize art, commercially, politically, and/or in the service of some moral or social program.

AROUND MIDCENTURY, Chicago’s fine artists began displaying their work in members’ annuals at the Arts Club, in the AIC’s “Chicago and Vicinity” shows, at the Renaissance Society at the University of Chicago, and in exhibitions organized by the No-Jury Society. They also, as Cozzolino recounts, assertively made their own way. In 1947 Cosmo Campoli, Leon Golub,  Nancy Spero, and others launched “Exhibition Momentum” in protest over that year’s “Chicago and Vicinity” show. They continued mounting such alternative exhibitions for ten years. Imagine their disappointment when AIC curator Katharine Kuh, invited to curate the American pavilion for the 1956 Venice Biennale, selected only one Chicagoan, Ivan Albright, privileging instead work created in New York. In light of this perceived indifference, local artists assumed “a contrarian identity in relation to the international art world.”

The Momentum generation rejected Abstract Expressionism in favor of figuration. Cozzolino describes this strain of postwar Chicago art as “abject, raw, fixated on the body, its physicality, and psychological states.” In 1959, Campoli, Golub, and H.C. Westermann were represented along with Alberto Giacometti, Francis Bacon, and Jean Dubuffet in Peter Selz’s “New Images of Man” at the Museum of Modern Art in New York. Dubuffet had made a historic impact in Chicago eight years earlier with his “Anticultural Positions” lecture at the Arts Club. Less well known is his fascination with Albright, whose reliance on urban detritus for subject matter would carry forward in Chicago art. Claes Oldenburg took this sensibility with him to New York in scrappy early projects such as The Street (1960). At the SAIC, Ray Yoshida conveyed a love for “trash treasures” and pop culture to students, among them Roger Brown, who explained how he and his fellows considered comics and advertising not simply as source material but as art equivalent to one’s own.

An enthusiasm for all aspects of visual culture informed artist-curator Don Baum’s lively exhibitions at the Hyde Park Art Center, beginning in 1956. There, the irreverent and often hilarious Hairy Who—including Gladys Nilsson, Jim Nutt, and Karl Wirsum—made their debut. Critics recoiled, dubbing the artists “delinquents” and their exhibitions the “crème de la phlegm.” Grouped with contemporaries who also showed at the HPAC and the Museum of Contemporary Art (founded in 1967)—Brown, Ed Paschke, Christina Ramberg—these artists became known as the Imagists.

Cozzolino posits a generational anxiety permeating Imagist art, relating, for instance, Nutt’s renderings of bound and mutilated bodies to reports of atrocities perpetrated in Vietnam. Anti-war sentiment registered powerfully in Chicago art, not least in reaction to the brutal crackdown during the 1968 Democratic National Convention, which prompted artists nationwide to propose boycotting the city until the end of Mayor Richard Daley’s term. Oldenburg, beaten by police along with other protesters outside the convention, canceled his exhibition at Richard Feigen Gallery. Instead, Feigen mounted an invitational directed against the mayor.

The Organization of Black American Culture (OBAC) arose in 1967, generating a famed gallery-of-heroes mural, The Wall of Respect (1967, destroyed,1971), on the city’s South Side. Members of AfriCOBRA (African Coalition of Bad Relevant Artists) embraced figuration, bold colors, and inscribed messages—features evident in paintings and prints as well as in clothing created by Jae Jarrell and tapestries by Napoleon Jones-Henderson. The latter studied with fiber artist Claire Zeisler, whose monumental sculptures echo African and other non-Western forms. Above all, AfriCOBRA spokesman Jeff Donaldson demanded an art “inspired by African people,” made “for people and not for critics whose peopleness is questionable.” In keeping with this drive for accessibility, murals proliferated as black, white, and Latino activist artists claimed walls throughout the city.

Also proliferating were alternative exhibition spaces, bolstered during this heyday of enlightened government patronage by funds from the National Endowment for the Arts. Breaking exciting new ground for women, Artemisia and ARC (Artists, Residents of Chicago) began as all-women galleries during the national upsurge of feminism in the 1970s. Artemisia thrived until 2003; ARC continues today, with exhibition opportunities for all genders. N.A.M.E. and Randolph Street Gallery contributed to the city’s developing performance-art culture. Interdisciplinary practices exploded in the 1980s, especially at the SAIC, where performance, sound art, video, and film were taught alongside electronics and generative systems.

Art in Chicago is a beautiful book on an unwieldy subject. Interspersed throughout are sidebars, edited by writer Erin Hogan, in which we learn, for example, about eccentrics such as Vivian Maier and Henry Darger, whose respective photographs and drawings became known only posthumously. Other sidebars treat Gertrude Abercrombie, jazz hostess and painter of quasi-Surrealist scenes, as well as topics like experimental music, art criticism, and the perennial problem of how to curate local artists into broader institutional missions.

This sampling format expands and takes over in a final chapter, a series of interviews and reflections assembled by Taft and consulting editor Judith Russi Kirshner to give a sense of the past two decades. Nick Cave joins Anne Wilson in conversation about their respective work in fiber; AIC curator Matthew Witkovsky writes about photographer Dawoud Bey. We hear from painters Julia Fish and Judy Ledgerwood, sculptor Richard Rezac, graphic novelist Chris Ware, video artist Gregg Bordowitz, community builders Dan Peterman and Theaster Gates. Painter Kerry James Marshall contributes a comic strip, “A Modern Saga of Love and Redemption,” wherein an amorous host shows his date a collection not of etchings but of tote bags from Chicago galleries and museums. In these five panels, Marshall brings the city’s art institutions into his very own love story. It is an ingenious finale to Art in Chicago, suggesting for the individual artist, as for the city itself, a necessarily rich and diverse ecology of art institutions large and small spawned by both elite and impassioned grassroots interests.

Inevitably in a book of this scope, oversights occur. Lamentably, there is no bibliography. One would have welcomed some acknowledgment of the important programming at the Chicago Cultural Center, a real boon for Chicago artists especially from the 1980s to the aughts. We have barely a word about the late Dennis Adrian, a brilliant and tireless critical advocate for Chicago artists. Absent too is gallerist Phyllis Kind, who showed self-taught artists along with the Imagists they inspired. Perhaps these omissions are intended to correct a common perception of Chicago art as cartoonish and idiosyncratic, but the conceptual art, cerebral abstraction, and community-based social practice showcased in the final chapter already redress the balance. These issues aside, Art in Chicago surpasses all previous accounts of the city’s artistic heritage. Unintimidated by the immensity of the task, its editors have matched their subject in ambition, inclusiveness, and verve. If you are a Chicagoan, this history will make you proud; if not, it will offer useful models for inventiveness and self-determination. If you are among Chicago’s exiles named or unnamed in this book—Jerry Saltz, Robert Storr, Alice Thorson, yours truly—it may, even if fleetingly, make you homesick.

Billie Eilish Has Started Working on Her Next Album