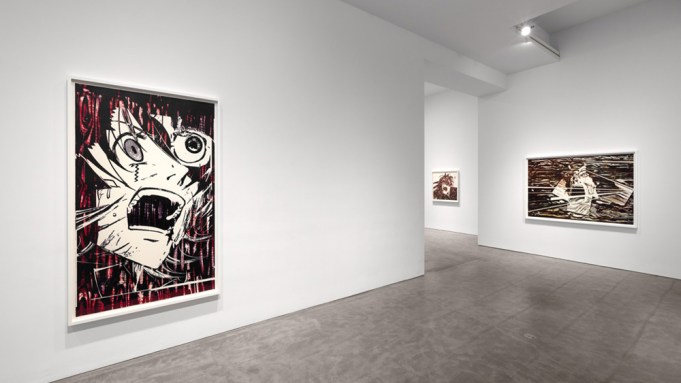 War movies perform a clever trick: they create coherent, digestible narratives out of incomprehensible violence. Christian Marclay inverts this cinematic alchemy in his video 48 War Movies (2019), which premiered at this year’s Venice Biennale and served as the centerpiece of his Paula Cooper show. The work comprises forty-eight war movies edited together so that they play simultaneously atop one another at increasingly smaller sizes, each window covering all but the outer edges of the underlying one. The result is forty-eight concentric rectangles composed of moving images. The source movies portray conflicts ranging from the American Civil War to the ongoing fighting in Iraq. At moments, recognizable images flit across the thin frames, as if passing by a cracked door: a Confederate uniform, a Vietnam-era helicopter, a World War II flag. Mostly, the slivers of footage merge into a mesmerizing, incoherent throb of colors that creates the effect of looking down an elevator shaft lined with flashing lights.

Each of the movies plays on its own loop, the work cycling through an effectively endless number of permutations in an ongoing chance operation. The viewing experience could almost be meditative if not for the jarring cacophony created by the forty-eight soundtracks playing at once. The screams, gunfire, plane engines, and explosions are only intermittently broken up by fragments of music: martial fanfares, rock and roll, and Hollywood scores. An occasional scrap of dialogue—usually an expletive-laden order or cry for help—rings out over the noise, but for the most part the audio is an indecipherable wall of sound. The clamor combines with the strobing colors to trigger a sense of panic; the gallery becomes a kind of extreme video arcade, assaulting the viewer with simulated valor and violence.

Fifteen large-scale woodcut prints depicting the faces of comic book and manga characters frozen mid-scream—as if responding to all the violence—hung in the galleries outside the screening room. Marclay printed the works in multiple passes, producing compositions that exhibit a slight 3D effect due to inconsistent registration among the printings, and that display muddy hues evoking blood, char, and dirt. For his printing matrices, Marclay used sheets of plywood or composite board whose surfaces he had carved with a CNC router. The former material’s grain and the latter’s patchwork texture create beautiful patterns in the prints that simulate rushes of motion around the faces. While the images directly evoke Munch’s Scream (1895), they also bring to mind the woodblock prints that German Expressionists made in reaction to the horrors of World War I. But unlike those prints, Marclay’s lack any real feeling. They convey the ersatz emotion found in action comics, just as 48 War Movies employs the fictionalized violence of war movies.

Marclay has long created works using appropriated footage and audio. He is perhaps best known for The Clock (2010), a twenty-four-hour-long video for which he compiled movie clips that include images of clocks or watches or mentions of time, and spliced them together in sequential order according to the times being noted. In that work, Marclay built his own coherent arc using sequences from other people’s movies. In 48 War Movies, he does almost the opposite, by abstracting his source material into something nearly unrecognizable. The result is unpleasant but affecting. Watching the video, we are besieged by a particular kind of violence: that of our popular imagination.

This article appears under the title “Christian Marclay” in the November 2019 issue, pp. 95–96.