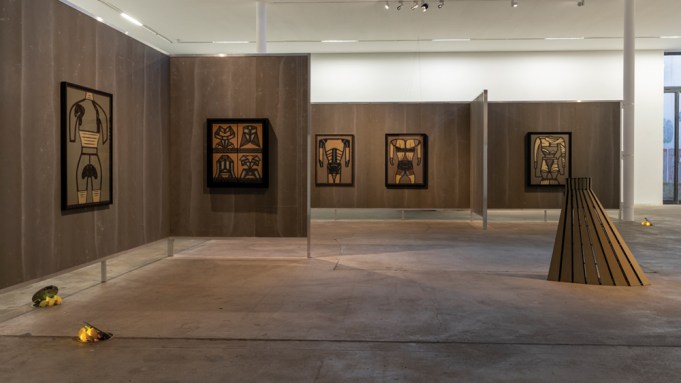 Most visitors to “The Making of Husbands: Christina Ramberg in Dialogue” probably weren’t familiar with the exhibition’s protagonist, an artist primarily associated with the Chicago Imagists who died in 1995 at the age of forty-nine and who remains relatively obscure even to American audiences. Those of us not already in the know can count ourselves lucky that Ramberg’s work has been slowly but steadily gaining institutional visibility over the past decade. The KW exhibition—whose title referred (somewhat perplexingly) to a documentary on John Cassavetes—served two purposes at once. For the uninitiated, it offered an introduction to Ramberg’s oeuvre by bringing together a limited but incisive selection of her paintings and drawings. At the same time, these works were installed alongside works by Ramberg’s peers as well as younger artists, establishing a network of open-ended affinities for viewers to ponder.

Chief among the show’s achievements was its ability to suggest such links without diluting Ramberg’s own potency. From the mid-1960s on, Ramberg cultivated a brand of figuration that combined a Pop sensibility with graphic, mechanistic forms (one can sense a range of influences, but Léger is particularly present) that she deployed, rigorously and pointedly, in somber renderings of cropped female bodies. The show crescendoed from a scattering of early pieces to a succession of paintings from the mid- to late ’70s installed in the final, expansive room. The central motif in the latter work is the disarticulated female torso. Instead of flesh, Ramberg gives us hardness: ultra-flat masonite surfaces, closed shapes edged with precise shadows, and tight, symmetrically derived compositions. In paintings such as Tight Hipped (1974) and Glimpsed (1975), the body has stiffened into constructions that resemble padded dress forms, whose parts are squeezed further by locks of hair wrapping around them. Others, such as the diptych Sleeve Mountain #1 and #2 (1973), allow the same formal vocabulary to drift away from the figure proper, though they are haunted by it nonetheless. Within the installation’s sweep, the sense of binding and constraint conveyed in each image gave way to flux as the paintings’ parts appeared to morph and be redistributed from one picture to the next.

The meat of Ramberg’s thinking became most apparent in a selection of small drawings made in pen on notebook pages or scrap paper. In these images, we witness the artist working through possible permutations of the same form—arrangements of fabric bustier components, bending knees, hair-braiding patterns. Flexing and folding across the page, these parts begin to assume qualities of the whole bodies to which they refer, even as they remain eerily other to them. Indeed, throughout the works on display, bondage, repetition, and reconfigurability fused in a trenchant vision of gender and the technologies that regulate it, one in which the tools of constriction are reconstrued as the basis of an energetic variability.

Works by an eclectic group of thirteen additional artists were interjected throughout, building a context for Ramberg’s practice that was generally thematic rather than historical, though a handful of pieces by her Midwestern contemporaries suggested a sense of a local conversation in which her work participated. For instance, Diane Simpson’s Box Pleats (1989), a sculpture resembling a free-standing skirt composed of wooden slats, might have walked out of one of Ramberg’s paintings. Most of the additional works picked up on the themes of gender, mass production, and embodiment that Ramberg’s work explores, yet aimed their focus in slightly different directions. Especially compelling in this regard were pieces by Gaylen Gerber and Ghislaine Leung that extended Ramberg’s dissection of bodies and their accoutrements to the apparatus of the institutional exhibition itself. A painter of Ramberg’s caliber doesn’t need the company, but her work nonetheless benefited from being in the constellation this exhibition provided, which, by bringing her into a range of dialogues, exposed the richness at the base of her strict endeavor.

This article appears under the title “’The Making of Husbands: Christina Ramberg in Dialogue’” in the January 2020 issue, p. 86.