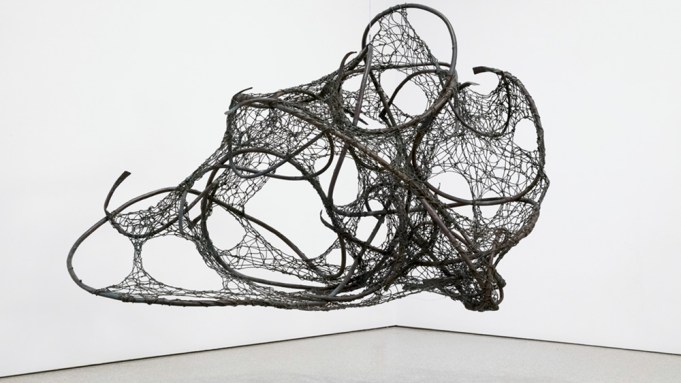 The title of “Claire Falkenstein: Matter in Motion” took its terms from the artist herself, who spoke freely of the energy that ricochets through the universe and animates matter. Born in 1908 in coastal Oregon, Falkenstein was raised in Berkeley and did her undergraduate work in art, anthropology, and philosophy at the University of California, Berkeley. She moved to Paris in 1950, becoming a member of the heady, expat-filled art community there, and in 1963 settled permanently in Los Angeles. Falkenstein’s biography is littered with the names of male artists (she took a master class with Alexander Archipenko at San Francisco’s Mills College, where she met László Moholy-Nagy; taught at the California School of Fine Arts with Clyfford Still, who became a close friend, and Richard Diebenkorn; socialized in Paris with Sam Francis and Mark Tobey) whose work has garnered more significant art historical attention than hers has. Michael Rosenfeld’s show of fifty-six sculptures, paintings, and works on paper illuminated an oeuvre that should be as visible as that of peers David Smith, Isamu Noguchi, and Louise Nevelson, with which it seems in dialogue.

Laid out in a rough chronology from the 1930s through the 1970s, the exhibition began with two paintings on convex aluminum-on-wood structures. With their sleek sculptural forms and metal surfaces, these pieces recall wartime technology. One of them, Aerial (aka Floating I, 1947), whose left and right edges curve out seven inches from the wall, plays with points of view: the composition—which consists of angular forms in green and gray paint and a matrix of incised lines—suggests topography seen from an airplane and, given the shaped support, opens up or becomes obscured to varying degrees depending on the viewer’s standpoint. Some of the early works in the show, such as Sign of the Spiral (1940), were compact, earth-toned ceramics in which curving or faceted forms hint at Falkenstein’s later strategy of incorporating negative space into sculpture. Other early works, from 1935 to 1943, were abstract paintings and wooden sculptures combining squiggling biomorphic and surrealist shapes recalling those in Charles Howard’s paintings, an influence of hers.

In Paris, Falkenstein began to work in wire, which lent her sculpture a buoyancy and a formal affinity to organic material: coral, rocks, bones, flora seen under a microscope. She gained visibility in part due to critic Michel Tapié, who was advocating for un art autre that could oppose the hardening of abstraction into academic style and who exhibited, bought, and wrote about her work. Tapié saw Falkenstein’s wire sculptures as being wholly original and having a compelling inchoate appearance. Unlike the process-oriented, psychologically driven Abstract Expressionists in the United States, Falkenstein routed her work through theories of space-time, relativity, physics, and the expanding universe that were then in vogue in Parisian intellectual circles. Her wire “Sun” sculptures render inner and outer space a continuum, their walls becoming their interiors. Among the examples in the exhibition was the large-scale Sun XIV (1958), a suspended cluster of copper arcs strung with spiderweb-like knitting of copper wire. Like the aforementioned convex paintings, Falkenstein’s “Suns” impel us to notice the formal shifts that result when viewing them from different positions.

None of the jewelry Falkenstein crafted over several decades was on view, nor was there any sign of her many major public commissions. The latter works include the colored-glass-bejeweled welded-iron New Gates of Paradise (1960) for Peggy Guggenheim’s Venetian palazzo, and doors, gates, and sculptural stained-glass windows (1968–69) for St. Basil’s Catholic Church in Los Angeles. Such projects suggest full realizations of Falkenstein’s lifelong goal of uniting the functional with the aesthetic, of opening sculpture to lived space and connecting person, artwork, and nature.