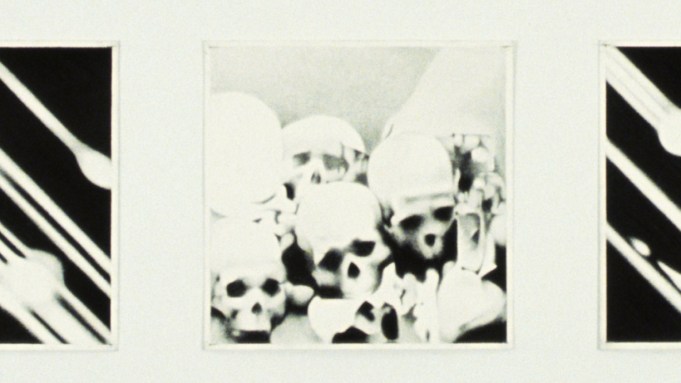 When a major museum decides to absorb a collection as a gift, the inherent question of its owner’s taste — a tar pit of concerns that are nonetheless significant in interpreting its selection and formation — fall under close scrutiny. The Judith Rothschild Foundation Contemporary Drawings Collection, accepted in its entirety by the Museum of Modern Modern Art in 2005, was not a private collection acquired over the course of Rothschild’s lifetime. Rather, it is a vast trove of twenty-five hundred drawings amassed posthumously by Harvey S. Shipley Miller, a trustee of the Rothschild Foundation, with the aid of two advisors: André Schlechtriem and Gary Garrels. Thus not liable to the scrutiny of one person’s taste, the collection prompts a reflection, in some small but essential way, on the life of the person whose estate was devoted to making such an extraordinary gift possible.  “Compass in Hand: Selections from The Judith Rothschild Foundation Contemporary Drawings Collection,” a group of 354 works by 177 artists on view at MoMA, has its fair share of problems in giving credit where credit is due.

It is surprising that neither the exhibition’s catalogue nor the forthcoming catalogue raisonné makes a concerted effort to discuss the relevance of the donor’s career or her wishes for this extraordinary gift. Perhaps this is due to the fact that her trustees were left to decide how to best disburse the proceeds of her estate, which included works by Mondrian, Matisse, Brancusi, Gris and Picasso. Or, maybe this is because the career of Judith Rothschild, an abstract painter who painted for fifty-five years and whose work was collected by major institutions (including MoMA, the Met, the Whitney and the Guggenheim Museum, among many others) has largely been forgotten since her death in 1993.  Historically speaking, drawings have always been under-priced. The rapid formation of this vast collection is an economically-exploitative time capsule and a testament to drawing’s status as the underdog of the art world. Nothing diminishes the fact that the Rothschild Collection is the largest gift of drawings ever made to MoMA; “Compass in Hand” is the largest drawing exhibition ever mounted in its galleries.

Building the collection was akin to continuously firing a loaded shotgun at the art market between 2003 and 2005. For all the self-congratulatory, back slapping heroics discussed in the catalogue, the idea that this collection is about a brief moment in time is questionable: for example, Miller and Garrels also purchased several drawings from the 1960s and 70s.  It’s unfortunate to have to simply write off this method as an unscrupulous attempt to collect en masse, or as the gilded shopping spree of a well-heeled trustee and his curator friends. Unfortunately, there’s little evidence to suggest otherwise. The good news is that regardless of so many concerns about the nature of its formation, the selection of drawings on display is a rambunctious visual delight, overflowing with beauty and curiosity. Turn one corner of the gallery, and another reveals a vast sea of works. “Compass in Hand” presents the drawings as if they were washed up on a shore with a few weak attempts to coherently organize them.

The most admirable aspect of the gift (and MoMA’s decision to accept it) is the fact that 340 new artists were introduced to its permanent collection. Understandably, Miller and Garrels took different steps to acquire the drawings, from buying directly from artists and dealers to purchasing an entire collection. In reality, the collection was tailored for MoMA in consultation with director Glenn Lowry and Mr. Garrels, the then head of the department of drawings. Works on paper by Rosemarie Trockel and Sigmar Polke, for example, were intended to deepen current MoMA holdings. The very first work of art acquired was Thirty Years Old (2002) by Chloe Piene. The ravishing drawing, once unrepentantly sexual and sinister, rendered with an aching, faintly quivering line is buried on a cluttered wall three-quarters of the way through the exhibition. As a meditation on masturbation as an analogous procedure to drawing — and as a piquant ode to youthful vanity — there’s no doubt that it was a fine first step for a collection of contemporary drawing whose works were made by artists still working within the first decade of their careers.

A recent book survey of contemporary drawings defined the medium as a “mark-making process used to produce a line-based composition.”  With such a threadbare constitution,  “Compass in Hand” had the opportunity to present a new way of thinking about drawing. Unfortunately, the confusion was only compounded by poor decisions, such as the inclusion of megalomaniacal works by Jim Lambie, Nate Lowman and Kelly Walker, which are in turns lacklustre extravaganzas, vacuous ramblings, and somewhat questionable choices in terms of their inclusion as drawings. Examples of Robert Gober’s work seem like they were lifted from a studio garbage can. John Cage’s inclusion is less a work of art, and more a bland chart (not that there’s anything wrong with charts or the ambiguity of a drawing as a drawing). To wit, Felix Gonzalez-Torres, the Cuban-American artist who died of AIDS in 1996, is represented with one haunting work. Untitled (t-cell count) (1990) is a piece of graph paper on which a line is drawn with a startlingly steep slope. This stark drawing is the representation of the end of one’s life, not a sweeping dramatic foreshadow, but a solitary line that signifies the progress of a fatal disease and a crushing loss of control.

The installation itself has problems. A stunning series of drawings by the artist Banks Violette, for example, were mounted above a doorway, as was the sole exhibited drawing of Ed Ruscha. At first glance one component of Violette’s lines of wreckage (love songs for assholes) #2 (2003) did not appear oriented correctly on the wall-that’s how far away they were. It turns out that it was in fact a mistake — the image of the toppled Kurt Cobain, second in the multi-part work from the left was hung 90 degrees off kilter.  Among contemporary American artists and draftsmen, Ruscha and Violette continue to produce lushly shaded work on paper; to have their artwork affixed to a wall fifteen or more feet in the air as if they were mere ‘Exit’ signs was a perplexing decision. No drawing in an exhibition should be unapproachable by its viewer, especially ones as carefully rendered as the aforementioned.

There is no doubt that MoMA is grateful for the collection, but as the adage goes: “To those whom much is given, much is expected.” To exhibit all of its holdings would require seven shows equal to the size of the current display. Alas, even the catalogue raisonné of the Rothschild Collection does not feature many (if not most) of the collection’s holdings. Institutional and publishing constraints notwithstanding, it would be a travesty if any of the twenty five hundred drawings were to yellow away unseen in flat file cabinets. As a curatorial project intended to show off the collection’s riches, “Compass in Hand” is a disorienting slipshod of a mess, an almost inevitable failure given curator Christian Rattemeyer’s attempt to organize such a large body of work. Despite the imperfect mash up, it is a great joy to savour the capacity of drawing to refresh and renew its relevance to such a diverse range of practitioners, and reflect on its indispensable role in contemporary art at large.