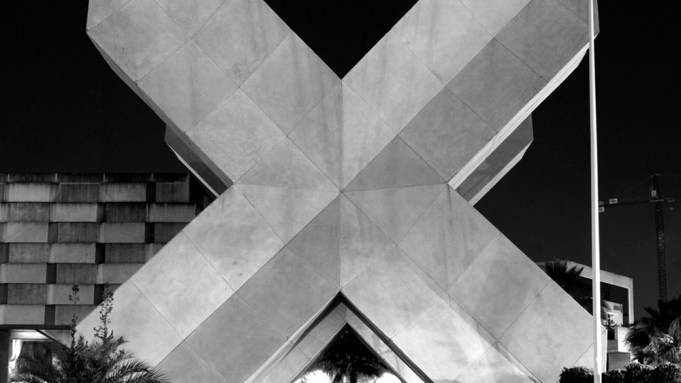 The centerpiece of Barnsdall Art Park is Frank Lloyd Wright’s Hollyhock House, a seminal example of Mayan Revival architecture, its form and ornamentation derived from Mesoamerican structures. A fragment of an unrealized arts complex that heiress Aline Barnsdall commissioned Wright to design, it has stood for nearly a century as a monument to modernism while the park and the city evolved around it. The interplay between the house and the surrounding patchwork of newer buildings (including hospital facilities on Sunset Boulevard that block part of the formerly commanding view) and other relatively recent arrivals (perimeter fences around the house, homeless encampments nearby) attests to the fundamental tension between modernism’s totalizing visions and the patterns of adaptation to which pieces of architecture inevitably succumb.

“Condemned to Be Modern” at the Los Angeles Municipal Art Gallery (which occupies one of the newer buildings in the park) tapped into this tension. On view as part of the Getty Foundation’s Pacific Standard Time initiative, it featured works by twenty-one artists interrogating the legacies of architectural modernism in Latin America. From the entrance, sculptures and models by Leonor Antunes, Héctor Zamora, and others caught the eye, but the show’s characteristic feel emerged from a steady toggling between artworks in two other registers: videos and archives. The videos provided extended explorations of individual sites: Melanie Smith’s Fordlandia (2014), for instance, serves as a portrait of Henry Ford’s failed Amazonian rubber plantation, while Tamar Guimarães’s Canoas (2010) highlights a landmark Oscar Niemeyer residence and the servants who maintain it.

A handful of videos showed performers engaging with particular sites—Clarissa Tossin’s newly commissioned Ch’u Mayaa (Maya Blue, 2017), for example, features dancers activating the spaces of Hollyhock House—and diagrams and video renderings from Eduardo Abaroa’s project “Total Destruction of the Anthropology Museum” (2012–17) laid out a provocative proposal for architectural violence, but only one piece portrayed actions that came close to leaving any actual trace in the built environment. Mexican collective Tercerunquinto’s installation Dismantling and Reinstallation of the National Coat of Arms (2008) documents a piece the members staged on the fortieth anniversary of Mexico’s 1968 Tlatelolco massacre: a video chronicles the participants’ removing of a huge marble seal from the Department of Foreign Affairs in Mexico City, and a one-to-one photograph shows the hole left behind until they restored the seal twenty-four hours later.

Despite the incendiary title, “Condemned to Be Modern” took a subdued approach to its politically charged subject matter. Where many of Pacific Standard Time’s flagship exhibitions traded in political images of people—such as radical women artists, queer Chicanxs, activists from the magazine La Raza, and the allegorical figures of  LA muralism—“Condemned” privileged more ambiguous buildings. Little effort was made to establish a context for the architecture—there were no timelines of Latin American history or maps of sites to sketch out the conflicts that the featured buildings emerged from and the forces that went into their construction. Images of these iconic sites of power might need no introduction in their countries of origin, but in Los Angeles the political background would have been less known. Rather than tell the story of the Latin American modernism that the works in the show responded to, “Condemned” was designed to produce a fragmentary, constellated, mediated portrait. Skeptical, poetic, and often personal, it was deeply compelling.