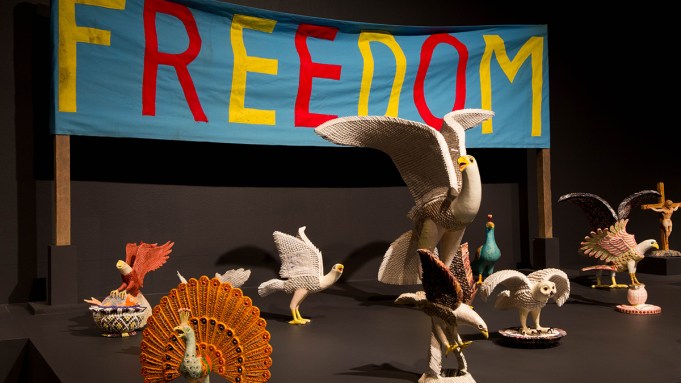 On June 6, 1993, a freighter named the Golden Venture ran aground off New York’s Rockaway Beach, and its passengers—286 migrants mostly from China’s Fujian Province, along with their handlers—scrambled ashore. The exhibition “Fold: Golden Venture Paper Sculptures,” on view at the Museum of Chinese in America (MOCA) through March 25, showcases folded-paper sculptures made by a number of the men on the ship while they were being held at a medium-security prison in York, Pennsylvania.

The migrants, having paid or made down payments on the roughly $40,000 fee charged by their traffickers and embarked on the harrowing trip in February 1993, arrived in the United States at an especially inopportune time. Still in the early months of his administration, President Bill Clinton attempted to appease conservatives by barring the migrants from posting bail—a departure from the usual catch-and-release policy, under which such arrivals were let out on bond with a hearing date. (This change in immigration policy persists today.) As a result of Clinton’s action, 119 men were bussed to York County Prison, and a dozen women went to Louisiana’s Orleans Parish Prison. Others ended up in jails in Mississippi and Southern California, or were deported. Ten had died jumping ship when the freighter crashed.

In York, the men spent three years and eight months in confinement, passing the time by carrying out their own version of zhezhi, traditional Chinese paper-folding. Taught by theater set designer Lu Zhong Wu and four others, one of whom was a professional rug weaver, the skill became the basis for a competition between teams of fellow ex–Golden Venturers, who lived in separate holding pods. Under the watch of compassionate guards, the men concocted assembly-line productions to make their pieces. They showed off innovations—like using thread from prison towels to create tassels for a lantern—to one another through small prison windows. To attain certain forms, such as the hull of a Fujianese ship, they held the paper in place with a paste made of toilet paper and soap. Eventually they were allowed to use actual glue.

The polish of the thirty-nine works at MOCA reflects the coordinated efficacy of each group’s work. Along a wall in the museum’s north gallery sit various birds: an owl, two peacocks, and several alighting eagles, close studies of the Americana of Franklin Mint catalogues. For each work, many pieces of paper cut from magazines or legal pads were repeatedly folded in triangular shapes and fitted together. The birds are flanked by sailboats, bonsai trees, an elaborately fashioned container with dragons, a pineapple (a Chinese symbol of royalty and prosperity), a Buddha, and a nine-inch bicycle with its chain coming off, all made from a combination of folded paper and papier-mâché.

Weekly vigils were held outside the Pennsylvania prison, attended not only by human rights activists but also by pro-lifers, who came in support of the migrants’ escaping the forced sterilizations and abortions carried out under China’s one-child policy. These new friends brought additional art material like gold foil, plastic beads, and graph paper. These sculptures became gifts for the protesters and pro-bono lawyers or were sold to raise funds to buy more paper and send money to relatives. They were even brought to court, to try to win sympathy for the detainees.

Only one object in “Fold” was made by a woman: a four-paneled, nine-inch-tall greeting card constructed of repurposed book covers. It was spirited out of Orleans Parish Prison by a sympathetic released prisoner, who mailed it to Demian Yumei, a musician and supporter in York. The card’s exterior features a basket of tree peonies drawn in pencil and crayon. Along with effusive well-wishing in English cursive, there is the following poem in Chinese:

The spirit of venture

Every color is new

The joy expressed in the poem contrasts with the setting where it was written. Orleans Parish Prison is considered one of the worst jails in America; the female inmates from the Golden Venture were regularly shackled or put into solitary confinement. The card’s creator and other passengers of the ship were transferred to a facility in Lerdo, California, where they were held until the Vatican intervened and arranged political asylum for them in Ecuador.

“Fold” also includes videos that give additional context. Peter Cohn’s eye-opening documentary Golden Venture (2006) follows the lives of four of the men after their release. One was a food delivery man in rural Pennsylvania; another owned a Florida restaurant and labored seven days a week, dreaming one day “to work as much as a regular American”; a third was in China preparing his third attempt to enter the US; and a fourth was haunted by enormous debts. Photographs and other archival materials fill out the show. Notable events among MOCA’s public programming for “Fold” include workshops with 18 Million Rising and the New York Asian American Bar Association and tours for law students and Chinatown-based groups.

None of the Golden Venture paper-folders ever became professional zhezhi artists, and those whose works the museum offered to help restore declined. While these objects may seem rare and wondrous to us, they are reminders of a humiliating time for their creators. Most of the artists in “Fold” have requested their names be withheld from the exhibition materials, citing anxiety concerning the present political environment and stricter immigration policies. And although fifty-three were released on bond or INS parole, thirty-five received asylum, and fifty-three were released on parole by Clinton on February 14, 1997, only five directly benefited from artist visas.

If DACA—the Deferred Action for Childhood Arrival policy, which the Trump administration plans to phase out—is to be more than a five-year anomaly, there must be grassroots developments to support migrants. This was the case with the Golden Venture incident, which, due to the number of passengers sent to York, exposed Pennsylvania residents to issues concerning the immigration detention system. Their curiosity, sense of justice, and desire to problem-solve, in turn, brought the migrants to the attention of a national network of organizations that work on detainees’ rights. Though the migrants were unlucky pawns in a political game, their misfortune ignited advocacy for reform. The flow of smuggling ships has decreased with crackdowns and tighter asylum rules, but human trafficking remains a lucrative trade. Snakeheads, as Chinese traffickers are known, have turned to air and land routes, charging Fujianese up to $70,000 for the trip, according to a 2009 report from the Los Angeles Times.

Two seven-tiered folded-paper pagodas make impressive pillars in the exhibition’s main gallery. One stands four-and-a-half feet tall, with a Chinese inscription that translates as: “The tower of eternal gratitude, many miles I travel to search for freedom, saviors I met when in desperation and tribulation.” It celebrates the deep friendships and connections the men made in York. The other pagoda contains an internal staircase, which provides the same sturdy support as the backbone of people who survive as well as they dream.