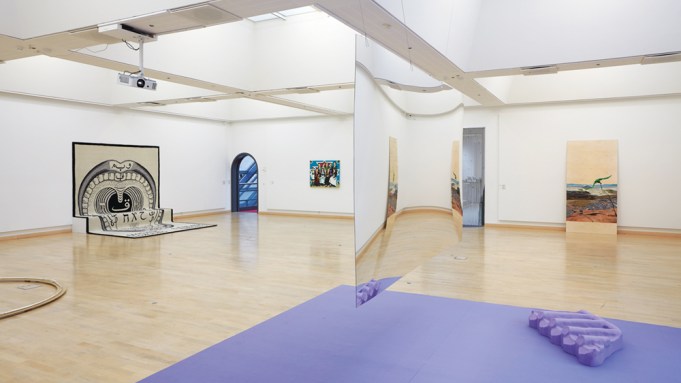 Grappling with a flu pandemic and the aftermath of a volcanic eruption, Iceland declared independence from Denmark in December 1918. One hundred years later, the fourth edition of the annual Cycle Music and Art Festival in Kópavogur, Iceland—a town just south of Reykjavík—opened under conditions of environmental and political duress. Organized by the Stockholm-based independent curator Jonatan Habib Engqvist and Cycle’s creative director, Guðný Guðmundsdóttir, this year’s festival was dedicated to the theme “Inclusive Nation,” taking up conversations around diversity and representation that are familiar to artists in the United States but relatively new to Iceland. The heart of the multi-venue event was a group exhibition at the Gerðarsafn museum, ironically titled “Exclusively Inclusive.”

The curators sought to illuminate connections between Iceland’s colonial history and contemporary struggles in other parts of the world. Unlike many biennial-style exhibitions, “Exclusively Inclusive” did not note the artists’ nationalities on the wall labels. Nonetheless, some of the memorable works drew upon—or openly flouted— conventions of nationalism and site-specificity. Julius von Bismarck and Julian Charrière’s Kunst (2013) exemplified site-specificity gone wrong. For the performative project, the two artists spray-painted identifying words (like “crater”) on landscape features in a remote part of Iceland. Their artistic gesture disrupted the growth of 30,000-year-old moss, leading to accusations of “nature terrorism” from civilians and police alike. Alongside photographs of these spray-painted tags, the exhibition included hate mail sent to the foreign artists. Nearby, a video documented Icelandic artist Anna Rún Tryggvadóttir’s new land art sculpture Þingvellir Turning (2018), which comprises a small, slowly rotating circle of land in Þingvellir national park, the site of the world’s oldest parliament, Alþingi. Established in 930 ce, Alþingi is located in a dramatic valley in southwestern Iceland where the North American and Eurasian tectonic plates meet. Days after Tryggvadóttir unveiled the work to the public, the motor under her plot of land froze and stopped turning. The interruption reminded visitors that Earth adheres to its own seasonal cycles, which may not always cooperate with artistic ambitions.

Several works in the show focused broadly on themes of language and displacement. The Eurasian collective Slavs & Tatars’ carpet piece Mother Tongues and Father Throats (2012) features an image of a human mouth showing where to place the tongue to pronounce each letter in the Arabic alphabet as well as the guttural sounds “gh” and “kh” in Cyrillic and Hebrew. The work addresses notions of regional difference and sameness, and Orientalist tropes of magic carpets. Across the room, the curators installed Mother’s Tongue (2018), a standout video and sculptural installation by the Swedish artists Lap-See Lam and Wingyee Wu concerning the history of a dilapidated Chinese restaurant in Sweden. The video—detailing three generations of Chinese diasporic struggle from the perspective of the restaurant itself and projected onto a suspended mirror—gives a sci-fi twist to the first-person immigrant story.

Hip-hop’s universal appeal as a language of resistance emerged as Cycle’s subtheme. Adjacent to a video of Joseph Beuys’s antiwar pop song “Sonne statt Reagan” (1982), the exhibition featured three music videos for covers of Childish Gambino’s hit “This Is America” by musicians from France, Nigeria, and Turkey. Just as the original song illustrates the problems of gun violence and police brutality in the United States, these versions featured verses the performers penned about corruption, gentrification, and racism in their respective nations. As part of Cycle’s musical programming, the duo Ólafur Ólafsson & Libía Castro presented, at Kópavogur’s Salurinn concert hall and attached music school, an open rehearsal for their participatory opera, Searching for Magic. The artists invited composers to create interpretations of the unpassed, progressive 2011 Icelandic constitution, which stipulated such protections as freedom of information on the internet, a broad social safety net (including parental leave and social security), and conservation of natural resources. Featuring local amateurs ranging from teen rappers to a death-metal singer to a bell choir of people with disabilities, the emotionally moving performances in the opera reminded us that music can facilitate radical means of inclusion.