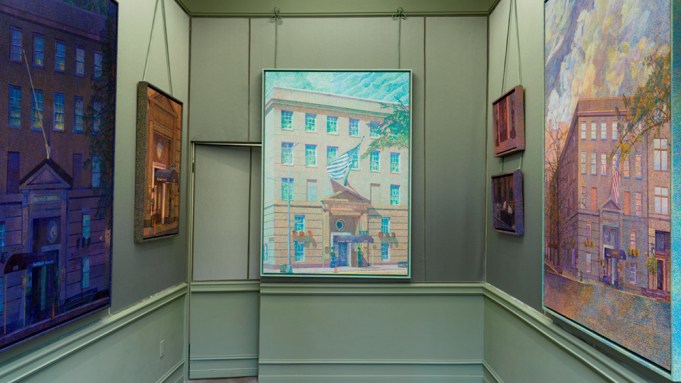 I don’t remember much about the interior of the Frank E. Campbell Funeral Chapel—I was there, after all, for my grandmother’s funeral, not to take a tour—but the musty elegance of Cynthia Talmadge’s approximation in “1076 Madison” seemed about right. Collaborating with the design firm Charlap Hyman & Herrero, Talmadge transformed the pint-size Chinatown gallery 56 Henry into a simulacrum of a sedate uptown parlor room, replete with silk wallpaper and velvet trim in shades of pistachio, plush dove-gray carpet, and crown moldings. Dangling on the walls from matching silk cords were eight new paintings by Talmadge (all 2018), each rendering a different view of the Upper East Side building’s facade in an exacting pointillism.

Campbell, who opened his funeral chapel in 1898, was something of an industry pioneer, offering well-off New Yorkers an alternative to funerals at home. When the body of silent film star Rudolph Valentino arrived at his doorstep in 1926, Campbell recognized an opportunity: he alerted the press and hired paparazzi to stake out the public viewing. The resulting media frenzy cemented the parlor’s reputation as—to quote the exhibition statement—“the only place a member . . . of New York society would be caught actually dead.” Jackie Kennedy, Leona Helmsley, Rita Hayworth, Biggie Smalls: even in death, the rich and famous demand the best.

Talmadge’s work is often preoccupied with these sorts of abject status symbols. Her first solo show, “Leaves of Absence,” held at the gallery in 2017, featured photographs of staged tableaux that reimagined the patient bedrooms at high-end rehab facilities and psychiatric hospitals as catalogue portrayals of Ivy League dorm rooms, each outfitted with branded pennants, sweatshirts, and canvas totes in a palette of soothing pastels. Though Talmadge’s suggestion that the idle rich can turn anything into an opportunity for conspicuous consumption, even addiction and death, isn’t entirely invalid—remember the reality show “Celebrity Rehab”?—there is something callous, bordering on cruel, about the ironic, stylized posturing of these works. The image of a Promises tote bag as a grotesque class signifier isn’t quite so hilarious if you’ve watched someone relapse within days of completing a thirty-day stint, and however absurd the idea of an elite funeral home, it’s still a place where people go to mourn.

Though the press release notes that Talmadge began the paintings in “1076 Madison” after a series of recent deaths in her immediate family, death is barely even approached in these works: there are no paintings of funerals, only of the building’s tastefully ornate architectural fixtures. Like the work of the Post-Impressionists she invokes, these are as much studies of light and color as depictions of a specific place. Three large paintings capture a view of the building from across the street at noon, dusk, and night, respectively: in the first, it’s bathed in bright sunlight, dotted with confectionary flashes of pink and mint green; in the last, Talmadge shrouds the facade in moody blues. The more subtly striking works here were a set of smaller close-ups that emphasize moments of uncanny banality: Frank E. Campbell (February Thaw) homes in on the dirtied remnants of a snowfall on the Manhattan sidewalk, an unsightly fire hydrant contrasting with the funeral parlor’s manicured topiary; View from 81st Street depicts the security cameras that flank a bronze placard: “Frank E. Campbell, The Funeral Chapel.” The funeral chapel. I couldn’t help but like the paintings, but the show left me queasy.