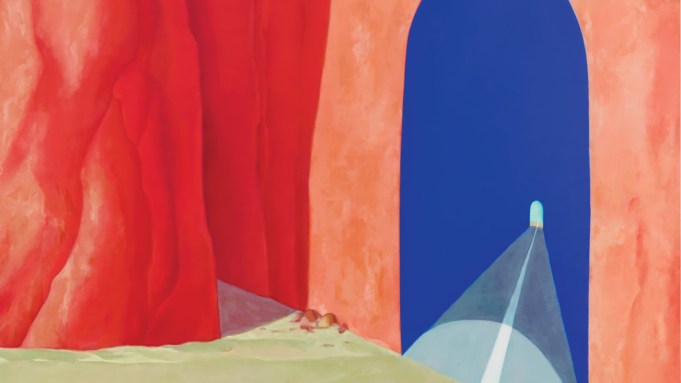 Visitors to “High Noon” at Gagosian Beverly Hills might have felt as if they had stepped into a cartoon. Dan Colen’s latest series comprises large-scale horizontal canvases (around seven to ten feet across) painted with desert landscapes drawn from animator Chuck Jones’s Road Runner and Wile E. Coyote shorts. Burnt orange cliffs and ocher boulders undergird a canary-colored sky in The Revenge (2016–18), while the golden outline of some rock pushes through a sketchy, barely there arroyo in The Ballad (2016–18). Although Colen—putting a spin on the painting-as-window idea—turns his canvases into TV or movie screens, he gives us scenes portrayed in a haze of painterly strokes. Close up, the landscapes disintegrate into nonfigurative romps through a palette suggesting sunset colors somehow washed out by a midday sun.

But where are the Road Runner and the Coyote? The work sometimes has a kind of movement to it: for instance, A Reason to Live and A Reason to Die, both 2018, frame the same rocky crevice from slightly different vantage points, evoking separate moments in an animated sequence. Colen, however, has extracted the characters from Jones’s scenes, and there is not so much as a dust cloud to suggest that they had ever been there. The Reward and The Trap (both 2016–18) depict the tunnel that the Coyote paints on a cliff in the debut short, “Fast and Furry-ous” (1949), as a means of nabbing his speedy nemesis. Magically, the Road Runner zooms right through the tromp l’oeil tunnel. Attempting to follow suit, the Coyote painfully fails. But Colen’s abstraction evacuates the comical Darwinism that animates Jones’s iconic desert. Whatever presence the viewer feels when standing among the landscapes is offset by this marked absence—a desertedness, indeed. Colen has made cartoons out of a cartoon desert, and the initial joy of being somewhere soon fades into the existential boredom of being nowhere. An actual desert isn’t really empty, but this mythical one is.

It’s worth stating that Jones himself was creating a mythical space, a Mojave of the mind, rather than aiming for documentary fidelity. His alien settings are already tragic and impossible. Colen’s paintings are redundant in this regard. They are also not the first contemporary artworks to erase the characters from these settings: Mungo Thomson’s 2002 video American Desert (for Chuck Jones) did the same. Thomson’s piece is deeply atmospheric and positively elegiac, as if he is portraying the sites of important monuments that had vanished. The overriding tone of Colen’s paintings, though, is less a whispering wind, more the whoosh and thud of a stage flat falling over. The emptiness of emptiness seems to be both the origin and the destination of the work. It’s almost as if the artist is afraid to take us anywhere, as if anything resembling nostalgia or even sincere curiosity would be, in 2018, deeply uncool. Instead, Colen would make Wile E. Coyotes of us. He has painted luscious magic-hour landscapes run through with an illusion of depth. But there is no depth. Not to the canvases, and not to his concept, either. Pretend otherwise and you will run into a wall.