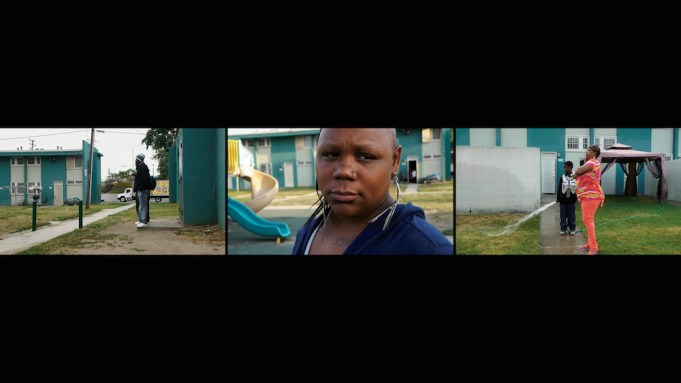 Although Dutch photographer Dana Lixenberg has had an extensive career photographing entertainment icons for magazines, another side of her practice has taken place far from the limelight. In 2005, for instance, she created a series of photographs of the homeless population of Jeffersonville, Indiana; a few years later, she photographed an Innupiaq community in Alaska whose existence has been threatened by global warming. “Imperial Courts, 1993–2015,” which Lixenberg began in the aftermath of the 1992 Rodney King riots, centers on the inhabitants of a housing project in Watts, Los Angeles. The body of work includes 393 photographs (which were recently awarded the Deutsche Börse Photography Prize), audio recordings, a web documentary, and a roughly hour-long three-channel video installation. Like her previous works, “Imperial Courts” provokes reflection on a question posed by Stanley Wolukau-Wanambwa in a recent essay about Lixenberg and others who document lives unfamiliar to their own: “What are the virtues of a photographer’s position on the outside of a world looking in?”

It is a question that Lixenberg herself appears to pose repeatedly throughout the video, Imperial Courts (2015)—the centerpiece of her exhibition at GRIMM, which also included a tiny sampling of the black-and-white prints. The video, shot in color, was filmed in the courtyard of the housing project. For the opening sequence, the center screen shows a series of tables set up outside a segment of the two-story cinderblock complex; the right features a group of girls in prom dresses waiting for friends to exit one of the building’s iron-barred doors; and the left bears a close-up of several goldfish in a fishbowl on one of the tables. An uncomfortable analogy presents itself here between the fish in the glass bowl and the filmed inhabitants of Imperial Courts, whose lives are presented as almost totally circumscribed by the housing project’s boundaries.

But Lixenberg, a white European who spent two decades getting to know the predominantly African American community, seems cognizant of the anthropological pitfalls of her undertaking. Forestalling false notions about the knowability of her subject matter, she generally inhabits a spatial and psychological middle distance from those she’s filming. Throughout much of the video, people go about their business, seemingly indifferent to the camera, though their occasional eye contact with us shows that they are often well aware of its presence. We see men smoking together or playing dice. One woman braids another’s hair as a friend looks on. A boy bounces a basketball along the courtyard path. Families enjoy a Fourth of July barbecue in front of their apartments. Though we catch snippets of conversation, often we hear little more than the sound of the freeway that borders the property. Not once in the course of the video does the camera enter anyone’s home.

A sense of intimacy is established, instead, through a series of portrait vignettes, in which individual subjects are filmed at close range, speaking to the camera, or reciting something they’ve written. What we hear in these instances are stories of hardship and perseverance. “At only twenty-two, I done seen it all, I done done it all, been through the worst news,” raps a young woman. One man, after explaining that the scars on his face are from a car accident that left him initially pronounced dead, sings a joyful anthem titled “Still Breathing.” Another recites a poem he wrote while incarcerated. “Pain is transparent but it’s never unseen,” he remarks at one point. The line would make a fitting epigraph for the video, in which traces of pain are apparent not only on the faces we see but in the small memorials of candles and plastic flowers and bandanas on which the camera lingers at times.

Still, one is reminded of how much about the lives before us remains inaccessible. The video closes with a wide shot of a group of boys, their backs to the camera, their words indecipherable. The last sound we hear is the sudden slam of one of the housing project’s doors, behind which lie worlds unseen.

The Wiesmann Project Thunderball in Photos

How to Get a ‘Just Transition’ in Fashion, Per Remake

Mexico vs. Saudi Arabia Live Stream: How to Watch the World Cup Game Online for Free