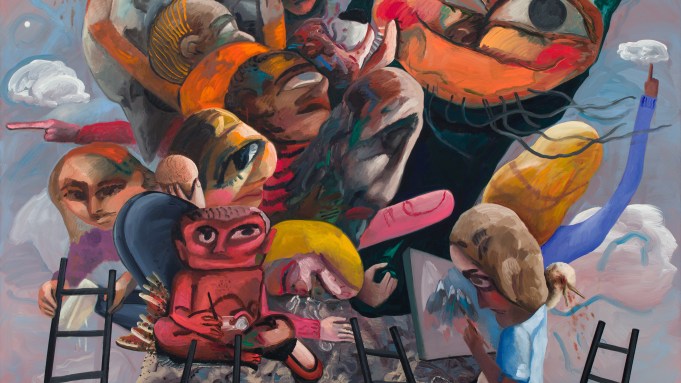 At the opening of Dana Schutz’s first major exhibition in New York since her disastrous outing at the 2017 Whitney Biennial, her admirers breathed a collective sigh of relief: the gallery’s walls were mercifully free of anything that might be deemed politically incorrect, culturally appropriative, or racially insulting. She’d learned her lesson, wisely returning in the new paintings to the pure products of her boundless, twisted imagination—there were no historical memories insulted here. The verdict was in: Open Casket (2016), her luridly aestheticized, widely denounced rendering of the iconic image of Emmett Till’s beaten and bloodied corpse, had been an unfortunate but isolated misstep in an otherwise remarkable career. The early reception of the show was almost uniformly triumphal and hyperbolic: “In her new work . . . Dana Schutz takes back her painterly name,” Jerry Saltz proclaimed in New York magazine. She could once again be unproblematically celebrated, without sheepishness or qualification.

The twelve paintings on view were, indeed, spectacular demonstrations of Schutz’s virtuosic painterly gifts. Many of them seemed to reflect obliquely on the embarrassment of public scrutiny: the malformed figure in Presenter (2018) stands at a podium with her underwear around her ankles, a giant tentacled hand reaching out to claw at her face. In Mountain Group (2018), a woman kneels precariously on the side of a mountaintop painting an idyllic alpine landscape, barely aware of the horde of gesticulating monsters looming just above her. Treadmill (2018) shows a fish-human hybrid running frantically on the titular exercise machine, on the verge of losing its bearings.

A suite of small bronzes—the artist’s first public foray into sculpture—that depicted mangled, contorted bodies was far less successful. Though the sculptures allowed Schutz to push the fascination with abject form evident in her paintings to an extreme, the change in medium stripped away what makes her canvases interesting: no weird, acid-trip color; no dissonant tension between the clarity of her compositional architecture and the primordial mess that populates it. The massive canvas Visible World (2018), for instance, portrays a reclining nude moored on a rock in a murky, detritus-strewn sea, a familiar subject made thrillingly strange in the juxtaposition between the figure’s incongruous anatomy—a slab of flesh with arms akimbo, its contours sketched in ungainly strokes of brown and green—and the delicately modeled pelican that rests on her thigh, a glistening, Bosch-y berry held in its beak.

Why, then, did I find myself grimacing at the works, even as I marveled at their execution? I suspect it’s because I saw in each of them grotesque traces of the painterly whorl that Schutz made of Till’s brutalized face. Her work’s body horror had never bothered me before: the deformed and flayed figures on display—such as “Frank,” the fictional last-man-on-earth she depicted in her first major series, in the early 2000s—were theoretical, and thus so was the violence done to them. But Schutz’s paintings seem less funny to me now, more viscerally gross and cruel, their cartoonishness unseemly and flippant. Our civilizational horror show continually produces enough mutilated, mistreated bodies on its own. Why make more, let alone offer them up for aesthetic delectation?

Even as I write it, this criticism feels unfair. Shouldn’t Schutz be free to follow her painterly vision wherever it takes her, even if it’s to a place of base ugliness? Isn’t it absurd to suggest that a painter must extend the same ethical courtesy to the bodies she invents as those she might encounter in real life? In other words: why demand that a painter develop a coherent politics? These works are, of course, imaginary; they make no pretense of speaking for or about anyone but Schutz and the demented universe she concocts on the canvas. But you can’t un-ring a bell: Open Casket commingled that world with our own and, fair or not, I’m no longer able to pull them apart.