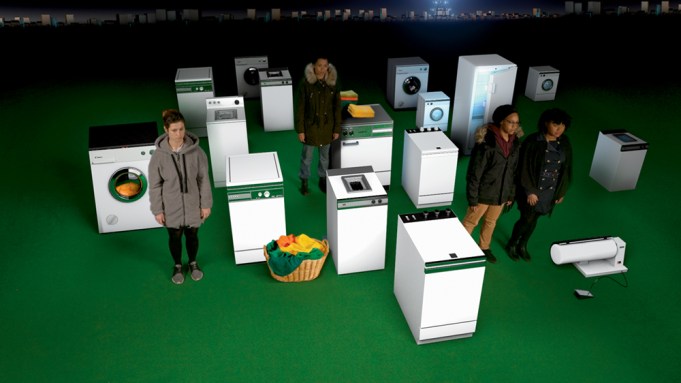 Danielle Dean’s exhibition “Bazar” took the catalogues the iconic French department store Bazar de l’Hôtel de Ville has produced between the late nineteenth century and today as a lens through which to view the entangled histories of consumerism and racism. For the work on view, Dean collaborated with four women affiliated with Permis de Vivre la Ville (License to Live in the City)—an association that aims to integrate underserved suburban youth into creative fields in Paris—most of them second-generation immigrants from French colonies. Dean and her collaborators scoured the catalogues’ pages, researching ways in which they perpetuated racist stereotypes and reinforced French power.

The Bazar catalogues helped define the ideal Belle Époque consumer: a white, upper-class Parisian woman given to wearing extravagant hats, furs, dresses, and shoes. People of color—populations on whose backs the country’s prosperity was built—are hardly ever represented in Bazar’s grand narrative. When they are, they take cartoonish form, as in an ad that depicts a cheerful black maid, her dark skin making the laundry she’s holding look whiter—the only representation the group could find of a black woman. This figure appears in certain scenes in the video Bazar (2018), the exhibition’s central work, for which the catalogues’ exclusionary and exploitative tactics serve as a kind of backdrop. The video was here shown as a four-channel installation.

Bazar tracks four women (played by the Permis de Vivre la Ville members) as they walk through the department store, a city park, and other places, describing their relationships to the objects around them. Many of the items were lifted directly from old Bazar catalogues. The bottle rack made famous by Marcel Duchamp, who purchased it from the store before transforming it magically into one of his first readymades, supplants the Eiffel Tower in a scene in which the women occupy a field of washing machines. The glowing metal instrument is seen looming like a religious beacon as one of the women asks, in French, “Aren’t we here to discover the dream, the infinite, progress, a journey?”

In the world of Bazar, such discovery apparently takes place by way of shopping—or at least the characters hope it can. Half the video is set in the store. The women amble about the lighting section. Perhaps the character who claims she is looking for love can find herself a lamp. They peruse a coffee-machine area, where we glimpse a fire-truck-red Krups model that is echoed by a larger-than-life, digitally rendered version that appears in other sequences, in which a woman rhapsodizes about an “amazing Arts counter” where “real value demands sunny days full of whimsy and colors” and later krumps beside the gigantic machine. Some of the video’s dialogue was taken from Bazar catalogue copy, while other segments were partly improvised, such as a black woman’s account of her childhood desire for a blonde Barbie.

Cutouts depicting objects and landscapes shown in Bazar stood on the floor around the video screens, and watercolors portraying pages from the catalogues hung on the walls. Characters from the video were inserted into both, bringing everything together into a hermetic whole. Of course, the conceit that capitalism is an all-consuming, subject-constructing disease of sorts has been rehashed to death. More interesting is Dean’s probing of the exploitative labor practices of Western countries with regard to their overseas plunders. Marx spoke often of the alienated worker, but not where the worker was, exactly. In the video, an assortment of commodities (a Dutch oven, an alarm clock, two candlesticks) parades across maps showing current and historical French territories, such as Guadeloupe and Algeria, the sequences reminding us that colonial powers take over not only land but also work forces, using foreign peoples to produce materials and objects for domestic benefit. Globalization isn’t a recent phenomenon; Bazar stresses that it’s been happening for quite some time.

What the Hell Happened to Justin Timberlake?