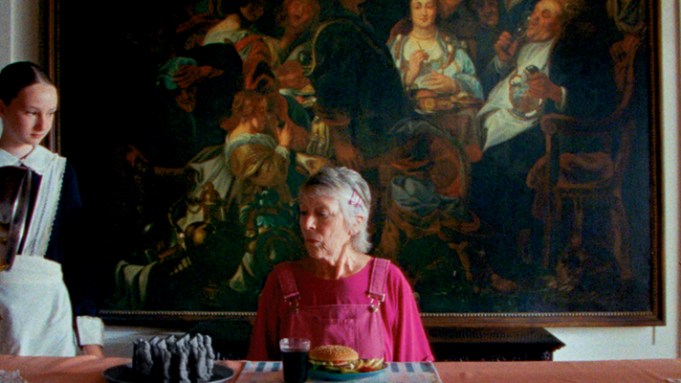 For this exhibition, London-based artist and filmmaker Daria Martin took as a starting point the dream diaries kept by her Jewish grandmother Susi Stiassni, whose family fled Brno, Czechoslovakia, in 1938, when Stiassni was sixteen, in response to the looming threat of Nazi occupation. They eventually settled in California. Stiassni began recording her dreams in the early 1970s, when she entered Jungian psychoanalysis, and continued to do so until the year she died, 2005. Held in the Barbican’s Curve gallery, Martin’s show is bookended by two videos (both 2019): Refuge, which shows a playthrough of a video game set in Stiassni’s modernist childhood home; and Tonight the World, composed of five sequences enacting dreams transcribed in the diaries.

Since the early 2000s, Martin has made a number of films exploring subjects related to memory, states of consciousness, and the transmission of trauma across generations. In the videos featured here, she channels the displacement and loss experienced by her family through her grandmother’s dreams. While the Holocaust is not explicitly referenced, it forms the backdrop to the work on view. The Brno home—to which Stiassni never returned—was seized by the Nazis in 1938, and the theme of invasion pervades the increasingly tense sequences in Tonight the World.

Throughout the sparse exhibition, Martin restricts the information she grants the viewer, which is both the show’s strength and its weakness. Of Stiassni’s twenty thousand dream-diary pages, the viewer is allowed to read just five, and they are displayed near the exit; another 275 typewritten sheets are positioned in a recessed space behind an extended wall, visible through a window but placed too far away to read. Besides the dream-diary pages and the videos, the only other displays are a family photo set within a niche in one wall and a small sculpture of a toy robot placed on a high shelf. (Robots are one of several motifs from the diaries that recur through the videos.) The gallery walls are left largely bare and much of the space remains unused.

A sense of restraint similarly informs Refuge, for which Martin collaborated with video game designers in Brno, today a major gaming hub. The video shows the game’s first-person player moving through the rooms of Stiassni’s virtual house, which is rendered in gray scale and devoid of occupants. Though Refuge marks a departure from the poetic, sensory films for which Martin is best known, the video game format’s lack of affect befits the artist’s cold exploration of her grandmother’s former home, which is now a state museum, and emphasizes the impossibility of accessing another person’s memories. Stiassni never discussed her past with her family; here, Martin seems to relay her own sense of empathic dislocation.

Tonight the World, which was transferred to video from anamorphic 16mm film, has an altogether different register than Refuge. Its disquieting dream fragments center on Stiassni, who is played by four women. In one sequence, an innocent game of hide-and-seek turns ominous as a sinkhole threatens to suck down a child; in another, Stiassni’s faltering singing ends a terrifying standoff with an armed child soldier in a dark forest. The video abounds with surreal elements: adult actors play children; Stiassni is served a dish filled with toy warriors; she kicks through a wall in her home to find an elderly man living in a cavity behind it.

These snippets are intriguing, yet it feels as if the artist has not maximized the potential of the rich material at her disposal. Stiassni was a painter—indeed she inspired Martin’s own decision to become an artist—and her dream diary might be regarded as an artwork in itself. Though Martin’s desire to protect her grandmother’s privacy is understandable, it also thwarts any real appreciation of the person behind these reveries. One leaves the exhibition with the sense of an opportunity missed.