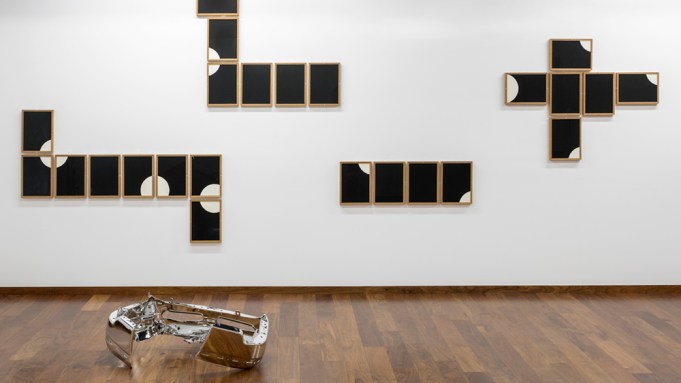 Guatemalan artist Dario Escobar examines the effects of consumer capitalism from a Central American perspective in sculptures and installations that repurpose sports equipment, car parts, and other commodities. In the early 2000s, he created a series of untitled sculptures composed of skateboards, basketball hoops, and baseball bats covered in silver bearing repoussé motifs derived from Spanish colonial art. A later series, “Obverse & Reverse” (2009–), comprises installations of soccer balls that have been disassembled, reconstructed inside-out, and hung from the ceiling in cloudlike configurations.

Escobar’s exhibition at Proyectos Monclova took up the idea that one man’s trash is another man’s treasure as a means of expressing the intertwined but unequal relationship between the consumer economies of Guatemala and the United States. The floor of the gallery was littered with new sculptures from his series “Crash” (2010–): car bumpers that have been twisted and mangled in accidents and coated by the artist in chrome, their shiny surfaces contrasting with their damaged forms. The bumpers come from vehicles salvaged in the United States and imported into Guatemala. Because there are no domestic car manufacturers in Guatemala, discarded vehicles are frequently towed south through the Gulf of Mexico and refurbished for reuse once they reach Guatemala City.

Hanging on the walls were a handful of Escobar’s “Circular Compositions” (2019), in which configurations of framed works on paper display geometric compositions of black fields and white circles and semicircles. In the show, the circles loosely suggested eyes watching the viewer observe the bumpers. Like the bumpers, the works on paper incorporate material from the battered cars Guatemala imports. To create them, Escobar sneaked into parking garages around Guatemala City and placed sheets of paper underneath cars to collect the engine oil that leaks out, which he distributed across the sheets with a brush. The circular forms are portions of exposed paper that Escobar treated with a substance that repelled the oil. But the effect is only temporary: the oil will eventually seep into these areas, destroying the compositions’ hard-edge quality.

In a recent interview with the Mexican newspaper La Razón, Escobar said that while cars are often seen as a symbol of development and progress, they better represent issues of pollution and overconsumption. Escobar’s project critiques Americans who dump still-usable vehicles in order to upgrade to newer, shinier models and who remain ignorant of the afterlives of discarded goods. The cars’ recycling, however, is also detrimental to the environment, as the aging, hastily repaired vehicles lag behind current emissions standards, producing pollution for which the developing world is blamed. This reality lay beneath the pristine surface of the exhibition, which at first appeared to be an aesthetically pleasing display of glossy metal sculptures and monochromatic prints, but gradually revealed itself to be a commentary on the injustice of Central America’s absorption of first-world waste.