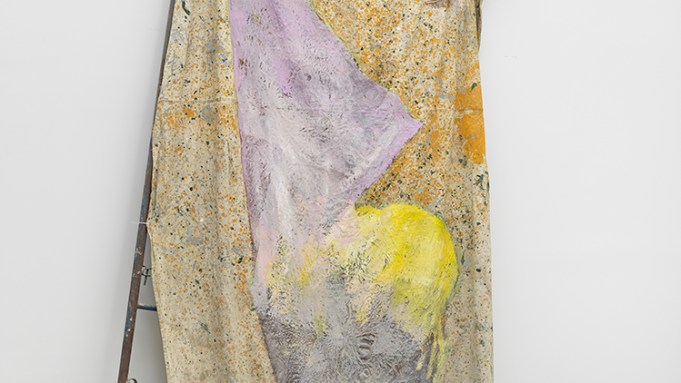 Whenever a new David Hammons exhibition opens, it tends to be received less as a display of artworks than as an event. Hammons has consistently refused gallery representation, so it’s always a mystery when and where the next show will pop up, though invariably it will be somewhere extremely blue-chip. He is the rare artist with the clout to dictate to galleries the terms of his participation, the rumored details of which circulate internationally in gossipy whispers: The gallery has no say in what will be included. The artist drops by unannounced and swaps out works. He insists that nothing in the show will be for sale—or is it that the gallery must buy everything up front? He keeps the art world on its toes, largely by making clear how little he cares for its decorum.

Hammons’s show at Hauser & Wirth’s sprawling outpost in downtown Los Angeles was characteristically opaque in its organizational logic. There was no checklist or catalogue, nor any wall labels identifying the works, only a press release composed of scribbled lines and a dedication to jazz legend Ornette Coleman. In the galleries, paintings and sculptures, mostly dating from the last fifteen or so years, were scattered among photographs of older works, archival ephemera, and any number of barbed readymades: a large cactus wrapped in plastic, for instance, or a floor lamp whose shade had been replaced by a Sotheby’s shopping bag so that the Flavin neon printed on its front was illuminated. Elsewhere, a blown-up fax from a collector declining the opportunity to purchase one of the snowballs from Hammons’s absurdist February 1983 performance Bliz-aard Ball Sale, for which he set up shop as a street vendor hawking the ephemeral items, accompanied a bowl of water grandly posed on a plinth with a little bronze plaque.

These seemingly slapdash pieces served as the perfect foil for Hammons’s commanding “Tarp Paintings” (2007–), of which there were perhaps a dozen spread throughout the exhibition. In these works, lush, gestural abstractions—the sort of thing a collector might love to hang over a couch—are shrouded by tarps, moving blankets, dirty swaths of fabric, and plastic wrap, materials Hammons often finds on the street. Taking up the language of Ab Ex as a readymade in itself, he proceeds to mock it—and the canon it represents—through the impious juxtaposition of painting and trash.

On the one hand, these works are conceptual gambits, telegraphing Hammons’s antagonism toward his art world audiences: he alerts gallerygoers to the presence of a beautiful object only to withhold it from view. And yet, as paintings, they are far less deskilled than they seem at first glance: Hammons’s actual paint handling may be deliberately imitative and unremarkable, but the overall compositions have a deceptive complexity, as the artist harnesses debased materials to create analogues of elegant painterly effects. The loose threads dangling down from a frayed length of fabric in one painting register as thin drips of pigment, while a veil of black gauze in another functions as something like sfumato, giving the underlying composition an atmospheric haziness that reads as landscape, even if the exposed edge of the canvas evokes Color Field.

The difficulty of Hammons’s work is that it seems to preempt any possible critical response and offer up an implicit rebuttal. This was most evident in the centerpiece of the show, a grid of tents pitched in the gallery’s interior courtyard, which is located between the entrance to the gallery’s chic, industrial compound and the exhibition spaces. Each tent bore a stenciled threat: this could be u. My first reaction was dismissive; the installation seemed too obvious, too lazily reliant on a contextual friction that was intended to point to a larger one, since the gallery—a sign of advanced gentrification if ever there was one—sits just a few blocks from the homeless encampments of Skid Row. OK, we’re all complicit: now what?

But the installation posed a problem for would-be visitors: to walk right by the piece en route to the exhibition would reproduce a kind of everyday callousness; to solemnly admire it would be perverse and self-congratulatory; and to feel offended by its hypocrisy or aestheticization of a social crisis would be equally so: imagine being preoccupied by the dubious politics of an artwork about homelessness when there’s a real tent city down the street—care about that instead. Hammons was, as ever, five steps ahead.