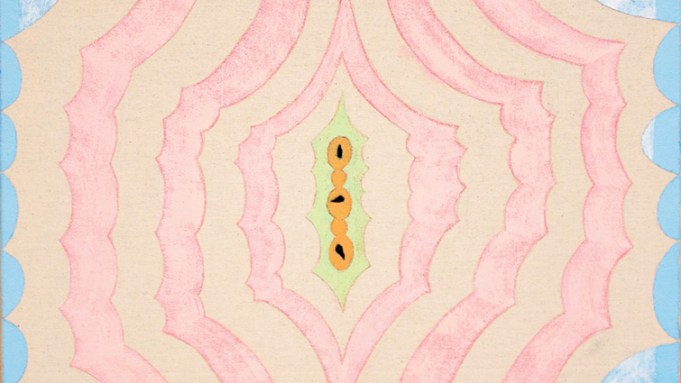 The first thing you noticed upon entering painter David Onri Anderson’s exhibition at Elephant Gallery, “Earthbound,” was the smell of rich, moist soil. The second was the sod that carpeted the space. At the opening, visitors were encouraged to take off their shoes so they could feel the grass between their toes. Children climbed up small artificial hills. Billed as a painting show, the exhibition offered an unexpectedly multisensory experience.

Some of the thirty-six paintings on view (all 2018) were subtle compositions depicting ordinary objects, such as apple cores, burning candles, and flowers. Others displayed Op art patterns with organic-seeming imperfections. The installation of soil and grass gave a playful atmosphere to the show, which was meant to explore ideas like the artist’s wish “to be a probiotic germ and not a parasite, to see the earth’s radiating energy in every life form,” a proclamation that he wrote on one of the gallery walls in magic marker. The walls were airbrushed with a gradient pattern that shifted from white to blue to black. The sections were meant to correspond to times of the day, and the paintings that hung on them matched thematically: the white section represented dawn and sported a painting called Morning Flower, while the black, nighttime area served as the backdrop for paintings of lit candles.

Five apple core paintings displayed on the blue portion were some of the most successful works in the show. Growing Apple Core includes all the elements of an ordinary red apple, but has a sort of hallucinatory quality. Anderson constructed the composition by tracing the core’s scalloped edges at increasing dimensions so that this central shape, which evokes a vaginal opening and contains a series of egglike forms bearing seeds that suggest sperm, is echoed concentrically. Anderson sketches on his canvases in pencil and makes no attempt to hide the marks and notes with paint. The resulting works are charmingly imperfect, with words like “flexible” and “vulnerable” faintly discernible beneath the paint. Anderson sometimes uses methods common in outsider art, such as painting on found materials like burlap and bark.

The Nashville-based artist has French-Algerian roots, and draws inspiration from trips to his family’s home in Bordeaux. But he is equally fascinated by the American desert, and his color schemes and earthy spiritualism recall those of Arthur Dove or Georgia O’Keeffe. His studio practice is spontaneous. He doesn’t plan his palette in advance, blending colors as he goes. He thinks of painting as a process of seeking out esoteric truths about the relationship between the physical and the spiritual. At twenty-six, he has an earnest, idealistic outlook on art.

“Earthbound” was perhaps best understood as a collaborative effort with Elephant, which is run by Alex Lockwood and Ellie Caudill, both of whom are artists themselves. They worked with him to develop the concept for the installation, including the grass and the gradient mural. Those elements enhanced the paintings, which were strong on their own but gained an edge in the immersive environment. The sights, smells, and textures of the weeds and wildflowers planted in tufts along the walls reinforced the sense that Anderson’s work is deeply rooted in an authentic experience of the natural world.

Forget Vinyl, McIntosh Debuts Its Most Ambitious CD Player Yet