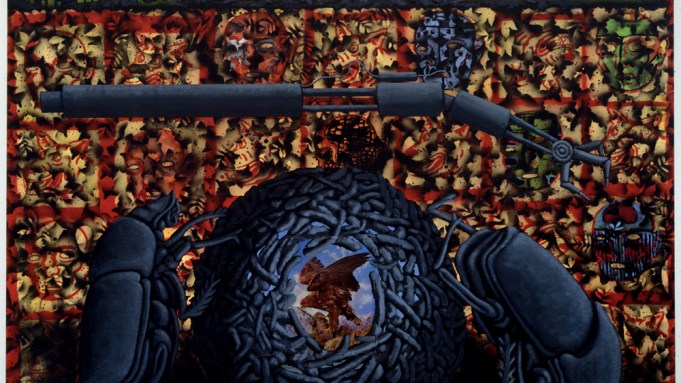 A certain level of cognitive dissonance is required to enjoy the Whitney Museum’s long-awaited retrospective of the restless oeuvre of downtown writer, artist, and iconoclast David Wojnarowicz (1954–1992). Wojnarowicz, who died of AIDS-related complications at thirty-seven and, as the exhibition reminds us, “saw the outsider as his true subject,” was an exacting and unabashed critic of institutions, including museums such as the Whitney. Of the conservative campaign against the National Endowment of the Arts’ funding of “indecent” art in 1989—and the liberal outcry in response—he wrote, bemused: “The major museums in New York . . . are just as guilty of this kind of selective cultural support and denial.”

In one sense, Wojnarowicz’s recent canonization—which might have begun with a death rattle of the old culture wars when, in 2010, the Catholic League pressured the Smithsonian Institution to pull his video A Fire in My Belly from an exhibition there, and could be said to culminate with this retrospective that includes the work—is both an artistic and a social good. In the essay quoted above, “Postcards from America: X-Rays from Hell,” Wojnarowicz goes on to acknowledge the power of representation in art: “the more diverse the representations, the more I feel there is room in the environment for my existence.” But he wrote that essay nearly thirty years ago—for the catalogue of “Witnesses: Against Our Vanishing,” a 1989 exhibition at Artists Space organized by Nan Goldin of work by artists responding to the AIDS crisis. Today, with the institutional recognition that his retrospective signals, a question emerges about the cost of his inclusion: what does it mean for the outsider to be invited in, and what, perhaps, gets left behind?

First announced for the Whitney’s 2016 season and delayed until this summer, “David Wojnarowicz: History Keeps Me Awake at Night” gathers works spanning fourteen years of a short but prolific career, and crafts a compelling narrative of the artistic and political development of an exceptional and yet quintessentially American figure. The exhibition begins with the spectral, black-and-white landscape of his “Arthur Rimbaud in New York” photographs (1979–80), in which “Rimbaud” (played by friends of the artist wearing a paper mask) is shown cruising a city that’s virtually unrecognizable today, the figure serving as a kind of psychopomp to the past. In the next gallery, the walls of which have been painted black, Wojnarowicz’s early experiments in form and material—stenciled works, spray-painted trash-can lids, embellished supermarket posters—are installed salon-style and songs by his No Wave band play from speakers overhead. Here, one can see the autodidact begin to build the visual vocabulary he would continue to play with (and, to some extent, refine) throughout his career: maps, bull’s-eyes, animals, skulls, men as lovers, men as soldiers. The low light, lack of labels, and minimal wall text in this gallery might be meant to suggest the abandoned shipping terminal at Pier 34—just a mile south of the Whitney’s current location—where Wojnarowicz, along with Mike Bidlo and other East Village artists, used to make and show work, an effect reinforced by a slideshow of Andreas Sterzing’s photographs documenting the community there circa 1983–84.

The middle of the exhibition is dedicated to Wojnarowicz’s large-scale paintings. Such works are perhaps the least-remembered of his far-ranging creative output, and the show’s curators, David Kiehl and David Breslin, make a convincing argument that this should not be the case. They present Wojnarowicz’s paintings in the context of his relationship with Peter Hujar, displaying his fantastic, Technicolor variations on a reclining Hujar’s head across from Hujar’s photographic portraits of his onetime lover and mentee, and noting that it was the photographer who encouraged Wojnarowicz to pursue painting. Nearby are vividly colored industrial landscapes and fragmented, dreamlike scenes, in which Wojnarowicz extended his earlier street sensibility more deeply into the symbolic, producing images that sometimes recall those by Frida Kahlo (a comparison Lucy Lippard drew in this magazine in 1991). But these ambitious works sacrifice neither grit—there’s still plenty of spray paint to be found—nor humor. The title of the collaged painting I Use Maps Because I Don’t Know How to Paint (1984) pokes fun at the work’s own composition: the blue figure at the center wears a T-shirt made from a map, while the face grimacing over his shoulder has a map for skin (and lips portrayed as stitched shut with red string, yet another of Wojnarowicz’s motifs). In Dung Beetles II: Camouflage Leads Us Into Destruction (1986), a painted depiction of a ball of dung contains a lenticular image of an eagle alighting on a rock, evoking both Aesop’s fable about the danger of hubris and the folly of American imperialism.

The final galleries feature some of Wojnarowicz’s best works, including photographs he shot after returning to the medium in the late 1980s; pieces that marry his two favored creative modes, text and image; and his most legibly activist prints. These works don’t get quite as much room as the large paintings, however, and the installation can feel crowded. The show’s most moving juxtaposition, for instance, deserves more space: three black-and-white photographs of Hujar in a hospital bed moments after his death, in 1987, hang alongside Untitled (Hujar Dead), 1988–89, in which the same photos provide the backdrop for an incendiary text condemning politicians’ cruel disregard for people with AIDS “in this killing machine called America.”

Wojnarowicz’s photographs of Hujar’s body and Untitled (Hujar Dead) were first shown in the aforementioned Artists Space exhibition. His catalogue essay so angered the chairman of the NEA that the agency pulled funding for the show, and the grant was later restored only partially, excluding funds for the catalogue. Wojnarowicz was furious that Artists Space accepted these terms, and, in protest, he refused to attend the opening. A year later, at the opening of his only solo museum exhibition during his lifetime, at the University Galleries of Illinois State University, he gave a famously confrontational performance, shouting “If I tell you I’m a homosexual and a queer, does it make you nervous?” to an audience of seven hundred.

That was 1990, and the risky performance was a hit. It’s hard to imagine what Wojnarowicz could say to shock and awe a crowd at the Whitney in 2018, but as one listens to the recordings of his readings that play in a gallery dividing his midcareer paintings from his later work—his voice sure and full of rage—it’s even harder to imagine that he would not have found a way to direct our attention to any number of contemporary injustices the curators have not taken up here, whether the ongoing HIV/AIDS crisis in this country, the complicity of museums and galleries in the displacement of working-class people, or how both of these disproportionately affect people of color. Fittingly, it’s members of ACT UP (of which Wojnarowicz was himself a part) who have assumed this work, having recently staged a protest at the Whitney calling on the museum to recognize both the legacy of Wojnarowicz’s activism and the fact that the AIDS epidemic is not over. By framing the artist’s activist spirit as historical, this otherwise impressive exhibition betrays that spirit, leaving us not just to marvel at all Wojnarowicz made, but also to wonder what critiques he would have to make, what interventions.