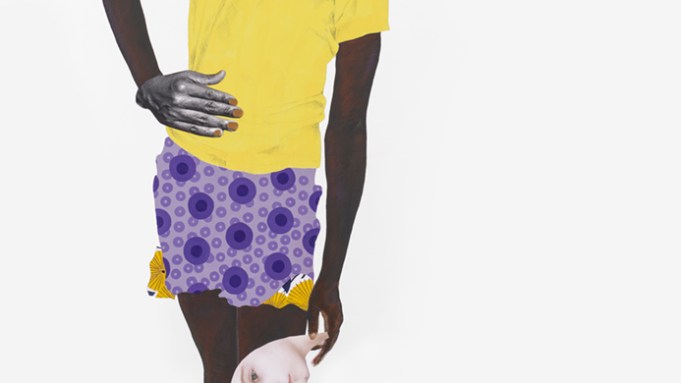 Austin-based artist Deborah Roberts has spent much of her career on the art world’s margins, painting sentimental scenes of African American life whose aesthetic she has described, wryly, as “black Norman Rockwell.” Her approach shifted dramatically around 2011, when, in her late forties, she entered an MFA program and began to experiment with collage. In the years since, her work has focused almost exclusively on depictions of black youth: bold, graphic figures composed of gouache bodies pasted with faces and hands cut from photographs found in magazines or online, the unsettling combinations evoking the precariousness of black childhood in the United States. “If They Come,” Roberts’s show at Stephen Friedman, featured nineteen of these composite portraits alongside a grid of sixty small, more disjointed photomontages (Future Tense, 2018) in which snippets of limbs and facial features are assembled into surreal configurations.

In an exhibition at Vielmetter Los Angeles last spring, “Native Sons: Many Thousands Gone,” Roberts highlighted the systemic violence inflicted on black boys, presenting works that incorporated references to cases like the 1944 execution of fourteen-year-old George Stinney Jr., who was wrongfully convicted of murder in South Carolina, and the killing of twelve-year-old Tamir Rice by Cleveland police in 2014. The works in “If They Come,” by contrast, were often affirmative in tone, at times even celebratory, the artist proposing a counterpoint to mass cultural representations of black youth that emphasize abjection and criminalization.

Roberts’s prepubescent figures appear against stark white backgrounds that accentuate the dynamic gestures and expressions made by their disproportionately large collaged hands and faces. Hip Bone (2019) portrays a girl with one hand jauntily resting on her hip, and the other in boxers’ wraps and clenched in an oversize fist. Two photographs make up her face: a smiling, playful expression in front is countered by a serious, questioning one behind. What makes the work so arresting is its simultaneous evocation of seemingly contradictory states: childish exuberance and diffidence, vulnerability and empowerment.

A number of other works also refer to boxing: in Man(ly), 2019, a small boy with wrapped fists flexes his undeveloped biceps, his Pokémon socks comically undermining his tough pose. Red, White, and Blue (2018) depicts two girls, one of whom wears a hijab, standing back-to-back. Each holds a boxing glove, intimating a sisterly solidarity. If these postures suggest resilience and strength, they are also defensive, hinting at the inequities faced by black children in a society designed around the interests of white supremacy. One particularly pointed work, The Burden (2019), depicts an anxious-looking girl whose body is weighed down on one side by the glossy white mask she holds in her hand, an allusion to societal pressure on black girls to conform to standards of beauty that privilege whiteness.

Many of the faces and hands in the works were appropriated from images of adults, some of them belonging to famous figures like Muhammad Ali, Sydney Poitier, and James Baldwin. The overlaying of adult features on children’s bodies offers a sober reminder that white people often perceive black adolescents as threatening adults rather than innocent children, sometimes with tragic results. However, invoking the black luminaries also serves a positive function: to present a historical community of role models or guiding spirits.

The most obvious antecedent to the works is Romare Bearden’s groundbreaking collages, which represented the richness of midcentury African American culture by means of vibrant, fractured composites of photographic images. Roberts borrows from Bearden’s vocabulary but distills it into her own powerful language, capturing her subjects in a fragile state of becoming.