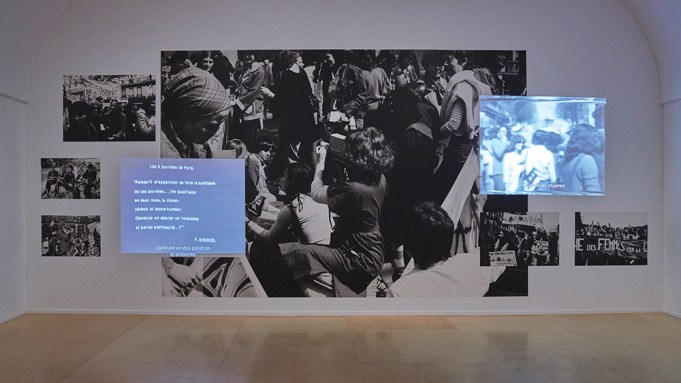 Delphine Seyrig (1932–1990) is an icon of 1960s avant-garde cinema. The Lebanese-born French actress starred in films by Alain Resnais, Marguerite Duras, Luis Buñuel, and Chantal Akerman, among others. The first gallery of the exhibition “Defiant Muses: Delphine Seyrig and the Feminist Video Collectives in France in the 1970s and 1980s” documented this background, displaying a collection of film posters, costumes, and production stills from her career. Projected on the far wall was a clip of Resnais’s archly boring masterpiece Last Year at Marienbad (1961), in which Seyrig played the female lead. The rest of the sprawling exhibition, however, focused on Seyrig’s lesser-known work as a feminist filmmaker. In doing so, it explored a little-known history: that of radical feminists in France in the 1970s and ’80s using the newly invented video camera to make outsider films on a range of subjects, from sexism in the media to national liberation struggles.

Swept up in the political unrest of 1968, Seyrig, then in the middle of her acting career, threw herself into feminism. She signed the 1971 Manifesto of the 343, a list of women who had procured an abortion (illegal in France until 1975), and spoke publicly in support of women’s rights. In 1975 she attended filmmaker Carole Roussopoulos’s workshop for women artists on how to make videos with the new Sony Portapak. The two women became friends; and with the translator Ioana Wieder, they formed a filmmaking collective named Les Insoumuses—a portmanteau of the French words for “defiant” and “muses.”

Like similar filmmaking collectives in the United States, such as Videofreex and TVTV, Les Insoumuses used video to excoriate the moving image industry and society at large. They produced rough, DIY-style films characteristic of the rudimentary technology they employed. Some works focus on a single person speaking or reading a text, the camera slowly zooming in and out on the subject. Others détourn footage from TV programs, reframing it with handwritten title cards and voice-overs that poke fun at the sexist content. Working in video allowed the women to create powerful moving images without the infrastructure of a television studio or production company, realms long dominated by men. A quote of Seyrig emblazoned on one gallery wall read: “For me, video meant the chance to make cinema without having to ask anyone for anything.”

The exhibition featured many of the collective’s films, which were projected onto walls or played on old television sets, along with production stills and ephemera. In one 1976 piece, Seyrig reads a French translation of Valerie Solanas’s SCUM Manifesto into a dictation machine while Roussopoulos transcribes at a typewriter. In another, titled Sois belle et tais-toi (Be Pretty and Shut Up, 1976), Seyrig interviews twenty-four French and American actresses about the difficulty of working in the film industry as women. The collective also documented underreported struggles going on at the time. They made a video about a sex workers’ strike in Lyon, as well as several on demonstrations in support of trade unions, political prisoners, and the emerging gay rights movement.

Les Insoumuses made most of their films in the 1970s, but continued to collaborate on and off through the 1980s. In 1982, they took steps to preserve the cultural record of their movement by establishing the Centre Audiovisuel Simone de Beauvoir in Paris, an archive of their work and other feminist audiovisual media. In some ways, “Defiant Muses” was an apotheosis of their efforts to become agents of cultural production, free from social and political constraints. Through this work, Seyrig, who had long been the object of the camera’s powerful gaze, finally became its master.