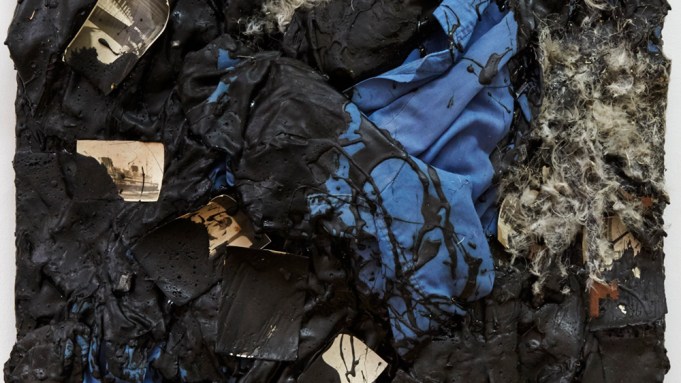 Most of the works in this poignant exhibition of assemblage-style paintings by Derek Jarman, “Shadow Is the Queen of Colour,” comprised canvases on which objects such as crucifixes, a whip, and bibles were slathered in tar. Jarman began this body of work in 1989, three years after he learned he was HIV-positive. The paintings were in part a howl against the homophobia of the church, the media, and Margaret Thatcher’s government, which introduced a law prohibiting the “promotion” of homosexuality in schools in 1988. Jarman, best known as an experimental filmmaker whose work celebrated queerness, was one of few figures in Britain to publicly acknowledge his diagnosis and denounce the stigmatization of the illness.

Jarman died in 1994 of AIDS-related complications. The last four years of his life were extraordinarily productive, involving a rich cross-pollination across disciplines. Around the time of his diagnosis, he bought a tar-painted fisherman’s cottage on the bleak coast of Kent, in the shadow of the Dungeness nuclear power plant, and set about cultivating a wild, borderless garden in the inhospitable stony landscape around the house. He created the paintings during a period in which he tended this garden; documented its flora in his diaries, which were published as Modern Nature (1991); erected lyrical sculptures from scavenged driftwood and other debris, materials that also found their way onto his canvases; and worked on his 1990 film The Garden, which reimagines the Passion of Christ in the torture and murder of a gay couple against the stark backdrop of the Dungeness scenery.

Many of the paintings share imagery and themes with the film: in Untitled (Egg and Clock), 1989, for instance, the tar that covers the egg and the clock is topped with feathers, recalling the savage tarring and feathering of the film’s protagonists. Other works are laced with the eroticism of the taboo, such as Leviticus (1989), in which barbed wire snakes across a crucifix and a bible, the work’s title referring to the Old Testament book prohibiting homosexuality as “an abomination.” Jarman was ambivalent about religion. He was opposed to the church as an institution but fascinated by Christ and the rites of worship. These paintings exude an enthusiasm for ritualistic performance in their religious symbolism and expressive physicality.

Two outliers, placed at the show’s entrance, employed oil paint rather than tar and featured small circular glass cases amid their compositions. One work was gold and the other a pink flesh tone. In the former, Matthew Mark Luke and John (1989), the glass component houses a condom and strips of paper, one of which displays the handwritten statement FUCKED LUKE FUCKED JOHN, culled from a poem Jarman wrote in his diaries. In the latter work, Flesh Tint (1990), the glass contains a found image of Christ provocatively obscured by another condom; toward the bottom of the canvas, three upward-pointing bullets nestle in the pink impasto.

Jarman of course follows in a long tradition of modernists who worked in painted assemblage, and Robert Rauschenberg advanced the concept earlier and further than he did. But Jarman’s constructions are haunted by the deaths of numerous friends he lost to AIDS and by his own sense of impending mortality, and this gives them a ferocity and a brutal poetry. At the end of The Garden, he recites the aforementioned poem. The words, a kind of eulogy, convey the despairing rage embodied in the paintings in this show: “I walk in this garden holding the hands of dead friends . . . My shaking hands cannot express my fury. Sadness is all I have, no words.”