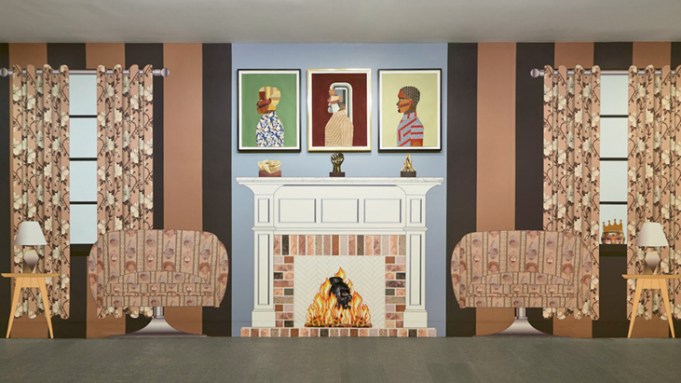 Derrick Adams’s exhibition “Interior Life” turned the Upper East Side town house now occupied by Luxembourg & Dayan into a simulacrum of its previous role as a domestic space. Dividing the gallery’s three floors into a sequence of discrete rooms, Adams hung twelve new collage portraits from his series “Deconstruction Worker” (2012–) on printed wallpaper-like mise-en-scènes representing the decor of a stylish bourgeois interior.

The portraits—bust-length depictions of anonymous but individualized figures in strict profile against monochrome grounds—distill the architecture of the human face into patchworks of geometric facets. Constructed from painted paper and, for the figures’ clothing, swatches of vibrant fabric, the collages seem to toggle between flat pattern and sculptural relief, an effect of Adams’s schematic chiaroscuro: a rectangle of deep ebony, for instance, indicating the hollow of a cheekbone. This interplay between flatness and depth was heightened by the similarly collage-style backdrops, which digitally combined boldly outlined illustrations of architectural features and furnishings with photographic elements.

On the ground floor, three framed portraits were installed over a fictive living room’s mantelpiece, which was flanked by images of two sleek chairs upholstered in fabric printed with African masks. Upstairs, two portraits were placed within a cozy, wood-paneled den, its shelves an artful arrangement of African sculptures, patterned vases, and books—poetry by Nikki Giovanni and Maya Angelou, the exhibition catalogue for Thelma Golden’s 1994 exhibition “Black Male” at the Studio Museum in Harlem, a biography of Marcus Garvey. In a roomy kitchen with gleaming appliances, Adams’s portraits mingled with soul food recipes tacked casually to the wall. Most striking was the bedroom, its walls a shock of red, in which facing portrayals of a man and a woman presided over a dramatically foreshortened bed whose patterned linens evoked kente cloths. The result was a curious trompe l’oeil: the framed portraits seamlessly blended in with their imaginary surroundings, as if absorbed into the wallpaper murals, while the printed environments and their accoutrements appeared to advance into the viewer’s space.

Who lives in this house? The press release suggested that Adams envisions the home as belonging to the figures in his portraits, as if he might illuminate their interior selves for the viewer by way of a tour of the spaces they inhabit. There is, of course, something to this: what is decor if not a collage of signifiers telegraphing class, education, and values? But the interior managed to feel specific and generic at once, laden with references to African American cultural and intellectual traditions, but also devoid of any real sense of the occupants’ personalities.

Adams’s work often takes up the ways in which the image of black culture and identity is shaped and refracted through mass media and entertainment. It’s no surprise, then, that the installation had the quality of a stage set, as if the furnishings had been inserted on a green screen: in each room, only one wall was covered while the others remained blank and gallery-white. The illusion was immersive, but only from a fixed viewpoint; with a turn of the head, it fell away, revealing itself as a paper-thin fantasy. Indeed, there was a menacing edge to these evocations of prosperity and domestic comfort: in the elegant fireplace, an African statue with human eyes was engulfed by cartoonish flames; in the kitchen, other statues sat in skillets on the stove. The television in the den bore the title card of the 1970s sitcom “What’s Happening!!,” which might be read as an existential cry: if a house like this represents a form of hard-won progress, the world outside keeps trying to claw that progress back.