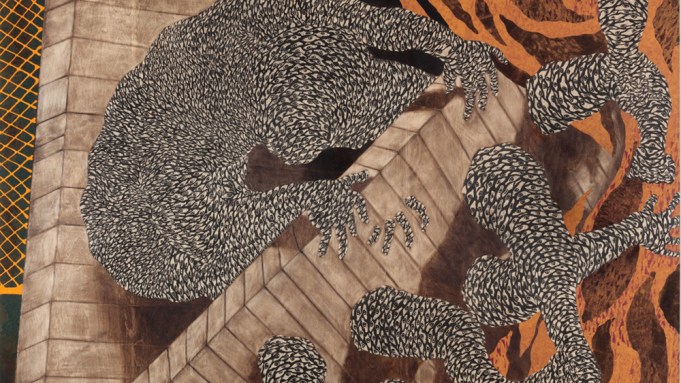 The twenty-one mixed-medium paintings in Didier William’s two-venue exhibition—the most ambitious showing of his work to date—were primarily large, more than seven feet long or tall in some cases, and elaborate, suggesting prodigious activity over the past year, when all of them were made. Their titles were in Haitian Creole and left untranslated, as the thirty-six-year-old Port-au-Prince-born American artist wishes to alert viewers to the linguistic challenges faced by his own parents and other diasporic people and to privilege communication with his compatriots. The exhibition as a whole, though, was given an English title, “Curtains, Stages, and Shadows,” announcing the central motifs of the works, most of which portray silhouette-type figures on stages framed by striped components suggesting colorful patterned fabrics.

Rendered on wooden panels, the works combine painted, collaged, and carved elements. The silhouette figures are composed of allover fields of small eyes incised into the supports and inked in black. Unlike Kara Walker’s silhouettes, William’s appear to teem with interior life, looking from the inside out, and everywhere. The omnipresent stages comprise areas of exposed panel stained and delineated as planks at raking angles (the off-kilter quality is especially pronounced in Kolan get manman yo, where the stage metamorphoses into a keyboard played by an antic figure). Screen-printed strips and patches of paper adhered to the works’ surfaces seem to pop slightly forward, while pours of acrylic medium and direct painting atop carved and collaged areas hem in the layers. The pictorial plane is relatively shallow, compressing all the visual and material energy.

In an essay accompanying the show, the cultural historian Jerry Philogene writes of William’s childhood in Miami and discusses aspects of Haitian culture to which the works refer: tiny machetes that form a surface pattern in one composition, for example, allude to a vanishing Haitian martial art, and heroines of the Haitian Revolution are the subjects of three small, portrait-like paintings. The artist is clearly toying with stereotypes of menace, undercutting it with a robust sense of humor. We do not know if the tall figure holding a shovel in the handsome Sa a selman m bezwen is industrious or malevolent, and presumably that indeterminacy is partly the point. William pays homage to contemporaries like Mickalene Thomas in Ki moun ki rele Olympia, with its reclining odalisque, as well as to Manet’s racially problematic Olympia; in Dantor a Anais, a relatively staid image of a mother and child, one senses an echo of Chris Ofili’s dung Madonna. And in the screen-printed collage elements there are hints not only of the colorful fabrics of West Africa but also of the works of Pattern and Decoration artists.

The strength of these paintings lies in their vivid and at times unnerving presence. A group of figures hovers in the air in Nou tout ansanm, their bodies embedded in a Spanish moss–like mass overhead and their flailing arms and legs casting an ominous shadow on the stage below. One cannot help but think of them as phantoms born of untold violence, but, even as the figures thrash about, the eyes that constitute them give them a kind of power. Not content to settle into the role of the “object” of our gaze—the Other—William’s figures stare out at us with eyes like those in a haunted forest. Even unborn, as with the fetus depicted in Depi nan vant manman m, they are characterized from without. Yet, wary and hyperconscious, their vigilance protects them.

The Greenworks 60V 21-Inch Self-Propelled Mower Makes Big Claims, But Does It Deliver?