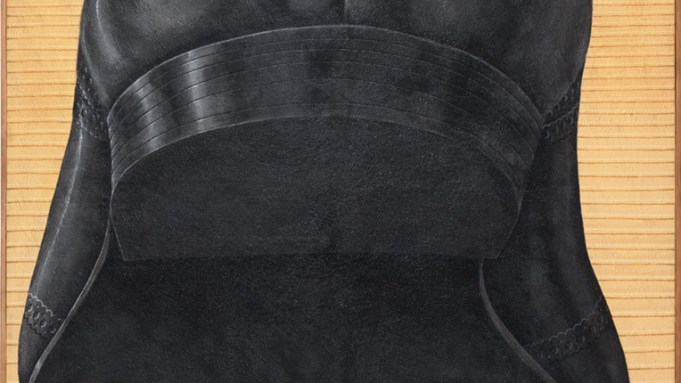 For this presentation of paintings by Domenico Gnoli (1933–1970), Luxembourg & Dayan gathered a selection of canvases that had never been seen in the United States or, in a few instances, had not been since here since the artist’s debut on these shores, at Sidney Janis Gallery in 1969. Gnoli died just months after that show, which was heartily received by American critics. His renderings of everyday objects shared a great deal with the work of artists on the Janis roster in the 1960s, particularly those featured in the 1962 proto-Pop “New Realists” exhibition, as well as other American and European painters working in a comparable vein. His images also echoed those of an older generation of European painters who between the World Wars had returned to realistic depictions of objects and whose work Janis had begun collecting in the 1930s.

Gnoli’s work, however, is distinguished from these various precedents by its close-up vantage points. The vast majority of his paintings are tight crops of objects or bodies that home in on materiality and texture—qualities that are accentuated or complicated by the medium the artist used, acrylic mixed with sand. The sprawling surface of the bed in Il grande letto azzurro (The Big Blue Bed, 1965) seems at first to defy the premise of the exhibition, which was titled “Detail of a Detail.” Yet one’s eye is immediately led to the silken teal-colored coverlet cascading down the bed’s front, with floral-patterned embroidery painstakingly rendered across it. Although foreshortened, the bed offers not a sense of its extension into the room but rather the spectacle of the lustrous, stitched fabric. Gnoli’s realism is a decidedly stylized one. La chemise sur la table n. 3 (Shirt on the Table n. 3, 1967) is another painting that focuses on fabric draped on a flat surface, this time a white shirt hanging off a kitchen table, its human silhouette lending the image an uncanny presence.

The Windsor knot shown in Red Tie Knot (1969) might easily be mistaken for a clothed woman’s midsection, a frequent subject in Gnoli’s oeuvre. The tie’s cropping brings to the fore the fabric’s thin striations, upon which reflections of light are conveyed with subtle white touches. Similar reflections gleam on the wooden contours in Chair (1969), the lock of brown hair in Curl (1969), and the black leather in Scarpa di fronte (Shoe from the Front, 1967). Such details, however, register only a modicum of ambient information. Sous la chaussure (Under the Shoe, 1967) depicts a shoe raised off the ground in mid-stride, the image imparting a rare suggestion of duration in Gnoli’s work—a sense of time in addition to objecthood. Still, the shadow beneath the shoe occupies a flattened ground that forecloses any sense of three-dimensional space and thereby counters the impression of physical and temporal movement.

Brick Wall (1968) presents a section of a brick wall and a swath of the sidewalk below it. The wall—a relatively uniform surface compared to those highlighted in the other images—directs attention to the subtle shifts of red and pink across its gridlike masonry. Capigliatura maschile (Male Hairdo, 1966) portrays its subject with smooth, rounded curves that conjure the tumescent anatomies seen in Fernando Botero’s paintings.

Like much work redolent of Pop in mid-1960s Italy, Gnoli’s must be considered in relation to the country’s so-called economic miracle, which reached its apogee by 1963. This was a period of significant social and political change and prosperity during which Italians were inundated with new commodities and conveniences. The objects in Gnoli’s repertoire bespeak this quality of unprecedented material comfort. Though his work often evokes the metaphysical paintings of Giorgio de Chirico, its clipped framings and unexpected perspectives do not disorient the viewer so much as reveal benign plays of detail hiding in plain sight.