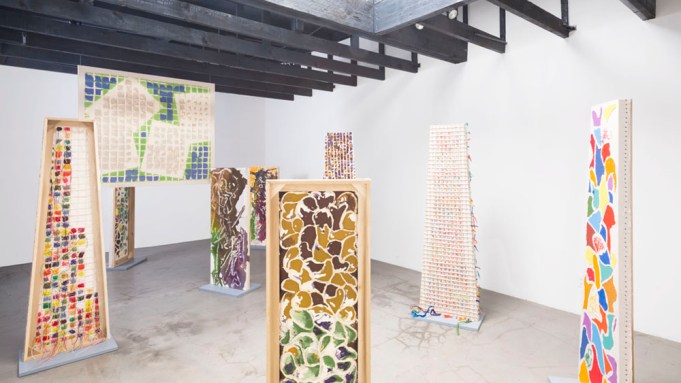 The paintings that Pennsylvania-based Dona Nelson has been making in the most recent years of her nearly five-decade career are commonly referred to as double-sided, but that description is incomplete and limiting. Nelson does engage the canvas’s front and back in a rich, reciprocal relationship, but the sides matter, too. For some works in this vital show, titled “Painting the Magic Mountain,” she wrapped the canvas around stretcher bars and stapled it to the back, but in many cases she pinned the fabric’s raw edges to the sides of the wooden frames, activating otherwise uneventful planes with bold, staccato lines of tack heads. In a painting suspended overhead, the bottom played a role as well. It’s not a metaphorical leap to suggest that Nelson’s paintings also have an inside and outside. Every dimension of her multidimensional work is made relevant.

Eighteen pieces (one 2018, the rest 2019) were distributed among four rooms. Most of them, apart from the ceiling-mounted one and a few hung on the wall in the usual way, stood upright, held in steel stands placed on the floor. The pieces addressed the architecture of the gallery and assumed architectural presence themselves as space-defining panels or screens. Eight works in one room (all wryly titled either Shorty Q or Shorty A) were resonant with the scale of the body. In another room, a particularly large work, Crow’s Quarters (seventy-eight by eighty-four inches), stood alone, positioned at a diagonal, as much an intervention as a display. Continuously moving around the paintings in the show led the viewer to gather observations about them in a process that felt akin to the artist’s dynamic, spatiotemporal one.

Working with acrylic on unprimed canvas, Nelson pours, drips, and douses. She applies slicks of clear or pigmented tar gel, a thick acrylic medium. She glues diaphanous ribbons of cheesecloth to the surface, sometimes tearing them off to generate stencil-like absences and textural trauma, including rips that she either patches or leaves agape. She sews the canvas with painted string, her stitches ranging from discrete hatch marks to pseudo-linguistic notations, bursts of directional momentum to coarse gestures of repair. The unrepaired tears and the unthreaded holes that Nelson leaves in the canvases are among her many methods of allowing light to pass through. Another is her strategy of displaying the works off the walls, which allows the thin painted fabric to become like stained glass. In a single painting of hers, the surface might read, by turns, as intact, compromised, porous, opaque, and translucent.

There’s a fierce sense of play in Nelson’s manner of simultaneously establishing and challenging order, of asserting a structure and improvising over it. Sometimes she lays her pieces of cheesecloth down in a grid that she then deviates from or overrides. In two of the standing paintings, the grids’ compartments are neatly filled with asterisks of string painted sunny yellow, blue-violet, persimmon, wine, and mustard. On the reverse, those strings tangle informally, loose ends dangling. String serves in Nelson’s works as a component of the weave or grid gone rogue. There’s a distant hum of Eva Hesse here, and in the rapturous wrestle with materials, evidence of Nelson’s influence on a younger generation of mixed-medium action painters, like Iva Gueorguieva, one of her former students at the Tyler School of Art and Architecture in Philadelphia.

A few pieces in the show suffer from something like overstimulation, the paint devolving into frantic murk. Much more often, though, Nelson’s palette has a gemlike intensity or subtle softness, and the work exudes an enthralling energy. Each canvas is the record of a charged performance that invites and rewards our own physical participation.