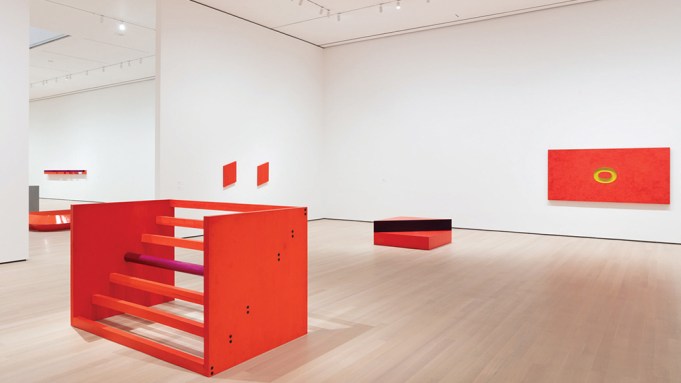 The space at the top of the escalator leading to the Museum of Modern Art’s sixth floor is typically a crowded gift shop. When I visited the museum in early March, that space had been transformed. Instead of art-related trinkets, posters, and postcards, there was a neat display of boxy pine furniture and carefully arranged books with monochrome covers. This was the introduction to “Judd,” the first retrospective dedicated to Donald Judd in the United States since 1988. The furniture pieces were his own designs, two large tables with matching chairs and a deep-seated bench. Placing such functional work at the entrance to the exhibition, curator Ann Temkin seemed to be positioning Judd’s practice in conversation with early avant-garde movements, such as Constructivism, Neoplasticism, and the Bauhaus, that challenged traditional distinctions between the fine and applied arts. Such a framing would make sense, since Judd, who did not identify as a sculptor, pushed against the convention of dividing the arts according to medium and use.

In His Writings and Public Statements, Donald Judd Wrestled With What It Means to Be an American Artist

Judd began making cleanly designed three-dimensional “objects” after abandoning painting in 1960. His stripped-down approach, along with that of artists like Anne Truitt, Frank Stella, and Robert Morris, helped to establish a new mode of art-making, which became known as Minimalism. In his influential 1965 essay “Specific Objects,” Judd, a prolific art writer, generated a vocabulary with which to describe and evaluate this new work, locating its primary divergence from modernist art in the difficult fact that it was “neither painting nor sculpture.” The works he discussed in “Specific Objects,” by artists including Jasper Johns, Robert Rauschenberg, Dan Flavin, and Yayoi Kusama, varied greatly in style and approach, as Judd himself pointed out, though they all demonstrated a tendency toward three-dimensionality and an open “objection” to painting and sculpture as meaningful classifications in their own right. Judd argued that “the best new work” being made in the early ’60s refused validation via stylistic or generic categorization. United in its avoidance of illusion and reference, the new work demanded an assessment of each specific work according to its specific circumstances.

“Judd” offered a chance to view the artist’s pursuit of this idea over three decades. (He died in 1994.) Arranged chronologically, the exhibition presented groupings of works that roughly coincided with different phases in Judd’s career. The first room was dedicated to his earliest three-dimensional objects, which he made between 1960 and 1963: large wooden floor pieces and wall reliefs painted mainly in bright cadmium reds. Some of them were first featured in the 1963 solo show at the Green Gallery in downtown Manhattan that established Judd as a central figure in the generational shift away from modernism. While Judd quickly left behind the hand-painted, multipart compositions of such work in favor of more uniform, industrially manufactured designs, the main components of his later practice can be seen here. Works such as a low-lying object from 1963 that suggests a solid box with a triangular portion excised from its top, a purple piece of plexiglass installed across the diagonal slice, demonstrate his preferences for clean edges, eye-catching colors, and open spaces.

In fact, as the viewer moved from the objects in the first room (made when Judd still had to rely on found materials and his own carpentry skills) to those that closed the show (blocky, polychromatic enameled-aluminum pieces fabricated by the Swiss manufacturer Lehni AG), what emerged was primarily a narrative about Judd’s expanding means of production. In other words, the exhibition did not so much track Judd’s developing sensibility or shifting conceptual concerns, as one might expect from a retrospective of an artist’s work, but, rather, showed his ability to access ever more refined materials and sophisticated industrial manufacturers.

This isn’t necessarily a bad thing. The beautifully fabricated objects are impressive in their unvarying commitment to a handful of design principles, including the play between open and closed form, sensitivity to the specificity of material, and responsiveness to architectural space. This commitment, however, raises important questions concerning Judd’s status as a designer and the place of design more generally in the history of twentieth-century abstraction and avant-garde practice. And while Judd’s furniture greeted viewers before they entered the show and as they left—two of the artist’s “Wintergarden Benches,” designed in 1980, sat just outside the last room—these questions were left largely unexamined in the galleries. The exhibition catalogue, which includes essays on Judd’s longtime use of manufacturing companies as well as on his understanding of himself as a furniture designer and architect, offers important insight into the overlap between Judd’s roles as artist and designer. However, by restricting the exhibition proper to a chronological showing of his most gallery-friendly work, the retrospective offered a far-too-familiar portrait of Judd as the maker of slightly alienating abstract sculptures. Viewers can sense the ambiguity at the core of his work when it’s presented in a large survey like this, but the curatorial approach resisted that ambiguity, offering a more conventional picture of Judd as the maker of autonomous works of art and undermining the challenge posed by his redefinition of art as “objects.”

While Judd has not had a retrospective in the US in three decades, his work is not difficult to come by. It can be found in permanent collections around the world and in frequent gallery shows and group exhibitions. Given the work’s ubiquity, one would expect a major retrospective to offer something new. Far from readying the audience to deal with the real implications of Judd’s category-defying, object-based approach to art-making—one that, as he put it in the 1965 essay, potentially “opens to anything”—this exhibition perpetuated the separation of Judd the designer from Judd the Minimalist, preventing any serious confrontation with the value systems that keep the two roles apart.