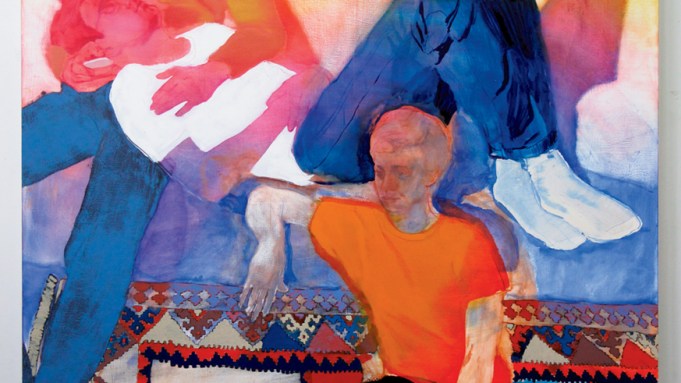 Israeli-born, Brooklyn-based artist Doron Langberg invigorates the centuries-old traditions of genre painting and portraiture with high-key images whose surfaces combine myriad, at times discordant, textures. Among the effects encountered in the fourteen canvases in this exhibition were swiftly laid down washy passages, thick tarlike swaths, tightly rendered patterning, and flat areas of pure color. In addition, Langberg has a knack for capturing human expressions and gestures, with the distinct personalities of his figures adding to the works’ vitality.

Friends and lovers are among Langberg’s favored subjects. Louis, Tristan, and Sarah (2017) is a nearly six-foot-high canvas featuring two young men on a sofa, one with his head in the other’s lap, and a young woman sitting on a patterned carpet on the floor, gazing absently beyond the picture plane. The scene seems almost irradiated, with various components rendered in glowing oranges and pinks, and a T-shirt in blinding white. Looking closely, one notices that the faces are composed of mere suggestions: a few swift strokes add up to a likeness. Despite an atmosphere of relative contentment, things in Langberg’s works often feel impermanent. Edges blend and passages are wiped or scraped away to reveal the canvas underneath. Such techniques convey the sense of fading memories.

In Morning 2 (2018), Langberg takes up the art historical theme of bathers. A showering man, portrayed in fleshy pinks and thin red washes, raises his leg to scrub his knee. His body is ethereal and seems to dissolve into the water that falls on him. By contrast, the coral-colored sink in the foreground is solid and commanding, with a small pair of scissors perched along its edge drawing one’s gaze down into the basin. The best representational painting can permit a humble object to transcend its utility, and this pink sink feels more like a monument than a household fixture. Four smaller paintings were displayed near Morning 2. Presenting close-ups of flacid or erect penises and a man spreading his butt cheeks, these works were jarring in the way that receiving unsolicited X-rated pics on your phone can be. With their unmediated frankness, they abandoned the mystery and ambiguity that enriched the larger paintings.

The seven-foot-long Morning 1 (2018) was the most accomplished work on view. A young man lies on his stomach on a bed, his face turned away from the viewer. Most of his body is covered by a blanket, save for his wide, pearlescent back and pink foot. Despite the limited view, one gets the impression of the figure’s heft. The planked flooring is painted in jewel tones that contrast with the soft pastels of the flesh and bed linens, while areas of heavy impasto and soft spray-painting impart a tactility that amplifies the sensuousness of the scene.

Langberg’s intimate paintings can make one feel a little voyeuristic. But any ogling is interrupted by the magnetic pull of the works’ complex surfaces. Throughout the paintings, Langberg finds a balance between experimental technique and verisimilitude. He ensures that neither component dominates, and uses the tension between the two to produce a kind of vibrating harmony.