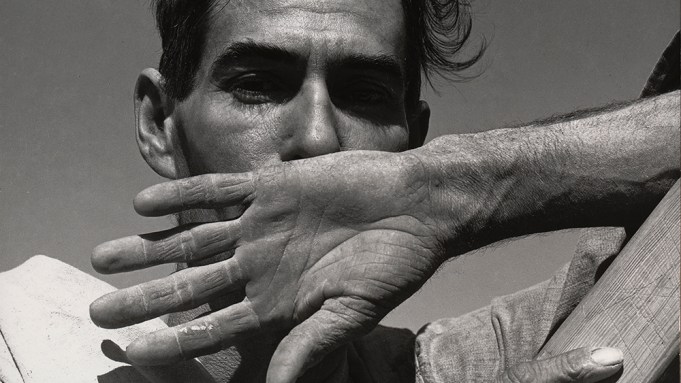 Near the entrance to this exhibition of work by trailblazing twentieth-century documentary photographer Dorothea Lange we confront the image of a migratory cotton picker, whose calloused palm hides his mouth from our view, as though to signal his reticence. The image dovetails with a nearby wall text, in which Lange conveys her desire to photograph the underprivileged without taking their privacy and dignity from them. But it also suits an exhibition that contains fewer words than one might expect from a show titled “Dorothea Lange: Words & Pictures.” Undoubtedly, we learn about the importance of words to Lange’s photography from the wall texts. There are also some vitrine-bound selections of Life magazine stories to which she contributed, a brief glimpse into Archibald MacLeish’s poetic “illustration” of her work, and reading areas with perusable copies of the text-heavy catalogue. But alongside the photographs themselves, there are surprisingly few examples of the captions and text that Lange and her husband-collaborator, the agricultural economist Paul Schuster Taylor, described as integral to their practice. The exhibition’s theme is perhaps most clearly demonstrated in the section titled “Pictures of Words,” where photographs of a sign warning against vagrancy and of a racist Southern Pacific railroad billboard (“it takes 8 tons of freight to k.o. 1 jap”) register the persecution of the poor and the nonwhite within the discourses of state power and commerce.

Fortunately, Lange’s photographs speak volumes on their own. She produced many of her most recognizable images for the Farm Security Administration during and after the Great Depression: the last period in American history when income inequality resembled what it has become in recent decades. There are glimpses of workers asserting their power, such as Lange’s documentation of San Francisco’s 1934 May Day rallies, but these are few and far between. More often we find signs of despair, as in Woman of the High Plains, Texas Panhandle (1938), which captures a woman with her face puckered and her hands gripping her forehead and neck. Or else we see folks simply getting on with the hard realities of working life, as with the line of field laborers in Near Westley, California (1938). Alongside the plowed but unpeopled farmland in Tractored Out, Childress County, Texas (1938), a helpfully included caption by Lange and Taylor informs us that tractors displaced not only mules but human workers.

In a section on Lange’s iconic 1936 Migrant Mother photograph we learn that the weathered face before us is that of a woman of Cherokee descent—a fact unknown during Lange’s life, and one that might have affected the work’s legacy. Here, as is often the case in Lange’s pictures, the subject’s hand—positioned in proximity to her face—lends the image its expressive power. In a lesser-known photograph from a series documenting California’s racist justice system and shot between 1955 and 1957, a black defendant clutches his head despairingly, his blurred fingers signaling what his covered face cannot. In a different corner of the same gallery, an intervention by contemporary artist Sam Contis responds to this facet of Lange’s work, presenting multiple photographic details of the hands of her subjects.

Some of the most striking photographs on view are Lange’s images of young people: a black girl metaphorically imprisoned behind an ivy trellis; a solemn-faced white girl whose hands grip a barbed-wire fence. Many children of this era would grow up to see better days in the wake of the New Deal and under the more broadly distributed prosperity of the postwar period. Gazing at their faces, we are made to wonder if the same will hold true for the children of today.

Georgia Is Trying to Kill Protests With Terrorism Charges. Activists Are Undeterred