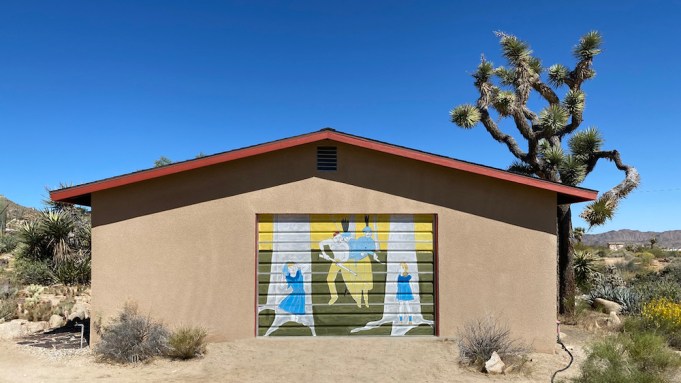 Ault + Beck (2019) by James Benning is a simple wooden sign bearing the Joshua Tree, California, address of his artist friends Julie Ault and Martin Beck (in better times, Benning often visits them). When their old house sign grew too weathered, the two asked Benning to replace it. He lettered the sign in the blocky, born-again style of “outsider” artist Jesse Howard, even including Psalm 148:8, a line about storms and hail. (The next day, it snowed—a desert miracle.) The sign is included in “Down the Rabbit Hole: JB in JT,” an online exhibition hosted on the website of the Los Angeles gallery O-Town House that pairs photos of Benning’s work arranged in Ault and Beck’s home with descriptions of each piece written by the three friends. The texts offer glimpses into the artists’ relationship, their shared interests, and the way these bonds structure their corners of the art world. At a time of isolation, the project reflects on how artworks can recall the absent friends who made them: for an exhibition that is essentially pictures of someone else’s collection posted on a website, it is strangely bittersweet.

Benning is best known as a structuralist filmmaker, but the exhibition opens a window onto his more homespun practice of channeling American folk artists like Henry Darger and Bill Traylor by producing pieces in their respective styles. After Traylor (2004), for instance, a crude pair of drawings on cardboard displayed atop a pile of books, copies Traylor’s silhouettes of a woman in a rocking chair and a startled looking bull. Many of these works have been gifted to friends, while others adorn the walls of two cabins Benning constructed on his property in the Sierra Nevada, replicas of the retreats of Ted Kaczynski and Henry David Thoreau, respectively. The cabins, described in (FC) Two Cabins by JB, a 2011 book edited by Ault (and depicted in the show, open on a wooden box), map the spiritual poles of antisocial living: love of nature, and hatred of civilization. In their own cabin, Ault and Beck display Freedom Club (2009), a carved wood sign naming the fictional group of environmental terrorists to whom the Unabomber attributed his crimes. (Benning originally made the sign to decorate his Kaczynski cabin, later replacing it with one reading “FC.”)  After Thoreau (2011)— a copy of one of the property drawings Thoreau made for his day job as the town surveyor of Concord, Massachusetts, in the 1850s—is presented in a vintage tramp-art frame on a white brick wall. The obsessive way Benning studies folk artists and the informality with which he disperses the results evoke the spirit of his sources. Benning rarely exhibits these works—with the notable exception of a handful of shows curated by Ault.

Benning explores the role of compulsion and loneliness in the artistic process. At the same time, he demonstrates how art can anchor conversation and community—most clearly represented in the Joshua Tree cabin by After Beck 11 × 15 3/4 (2013), a plywood rectangle painted black. Benning traded the piece, the story goes, for one of Beck’s paintings of the same size; he meant to reproduce the original, but it was beyond his ability. Benning’s painting now hangs where Beck’s once did. The “JB in JT” artworks mark out the way ideas and objects serve as tokens within a coterie of artists, whose friendships and careers grow intertwined. The provenance of the monochrome rectangle on the plain wall is as intimate as it is professional.