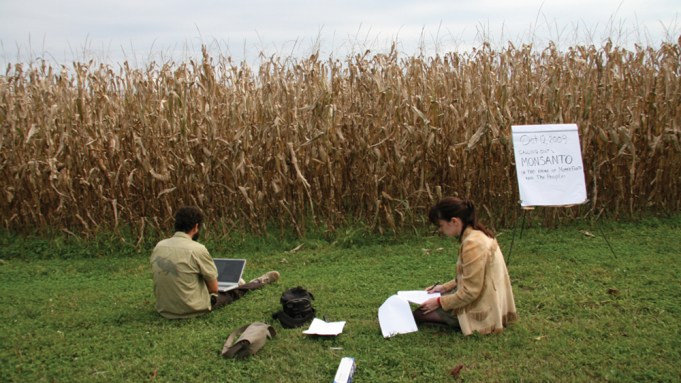 Compass, a loose group comprised mostly of artists and active mostly in the Midwest, can be difficult to describe. Since 2008, its members have refined practices of experimental tourism, undertaking multiday “drifts” across a network of art sites and activist communities around Illinois, Michigan, Wisconsin, and beyond. Compass’s excursions explore how America’s industrialized hinterlands have shaped and been shaped by global capital, while also building relationships among people who are stewarding spaces of cultural and political resistance in migrant-majority factory towns, on cooperative farms, and at small-town public universities. Out of this intensive fieldwork, affiliates have produced books, colloquia, videos, and performances, though not always under the Compass name. The group’s work is often incorporated into other platforms that its members are involved in, like conferences or exhibitions.

“The Earth Will Not Abide,” a group show that debuted last year at the University of Illinois at Chicago’s forward-thinking Gallery 400 and is now on tour, is one such platform. The Compass name does not appear in any of the didactic materials, but the show nonetheless provides an overview of the group’s recent activity, featuring projects by longtime affiliates duskin drum, Ryan Griffis, Brian Holmes, Sarah Lewison, Claire Pentecost, and Sarah Ross, as well as Alejandro Meitin of the Argentine eco-art group Ala Plástica. The works emerge from drifts and research trips conducted independently in the Midwest, South America, and China. All address the unsustainability of industrial agriculture in an age of ecological crisis and are in dialogue with one another, formally and conceptually.

The ambitious scope and scale of Griffis and Ross’s installation A Great Green Desert (2017) arguably put it at the center of the conversation. Its four-channel video weaves together images of Illinois’s “corn belt” and Brazil’s “soy frontier” in a syncretic intercontinental landscape—wetlands, fields, silos, combines, and ports fade up and down in a graceful visual counterpoint. Distant, ostensibly distinct ecosystems appear as a single globalized terrain, rendered indistinguishable by a standardized regime of grain production that gives the appearance of abundance while depleting fertile land.

Griffis and Ross’s agile editing contrasts with their cinematography. Shot mostly with handheld cameras, the footage suggests single-take location scouting rather than belabored art direction. This aesthetic recurs in Lewison’s Naxilandia in the 17th (2008–), a multichannel video about a rural Chinese community, and in the video component of Meitin’s Who Designs Territories (2015), a didactic display about transnational cooperation on port construction and export infrastructures in South America. Maps are another common feature, used in Griffis and Ross’s installation and in Meitin’s collaboration with Holmes, Open Veins of the Americas: Living Rivers/Rios Vivos (2016–), a comparative study of environmental impacts of extraction economies on Midwestern and South American watersheds (unfortunately, this project’s most remarkable visualizations languish in a small, unwieldy touchscreen interface). With so many field documents and cartographic works, the show feels like a research archive—a document of a process of inquiry more than a distillation of conclusions.

Works by Pentecost, Lewison, and drum are stylistic outliers, yet still refer back to explorations in situ. Pentecost’s “Pandora’s Basket” (2017), a trio of dark, expressive oil paintings, provides a phantasmagoric index of farm equipment, processing plants, and waterways—places that other works present by more conventional documentary means. Lewison and drum’s text piece Cornstitution: An Anthermation of the Rights of Maize (2010–) centers on a tongue-in-cheek declaration of rights for genetically unmodified corn species, which are increasingly endangered. Hanging alongside the text are two photographs of a performance-cum-workshop conducted at a cornfield, where notes for the manifesto were scrawled on an easel pad.

In an exhibition that takes on the challenge of making abstract flows of capital legible, the tendency to privilege process poses a problem: how to communicate compellingly in the white cube the experience of drifts and immersions that unfold over vast spaces and long durations. “The Earth Will Not Abide” does not resolve this challenge, so much as resolve to struggle with it. In ways that are urgent but not necessarily satisfying for the viewer, the works point out of the gallery, to territories where more intensive, charged work unfolds.

This Roaster Is Brewing a $150 Cup of Coffee, but Only a Few Lucky People Will Be Able to Taste It