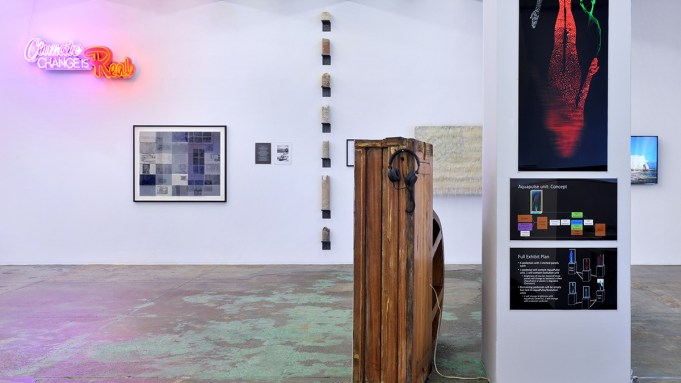 Tellingly titled “ecofeminism(s),” the group show now accessible online and in person at Thomas Erben Gallery stresses the ongoing diversity of ecologically centered art by women. Organized by independent curator Monika Fabijanska, the exhibition has some clear similarities to Eleanor Heartney’s recent six-artist roundup for this magazine. The period covered is roughly the same, from the 1970s to the present, and three of the artists overlap: Agnes Denes, Aviva Rahmani, and Betsy Damon. The exhibition and the article both trace a vital artistic lineage that nonetheless, in Heartney’s words, “often fails to register in the mainstream art world.” Yet “ecofeminism(s)” is an encouraging sign that attitudes may be changing in light of global warming, growing feminist self-confidence, and a burgeoning art world emphasis on social justice.

Critical Eye: Art in the Age of Sexual Disruption

In 2018 at the John Jay College of Criminal Justice in New York, Fabijanska curated “The Unheroic Act,” an astute, widely reviewed survey of postwar and contemporary art about sexual violence. Now she once again covers an impressive stretch of aesthetic and historical ground—this time using twenty-six artworks by sixteen female artists. But what stands out is the cohesiveness of her curatorial vision. Particularly through her inclusion of works referencing Indigenous cultures, Fabijanska makes the case that ecofeminist art employs a greater range of formal modes than is commonly acknowledged, from the polemical to the comic to the spiritual.

Early ecofeminists such as Rahmani, Denes, Damon, and Ana Mendieta—all represented here by photo-documentation of iconic pieces from the late ’70s and early ’80s—incorporated their own bodies into works about the land, creating a formal repertoire on which subsequent generations of artists have drawn. The absurdist element in contemporary performance-based works by Mary Mattingly, Jessica Segall, and Hanae Utamura—the last of whom, for example, filmed herself mopping a sun-baked desert (Wiping the Sahara Desert, 2010)—underscores the latent absurdism of earlier gestures, such as Rahmani flushing ocean water down a CalArts toilet (Physical Education, 1973) or Denes chaining together trees in an earthy ritual (Rice/Tree/Burial: Chaining the Sacred Forest, 1977/2020). Likewise, the contrast between flashy medium and sober message in Andrea Bowers’s eponymous neon-sign piece, Climate Change Is Real (2017), evidences how a knowing comic streak runs through a genre often misconstrued as overly earnest because of its politics.

Designed to facilitate such cross-era and cross-genre comparisons, “ecofeminism(s)” feels a bit like a family reunion—not so small as to be insular, but not so large as to be overwhelming. One great pleasure is seeing lesser-known works situated in kindred context. Bilge Friedlaender’s cluster of nine ochre linen-paper tubes, Cedar Forest (1989), for example, chimes with Damon’s textured cast of a dry riverbed, The Memory of Clean Water (1985), and encapsulates the exhibition’s mood of gritty tenderness. Helène Aylon, who recently died from COVID-19, was better known than Friedlaender but still under-recognized. Her performance The Earth Ambulance (1982)—in which a group of women used an ambulance to “rescue” soil from Strategic Air Command nuclear military bases, then stowed it in pillowcases (“another kind of sack”) and took it along to peace demonstrations—is an iconic fusion of ecological and geopolitical art.

While ecofeminist art’s political and intellectual contexts have shifted dramatically over the years (from the Cold War to an overheating planet), one constant is the way practitioners look to Indigenous cultures for alternatives to the capitalist paradigm. Fabijanska avoids the pitfall of romantic idealization, by focusing on land rights concerns as much as on spiritual connections to nature. Carla Maldonado’s film Dystopia of a Jungle City, and the Human of Nature, 2019, examines the struggle to maintain an Indigenous life-style in the face of Amazon deforestation; Eliza Evans’s All the Way to Hell, 2020, is a group action in which the artist proposes to sell the mineral rights to three acres of her land to 1,000 disparate individuals, thus creating a bureaucratic snafu meant to inhibit oil and gas extraction on the site. Drawing on Indigenous visual idioms, Mendieta and Cecilia Vicuña have demonstrated humble, lifelong commitments to the cultures they portray. But it’s Sonya Kelliher-Combs’s Mark, Polar Bear (2019), an American flag bonded with polar bear fur in gel medium, that bids to supplant Jasper Johns’s encaustic flag in the country’s symbolic self-imagination. Inspired by her Iñupiaq and Athabasca ancestors’ use of animal pelts and membranes, Kelliher-Combs’s fuzzy, almost indecipherable flag is, like the exhibition itself, just the right blend of familiar and strange.