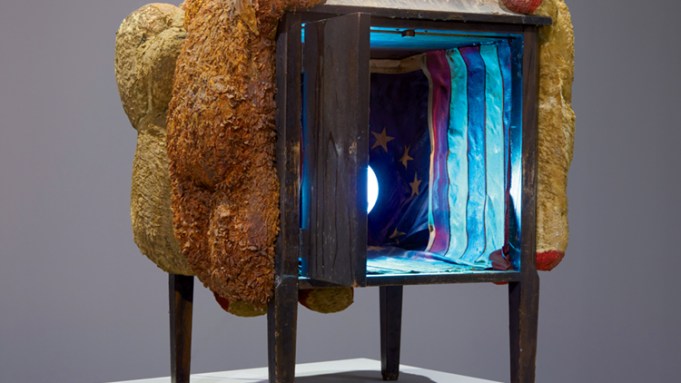 Today, Edward Kienholz (1927–1994) is regarded as a canonical Los Angeles artist and, as cofounder of the Ferus Gallery with Walter Hopps in 1957, an organizational catalyst for that city’s art scene. But a year before Kienholz died, Mike Kelley lamented his exclusion from the mainstream histories of 1960s art—which privileged Minimalism and Pop—claiming that his work resembled the countercultural scrap heap “a little too closely.” Blain|Southern’s exhibition “America My Hometown” focused on this early period of Kienholz’s art, bringing together sixteen works he made before he began, in 1972, to collaborate with his wife, Nancy Reddin Kienholz, to produce the sort of large-scale tableaux and immersive installations that are now synonymous with the Kienholz name.

The show spanned 1954 to 1967 and began with wall-mounted works, including an abstract painting on masonite and pieces in which the artist expanded his painting practice by incorporating found items like a garden hose and taxidermy deer parts. The presentation in this first room culminated with a tableau, The Nativity (1961), that hinted at the installations that would become the Kienholz duo’s signature. Kienholz assembled the biblical figures in his satirical nativity scene from junkyard scraps, profaning both Christian iconography and the American consumerist doctrine of disposability. A Dodge hood ornament crowns one of the Wise Men. The head of the infant Christ lying in his straw-filled manger is a flashing orange circular reflector, his torso a metal canister finished with a pair of plastic doll legs.

The second gallery, with its gray-painted walls and low lighting, had a theatrical ambience that befitted the exhibition’s title work, a small pedestal-based assemblage from 1963. Grimy American flag parts line the inside of a wooden cabinet, on the outside of which is a lumpy carapace of rotted-looking teddy bears. A lightbulb affixed to the back of the cabinet illuminates the interior, giving it a sickly green glow (though the color appears blue in Blain|Southern’s photographs). Atop the box is a row of red, white, and blue light bulbs, but if this is meant to evoke a marquee, the spectacle being advertised is a letdown—the object suggesting something like a coin-operated peep show with no show inside.

On the opposite wall hung ten examples, dating from 1963 to 1967, of Kienholz’s “Concept Tableaux”—a series of proposals for ambitious tableaux that speaks to his status as a Conceptual artist avant la lettre. Each proposal comprises a framed set of typewritten instructions and a brass plaque engraved with the title of the tableau being put forth. Each work could take three different forms, with successively higher prices: the buyer could purchase only the plaque and description, could go a step further by commissioning the artist to make a drawing representing the tableau described, or, finally, could have the full project produced. (Only two of the tableaux, neither represented here, were ever realized.) Many of the descriptions are vague. Three tableaux Kienholz conceived in 1963 would be identical, each named The God Box, a 1940s slang term for the pipe organ. Their size would be “somewhere between Reich’s Orgone Accumulators and a Western outhouse,” and their purpose “to stimulate thoughts on organized religions and what they have done to and for civilization.” While it’s hard to picture the actual form these pieces would take, the descriptions make a poetic kind of sense: the scatological humor of “Western outhouse,” for example, instantly deflates the idealism of Austrian psychoanalyst Wilhelm Reich, who in the 1930s proposed a device to tap libidinal energy and transform the world through free love. The failures of such 1960s utopian notions seem very clear today, given the constant catastrophes occurring around the world, due not least to issues of organized religion. As “America My Hometown” demonstrated, perennial topicality is the curse of Kienholz’s oeuvre.