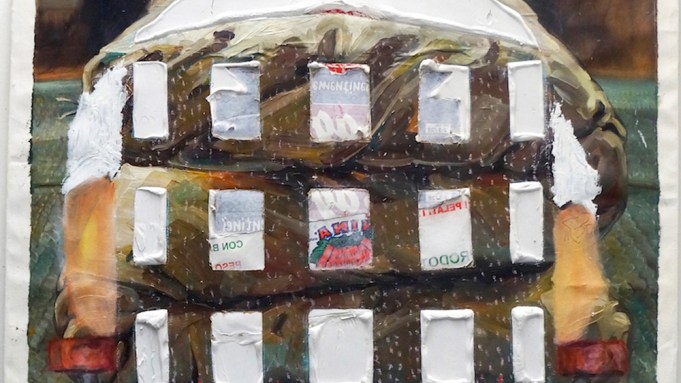 Most of the ten paintings in Eleanor Aldrich’s exhibition, “Main Squeeze,” portrayed the suppleness of human flesh through close-up depictions of people’s backs pressed into woven or vinyl-cord lawn chairs, hammock nets, and chain-link fencing. The Tennessee-based artist used materials including caulk and silicone to produce tactile, weirdly realistic images of squishy bodies and translucent skin. Occasionally, she embellished the paintings’ surfaces with thumbtacks, printed material, and other found items.

In The Reader in a Hammock (2019), a woman wearing a bikini top and denim shorts reclines in a hammock, her fat squeezing through the ropes’ diamond pattern. An open magazine composed of torn clippings glued to the canvas rests on her lap, displaying a Budweiser ad. The gobs of her flesh are rendered in silicone mixed with oil paint, and create their own shadows and highlights, while her hair is made of yellow and white paint that Aldrich cut into grooves using a notched masonry trowel. Faint brushstrokes suggest rays of light falling from above. In giving this woman a trashy rag and calling her “the reader,” Aldrich offers a witty take on a historical genre of portraiture.

Aldrich was raised in a small ranching town outside Flagstaff, Arizona, where her mother was an elementary school art teacher. According to the artist, the nature of children’s art classes—in which wads of glue and glitter predominate—influenced her idiosyncratic tendencies. In Lawn Chair with Country Magic (2018), she created the cords of a lawn chair by applying lines of orange and yellow silicone to the painting’s surface as if she were a baker piping icing onto a cake. Thumbtacks represent studs on pairs of jeans in Snake Eyes and Country Magic with Embellished Jeans (both 2019), while newspaper transfers—made by pressing newspaper pages to the silicone while it was still wet—create patterning on the woman’s shirt in Nanette (Back With Fence), 2018. There’s a junked-up, lived-in quality to Aldrich’s paintings that counters the ordered appearance of the chair, hammock, and fence designs, as well as the tight cropping of the compositions.

Aldrich’s paintings are intimate, but it’s a forced intimacy. The subjects, whose faces are never shown, seem to be unaware that they’re being ogled. The aforementioned studded jeans drop below the canvases’ bottom edges, making us feel like spectators spying a body bulging over the edge of a seat in front of us. Reader in a Lawn Chair (Rose Tattoo), 2018, draws the eye to the subject’s bare neck, black bra straps, and faded lower back tattoo. But Aldrich renders such details lovingly, seeming less a voyeur than an artist interested in elevating the flesh in all its unruliness.