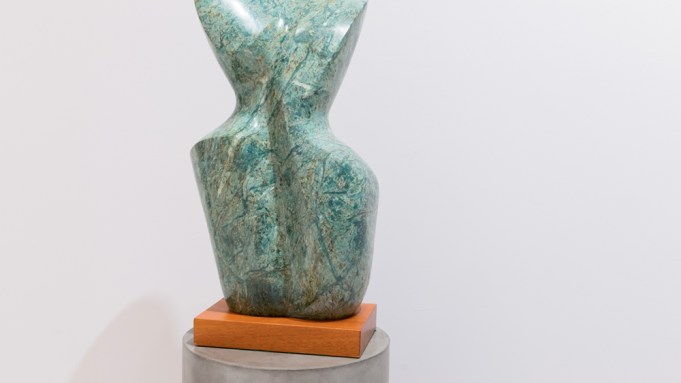 Elizabeth Catlett explored themes of race, gender, and class in her prints and sculptures, not only portraying the types of injustices she knew all too well as the granddaughter of slaves but also focusing on strategies of empowerment. Chelsea gallery Burning in Water’s recent exhibition “Elizabeth Catlett: Wake Up in Glory” brought together twelve of her sculptures and two of her prints in an impressive selection spanning 1946 to 2008. Although the gallery should be commended for assembling this mini retrospective, the venue is exceedingly small, and the works would have been better served by one of the more ample white cubes nearby. Navigating among the tightly arranged plinths, one couldn’t help but think that the situation in general spoke to the way the art world and art history have treated work by black female artists: not allotting it enough space.

Catlett was born in Washington, D.C., in 1915 and died in Cuernacava, Mexico, in 2012. She did her undergraduate work at Howard University, after having been accepted to Pittsburgh’s Carnegie Institute of Technology (now Carnegie Mellon) but ultimately denied entry because she was black. She was the first African American woman to earn her MFA at the University of Iowa, where she studied under painter Grant Wood. (This past July, the school named a residence hall in her honor.) In 1942, she moved to Mexico City and joined the Taller de Gráfica Popular, a printmaking collective centered on social issues. Three years later, she was arrested during a railroad workers’ strike. She relinquished her American citizenship in 1962, and the government deemed her an undesirable alien, after which she had to apply for a special visa in order to cross the border.

The Burning in Water show focused on her semiabstract sculptural portrayals of the female figure. Most of the examples on view were bronzes, their dark, rich tone emphasizing a sense of black pride and their smooth, sensuous curves radiating light. Stepping Out (1987) and Mahalia Jackson, New Orleans (2010) comprise joyous, lively female figures. The latter depicts the famed gospel singer with her arms and eyes raised, her skirt billowing around her legs. Such movement and rhythm extends to even Catlett’s more pared-down forms. One work titled Torso from around the 1980s and another from 2008—the first made of bronze and the second of a light green marble—twist and jut with an assertive energy, suggesting bold acts of self-presentation. The shoulders in both pieces reach sharp, definite points. In the earlier example, they have a winglike quality, as if the form might take flight at any moment.

Even when Catlett touches more directly on politics and conflict, it’s with a sense of hope. A 1971 bronze figure titled Political Prisoner looks skyward, her hands behind her back. Her eyes and mouth are open, expressing awe more than angst. The sculpture does not disclose the reasons for the woman’s imprisonment or any specifics of her identity. It bears a universality, as if it could represent any number of oppressed women throughout history.

The figure in Catlett’s lithograph Black Girl (2004) is less abstract than her sculptural counterparts. She has sharp furrows across her forehead and nose and deep troughs under her eyes. Her hair is natural, her stare intense. She’s someone to be taken seriously, a figure with a commanding presence who demands more attention: a stand-in of sorts for Catlett herself.