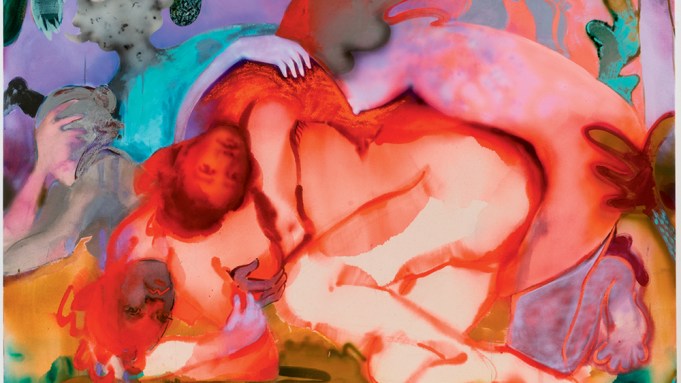 In 1970, the New York–based Alliance of Figurative Artists held a panel discussion posing the question “Why paint myths and legends today?” At the event, members of the group, including Paul Georges and Rosemarie Beck, argued for the relevance of allegorical content to contemporary art, generally concluding that classical themes serve as ideal vehicles for formal, personal, and political expression. A number of alliance members were associated with atelier-style institutions like the New York Academy of Art, where Elizabeth Glaessner, decades later, received her MFA. Glaessner carries on the tradition of her predecessors, drawing from mythological sources to create her own inventive brand of narrative painting.

Greeting visitors to her exhibition of recent works (all 2017) was a trio of seven-foot-tall dye-on-silk paintings suspended from the ceiling in the front gallery. The diaphanous surfaces accentuate the arcadian quality of the jewel-toned compositions, in which female fauns and nymphs inhabit abstracted landscapes. Hooves, for instance, portrays two fauns—one curvaceous and shown from behind, and the other smaller, girlish, and with a snake wrapped around her—in a setting made up of washy forms and shifting patterns. On a wall adjacent to the silk works hung Live Forever, a forty-foot-long rice-paper scroll painted with sumi ink. Scanning the panoramic scene from left to right, one encounters three graces, women with contorted bodies, a leaping deer that appears to lick the torso of a woman draped over its back, and four geometric Venus idols, among many other details. Using a few traditional, modest materials, Glaessner has produced an expansive work that delivers an almost cinematic experience.

The acrylic-on-canvas Bacchanal, which was one of three works shown in the next room, depicts a fleshy pile of women embracing each other so tightly that they appear to merge into a single, sensuous body rendered economically with gestural outlines and thin layers of paint. The faces of two figures are clearly articulated, and could belong to pensive Pre-Raphaelite maidens. A Janus-faced ghoul with hollow eyes and two protruding tongues looms behind the mass of women, threatening to disturb their idyll.

The rear gallery housed six gouaches on paper. Head Games is playful and a little twisted. Under a friezelike tier of blue legs, a headless satyr chases the female who has run off with his head. Two oblivious snails occupy the foreground, resembling goofy cartoon Sphinxes guarding a sacred site.

In Greek mythology, demigods are neither gods nor mortals, their indefinite status giving them a measure of freedom to move between worlds but also relegating them to a kind of purgatory. Glaessner casts women as such characters, populating her tableaux with females who might frolic at the base of Mount Olympus but can never ascend its peak. One reason contemporary painters are attracted to classical sources is that the tales and characters are elastic, changing with the epochs and acquiring new resonances. Glaessner, like certain other painters today, such as Angela Dufresne and Kyle Staver, enlivens mythological imagery with feminist urgency, using it to convey themes such as otherness, trauma, and sexual desire.