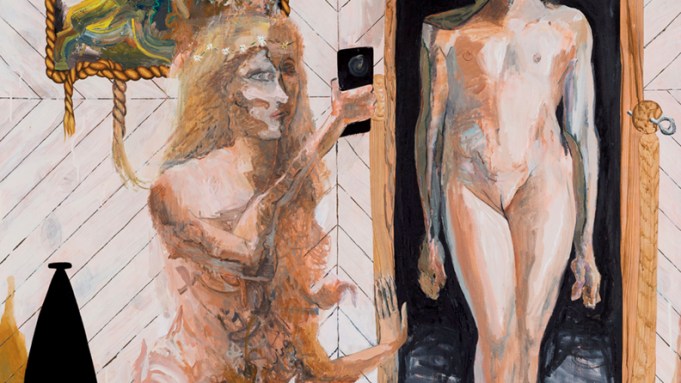 In the six large paintings on view in Elizabeth Malaska’s exhibition (all works 2017), female nudes in strange interiors smoke, sleep, sob, or stare at smartphones. Shunning furniture, they sit, kneel, recline, or crawl on the floor. Most have cats, as witches have familiars. All appear to possess turbulent inner lives. Painfully distorted and conveying severe unease, the nudes arouse compassion, not desire, rebuking the art historical traditions from which they descend. The lounging woman in Apocrypha mimics Matisse’s 1907 Blue Nude (Souvenir of Biskra) in her contorted, hipshot pose but is otherwise the odalisque’s miserable foil. Wearing fishnet panties and sweat socks, Malaska’s middle-aged blonde exhibits small breasts with distended nipples atop a flaccid, lumpy torso. Grimacing, she brings a pawlike hand worriedly to her brow, above one sideways, Picassoid eye; life’s cares weigh heavily on her body and mind. A green vase in the foreground emits branches with monstrous leaves.

Vases appear in all the paintings. With this motif, Malaska invokes the lily-filled vases in countless Annunciations as well as the age-old trope of woman’s body as vessel. She titled her exhibition “Heavenly Bodies,” and in a gallery talk explained her ambition to counter masculinist reifications of the female body in Western art. This is a common feminist strategy, but Malaska focuses uniquely on the postnatal body, and on women’s grief, critiquing canonical treatments of the mater dolorosa as, in her words, “drapery with a face.” The mother is also a body, Malaska asserts in her pictures, often wracked with feeling. Seeking to convey intensely felt female experience, she devises figures bent out of shape, rubbery, rippling. If women’s uncontrolled emotion is perceived as unbecoming, Malaska foregrounds it ruthlessly, her images rivaling Picasso’s horrific portrayals of Dora Maar crying. Indeed, in addition to the paintings, she exhibited a series of charcoal drawings of expressive female heads—counterintuitively titled “Volatile Bodies,”  perhaps to affirm the oneness of mental and corporeal existence—that evoke Picasso’s weeping women.

Possible sources for the anxieties on display in the exhibition are all over the news: war, mass shootings, sexual abuse, domestic violence, the continuing oppression of women. Thus, in the claustrophobic painting Wake to Weep, the figure’s face becomes a mask of tragedy, with hollow black eyes and downturned mouth, as she checks the latest post on her phone. Crouched on her elbows and knees, she embodies despair; her ashen-gray animal body is the color of mourning, her exhausted breasts hang like the dugs of Romulus and Remus’s lupine nurse. Form and Void allegorizes the disparity between the mortal reality of the female body and the societal fantasy of ever-nubile perfection, or between us and our ego ideals. Here, a Godiva with cascading hair takes a selfie while kneeling before a mirror that misinforms her with an image of her girlish counterpart. Painted with a plethora of warm brown brushstrokes, the mature figure begins to disintegrate before our eyes. Her shattering confrontation with the youthful vision in the mirror recalls the moment Dorian Gray rediscovers his portrait. It is a memento mori for our times.