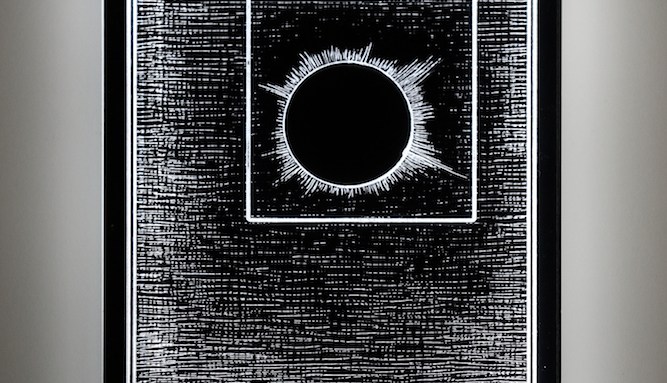 In J.M.W. Turner’s paintings of the English seaside town Margate, the jetty dissolves in beating waves and violent sea spray, and fishing boats are dwarfed by sea and sky. “To feel powerless, overwhelmed, and totally dominated by the spectacle of ‘nature’ is a large part of what we have come to appreciate, since at least the nineteenth century, as the sublime,” writes French philosopher Bruno Latour. Nostalgia for this power dynamic—for a time when we felt small—was the uneasy subject of Ellen Harvey’s exhibition “Nostalgia,” and Margate, painted by Turner throughout his life, was her case study.

The central work of “Nostalgia” was an exhibition within the exhibition: Arcade/Arcadia, an installation commissioned for the 2011 opening of the Turner Contemporary gallery in Margate and reconfigured the following year. In the revised version, a framework of pinewood stud walls houses thirty-four luminous engraved depictions of contemporary Margate and the North Sea. Six-foot-high lighted letters announcing arcadia lean against an exterior wall: signage adapted from that of a now-shuttered Margate amusement park. The structure is a three-quarter-scale reimagining of Turner’s London gallery, and the panels within correspond to the dimensions of paintings on display at the time of his death. Meticulously hand-etched backlit mirror panels, the engravings are linear negatives, static but reflective. Harvey renders the timeworn resort (a sort of British Coney Island with gambling) as a horror vacui of down-market family fun—arcades, casinos, buffets, amusement park rides, a Domino’s Pizza. In one panel, the sea is a mere border at the bottom edge; in others, the town recedes against the expanse of sea; still others frame only sea or a seascape, with no trace of human presence.

On a wall outside this elaborate installation hung another homage to Turner: On the Impossibility of Capturing a Sunset (2017), in which sixteen engraved backlit mirror panels form a composite Turner-esque image of a sunset, the turbulent sky undercut by the work’s dangling electrical cords. Nearby, a platform displayed what at first appeared to be an iPad and iPhone (iPad Eclipse and iPhone Eclipse, both 2017). My daughter tried to play with them, but to her surprise and frustration they were simply plexiglass mirror etchings imitating the devices. The false screens depict images of the recent total solar eclipse. On an iPhone, nature seems very small indeed. What is nature? What was nature? These objects press the question.

Technological mediation of the landscape is nothing new—think of the camera obscura, or the Claude glass, the small, darkened convex mirror named after Claude Lorrain that miniaturizes that which it reflects, turning the world into a picture. In the show, a Claude glass hung from a conventional mirror in Picture(sque), 2017, reflecting TV Rock (2017), a painting of a midcentury television with a melting glacier on its screen. The painting’s surface is mounded with the transparent, crystalline mineral ulexite, as if the glacier could not be contained. Nature is de-naturalized, merged with technology. The show’s title work consists of two adjoined picture frames, one holding a portrait effaced with mildew and the other a radiant field of gold leaf. Here is nature in pure form, as fungus and mineral.

Two paintings made direct reference to Thomas Cole’s “Course of Empire” (1833–36), though Arcadia and collapse were already a central narrative. In Ghost of Penn Station (2017), the original Penn Station—infamously demolished in 1963, with remnants of its neoclassical facade dumped in the Meadowlands—is a grayscale vision emerging from thin washes of paint. New Forest (2013) portrays a forest rising among lily pad columns—an abandoned office building reclaimed by nature, a modern take on Cole’s Desolation. In some sense, it’s a hopeful vision, implying reversibility. “Nostalgia” was a long-considered take on nature in the twenty-first century, offering historical wisdom and imagination at a moment when such conditions seem in short supply.