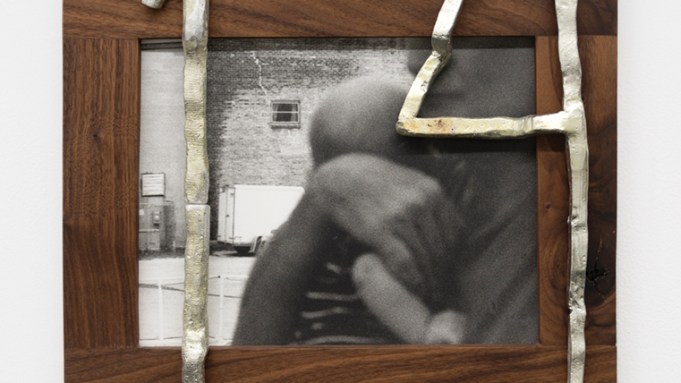 Found in most Catholic churches, the stations of the cross are fourteen images depicting events in Christ’s crucifixion and burial. Em Rooney took the stations as her jumping-off point for “Ordinary Time,” her second solo show at Bodega, reconceiving and reimagining them as a photographic chronicle of the sort of “adjacent moments” that might occur around a death. Most of Rooney’s “stations” don’t depict any significant event per se, but rather have the whiff of one, as if she just missed it and shot something right before or after. Mostly, the images are very banal—or to take a cue from her title, ordinary—but seem to hint at something greater to which we’re not privy.

The photographs are framed by wide walnut planks. Stretching onto the frames, running almost the entire height and width of the works, are thin hand-fashioned pewter numbers. Rooney gave the same numbers to multiple works, pilfered titles from the original stations, and hung the pieces nonsequentially—all of which served to make the images only more evasive. In Jesus Is Stripped (10), two people who appear to be listening intently to a speaker are largely obscured by an illegible white form. In Joseph Takes Jesus down from the Cross I (14), there’s no Joseph to be found. Rather, there’s a woman holding a baby in what looks like an alley. Forgive Them, They Know Not What They Do (11) seems to show a bag of trash burning on a street.

The images, in their very ordinariness, might recall those by Zoe Leonard, whose shots of things like run-down storefronts and bushy clouds outside airplane windows train the eye to the poetics of the everyday—moments oft unnoticed that, upon inspection, glimmer with detail. Rooney’s images aren’t as sumptuous as Leonard’s, but they similarly allude to unknown narratives that are tangential to the works’ nominal subjects: the episodes of Christ’s final moments. The narratives aren’t about Christ at all, really, but about us.

Like Leonard’s work, Rooney’s subtly veers into feminist and queer politics. Three Marys Meet Jesus (6) features a black-and-white photograph of women marching. Jesus Is Thorned (5), meanwhile, contains a close-up of a woman’s black eye. The circumstances of the injury aren’t disclosed, but the insinuation is clear. (Actually, the sex of the subject isn’t disclosed either, but the eye looks female to me.) Although it seems Rooney generally avoids making direct narrative connections between titles and images in her work, it’s worth noting that many of her stations cast females in the originally male roles.

Critics routinely describe Rooney’s work as “vernacular.” Vernacular it is, but sometimes to a fault. The shot of two women who appear to be chatting in John and Jesus Speak (12) seems to be just, well, a shot of two women chatting. The solar eclipse seen in Jesus Dies (13) looks like nothing more than clouds obscuring the sun. We only know it’s a solar eclipse because the press materials tell us it is. There are some alluring images here, such as the child on a couch tenderly wrapping herself around a woman leaning into her, eyes closed, in Veronica Shares Her Veil I (8). But more often than not, the photographs are so prosaic they hold little interest. Rooney may be aiming for adjacent moments, but sometimes you long for the moment itself.