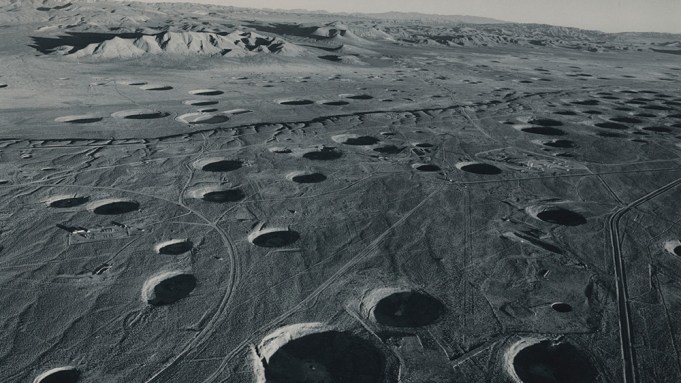 In the catalogue for a 2002 exhibition of Emmet Gowin’s aerial photographs of landscapes altered by human activity, Jock Reynolds, director of the Yale University Art Gallery, recounts that a friend referred to one of the images as “immorally beautiful.” If only things were so simple—if only morality were always staunchly pro- or anti-beauty, and vice versa. Something stranger happens in the photographs of the Nevada Test Site (NTS) that Gowin took in the mid-’90s. Beauty curls tightly around morality and politics and history, not strangling them outright but squeezing, cracking, and coaxing unlike parts together.

Seen one way, these images—the subject of Pace’s small but heady exhibition—depict apocalypse. They may also suggest a beginning, of the kind apocalypse provides: creative destruction, a vast slate-wiping. From 1951 to 1991, the Nevada Test Site, located in the desert some sixty miles northwest of Las Vegas, saw the detonation of several thousand atomic bombs, enough to make the United States by far the most nuked country on the planet. Gowin’s fascination with the area began in 1980 when he was photographing the Mount St. Helens eruption from an airplane and noticed a Manhattan Project facility, the Hanford Nuclear Reservation. A decade of negotiations with the Department of Energy followed. By the time he won permission to shoot classified nuclear zones, the Cold War was over, the NTS had been shut down, and the federal government was shelling out millions to workers who had contracted cancer from the weaponry they’d built. The public was beginning to be more frightened of hurricanes than H-bombs, the delicate creep of annihilation instead of a sudden burst.

In the Midst of Crypto Winter, Pace Hits a Home Run with Random International

Gowin’s photographs are rich enough to evoke both kinds of apocalypse, and a few others. Shot in high-contrast black-and-white and rarely printed larger than a foot square, they avoid the easy grandiosity of their subject matter in favor of studious obscurity. It’s often hard to guess how big the mounds and pockets of earth might be; several of the images include no horizon line, which makes it even harder. Occasionally, some familiar object, a tower or a road, gleams reassuringly, but even then there is little sense of scale. Craters we think we recognize from sixth-grade science class turn out to be something else entirely: many of the blasts at NTS took place deep underground, vaporizing millions of tons of sand and sucking down the land on top. Illuminating the landscape throughout the photos is the frank Southwestern sunlight, powered by its own nuclear reactions millions of miles away.

The works are beautiful, to the degree that one can understand why the artist has been faulted for aestheticizing a terrible, destructive technology. Faced with this line of attack, Gowin has always seemed politely bemused; at a 2018 lecture sponsored by the Aperture Foundation, he remembered, “A lot of the criticism . . . centered on, ‘How dare you make something beautiful which is so awful?’ And I’m not thinking that I’m responsible for that”—“that” being the beautiful, the awful, or both. Even defenders of the series have an odd tendency to try to make it work out to a morally proper message. Robert Adams, in his introduction to the exhibition catalogue, praises his friend for having the “moral compulsion” required to make “something redemptive” from the material.

Gowin has made something of America’s long nuclear nightmare, though redemption seems to have little to do with it. What’s remarkable about the series, instead, is the sense it conveys of a beauty that cannot be domesticated with morality or art because it is too wild to be met head-on—a beauty that has the inevitability of two and two equaling four, and that promises to endure long after the last of us have burned or drowned.