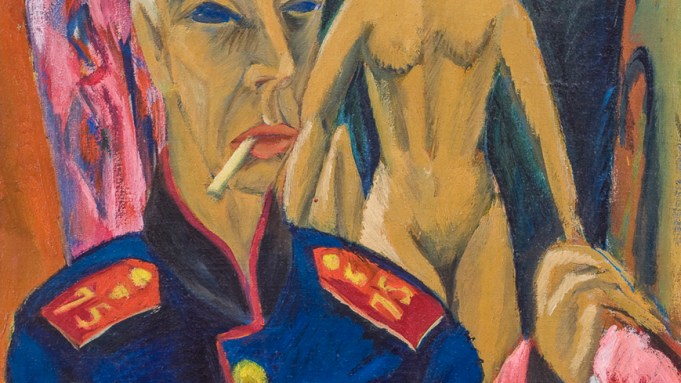 In the years leading up to world War I, German artist Ernst Ludwig Kirchner developed a proto-Expressionist painting style that combined a vibrant palette and lurching brushwork and exemplified the ideals of Die Brücke (The Bridge), the group of painters that he cofounded in Dresden in 1905. Painting, in his hands, became a site of restorative exuberance and anxious estrangement, often in the same image. The curators of the Neue Galerie’s condensed survey of his work, Jill Lloyd and Janis Staggs, have organized the exhibition chronologically: beginning in Dresden and concluding in Davos, the Alpine Swiss town where he ended his career and his life (by suicide) in 1938. Between galleries devoted to these periods lie rooms dedicated to Kirchner’s time in Berlin, where he moved in 1911, and to his fateful experience of the war—which affected him long after he left the mounted artillery in which he served.

For Die Brücke, innovation entailed a turning backward, to places, epochs, and subjectivities unsullied by industrial modernity and its overweening aesthetic refinements. By most accounts, avant-garde primitivism rippled outward from Paris in tandem with Cubism. Yet Kirchner and his colleagues admired objects seemingly unspoiled by Western modernity at the Dresden Museum of Ethnology. This is not to say that Kirchner ignored Western art. In his Portrait of Hans Frisch (ca. 1907), the subject’s face is daubed with motley color and his dark blue suit swirls with languid impasto. The image betrays a burgeoning interest in Vincent van Gogh and Edvard Munch, both of whose work he viewed during this period, as does the nearby portrait Doris Standing (1906). Here, though, Kirchner pairs demonstrative brushwork with a notable flattening of form. Like van Gogh and Munch, Kirchner, as attentive to inner states as to physical presence, increasingly married Impressionism’s schematic figuration to gestural flourishes. Showing two figures squeezed together by a narrow vertical frame and linked by a huge nest of interconnected hair, Two Nudes (1907) further evinces the tension in Kirchner’s work between the aesthetic poles of realism and symbolism.

As the Berlin room demonstrated, Kirchner was a painter not simply of bodies, but also of spaces, which he presented as, by turns, alienating and idyllic. The warped interior of The Toilette (Woman before the Mirror), 1913–20, wouldn’t have been out of place as a set design for The Cabinet of Dr. Caligari. In Tower Room, Fehmarn (Self-Portrait with Erna), 1913, the erotic presence of a nude female body does nothing to make the compressed interior feel less claustrophobic. Two Nude Figures in a Landscape (1913), by contrast, exemplifies the affinity of the Brücke artists for the rejuvenating asylum of the natural world. The figures’ hunched, naked forms seem as much a part of the landscape as the rocks with which they rhyme formally do, just as their color echoes the stone outcropping at left.

Kirchner’s famous 1913 Berlin street scenes feature prostitutes and bourgeois men pressed together in masses of transactional anonymity. The war would soon exacerbate the experience of modern cities as sites of estrangement. Kirchner’s nervous breakdown during his military service found expression in his work, most notably his painting Self-Portrait as a Soldier (1915), in which he depicted himself in uniform and raising an arm with its hand chopped off. Kirchner’s actual injuries were less physical than mental, and he sought treatment in the mountains of Davos beginning in 1917. A number of paintings, like the 1917–19 Life in the Alps (Triptych), capture the bucolic existence he witnessed there, while a large tapestry and a small rug he designed at this time evoke a folkish simplicity not only in their imagery but also in their medium.

As the Expressionist who engaged most extensively with photography, Kirchner left behind over a thousand negatives. He shot many of his photographs in his studio, which appears as an active site for performances, artistic exchange, and the radical rejection of bourgeois norms. The exhibition includes several photographic reproductions, as well as drawings, a caryatid sculpture, and a wide range of prints—a medium in which Kirchner produced some of his most striking work. To cite just one example, the woodcut Windswept Firs (1919) places the viewer in a dense forest in which two figures walk along a path lit by a starry sky. Even more evocative of nature as a site of healing is Kirchner’s painting (1919–20) of a gorge in the Tinzenhorn mountain. A chapel nestles amid the landscape of purple and green crests, above which the sky glows green.

Kirchner would return to this area for years to come. A 1937 painting of his mountainside studio shows an interior space crisply delineated and utterly confusing, a warren of angled walls and rectangular features suggesting mirrors, doorways, or framed canvases. To the right appears a doorway through which we see blue sky and trees—a rustic tranquility rendered all the more ironic for the date of its representation. In 1937, numerous paintings by Kirchner were hung in the Nazis’ infamous “degenerate art” exhibition. Less than a year later, the artist took his own life.

This article appears under the title “Ernst Ludwig Kirchner” in the January 2020 issue, pp. 81–82.