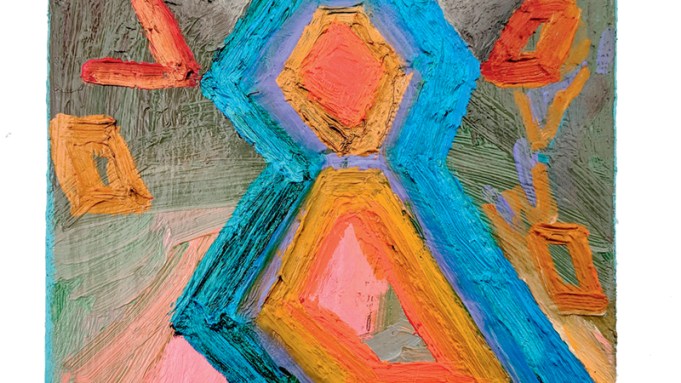 Ewelina Bochenska’s exhibition “A Hole Was Placed in the Sky and Sealed with Water” featured nearly thirty jewellike oil paintings—most around eight by ten inches, though two could fit in the palm of your hand—that seemed to transform Fortnight Institute into a site for communion with a mystical realm. Mixing vivid rainbow hues and muddier tones, the compositions portray visionary-seeming landscapes and imagery culled from Native American mythology, with much of the latter modeled on ancient petroglyphs in present-day Utah and Arizona. The Polish-born, Brooklyn-based artist made all the works on view—which, in addition to the paintings, included a few textile pieces—while on a road trip through the American Southwest in the early months of 2018. She employed materials she brought with her as well as some she picked up along the way, producing a body of work that incorporates sundry painting supports (canvas, wood, composite board) and mixed-medium elements (Zuni-made yarn, sand from White Sands National Monument).

The paintings have an intensely material, often sculptural quality. Bochenska sewed or glued thin leather ropes to many of the supports prior to painting. The resultant relief effect is most successful when it complements the painted forms, as in Spirits of Hoodoos, where a raised line defines the curving sweep of a rocky canyon. Woven materials likewise produce a sense of tactility: the undulating hills and pale mint-green moon in Seven Waterfalls, for instance, sit atop a woven-yarn ground, while Andromeda, Taawaki, and Hand Trembler, all of which depict assortments of mythological symbols, are framed by crocheted braids affixed to the canvases’ tacking margins. Throughout the show, one sensed nods to Georgia O’Keeffe’s hallucinogenic landscapes, Florine Stettheimer’s storybook color palette, and the informality of hippie handicraft. Yet Bochenska has assimilated her inspirations into her own aesthetic, producing confident, singular work whose delicate detailing and dimunitive scale are compellingly at odds with an overall sense of hardiness.

Like amulets, Bochenska’s compositions emit a kind of power, much as the fiery coral-colored moon shape in Worlds within Worlds appears to radiate energy in the form of concentric arcs. Her paintings place seemingly diametrical qualities such as real and imagined, visible and invisible, in productive tension: while the Native American imagery points to mythological beings, for instance, its origins in rock carvings give it an earthly quality; and while the landscapes are based on actual ones, they are portrayed subjectively—by memory rather than copied en plein air. In this, the images recall the way Joan Mitchell’s expressionistic landscapes mapped internal topography rather than observed fact. Bochenska’s work feels both of this world and outside it, bidding us to live an existence that more purposefully bridges the two.

Cher Stuns the Audience at the Ann Demeulemeester Show