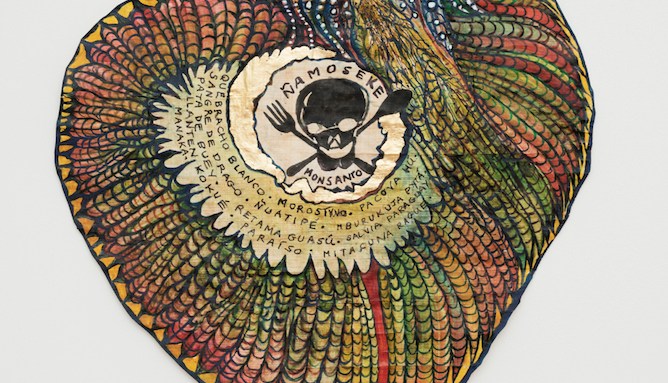 This exhibition remounted Providence-based artist Faith Wilding’s 1982 series “Natural Parables” for the first time since its debut, placing it alongside her works from the past couple years. Although made three and a half decades after the “Natural Parables,” the recent works employ similar conceptual strategies and iconography, raising questions about the relevance of the gendered tropes she invokes in this present political moment.

In the 1970s—the heady days of feminist art’s inception—Wilding studied under Judy Chicago and Miriam Schapiro in the Feminist Art Program at the California Institute of the Arts, making notable contributions to the program’s most ambitious project: Womanhouse (1972), an installation and performance space that occupied an old mansion. The influence of Wilding’s mentors on her “Natural Parables” series is unmistakable, as the works scan like illustrations for a textbook on central core imagery (the vulva- or vaginalike forms that Chicago and Schapiro claimed that women artists, consciously or not, produce). Each of the six “Natural Parables” consists of a shaped oil-on-masonite piece hung adjacent to a framed watercolor-and-pencil composition. Resembling cocoons split by suggestive slits, flowers with unfurling petals, or burst-open seedpods, the shaped paintings recall the genital forms in Judy Chicago’s notorious Dinner Party (1974–79), while their striations of soft and bold colors echo those found in Chicago’s early works on paper and paintings. The drawings paired with Wilding’s paintings display a cast of characters familiar from feminist art’s early years: faceless chrysalis figures resembling prehistoric “Venus” figurines, women sprouting roots and branches in place of limbs, and dancing women sporting horns and pendulous breasts.

Given that the uncoupling of genitalia from gender and women from nature is a central aim of progressive sexual politics today, one wonders: why this work now? How does the exhibition relate to the past programming at Western Exhibitions, which has spotlighted queer and trans artists dedicated to dismantling the very binaries Wilding’s work seems to reinforce? Wilding’s recent works indicate a shift in political circumstances, but not in her motifs: in her 2017 “Papyrus Leaves” series, for instance, cocoon- and seedpod-shaped pieces of plant-based parchment display images of tree-women surrounded by whorls of text condemning the proliferation of genetically modified organisms and multinational trade deals. Wilding continues to rely on a visual lexicon that could make third-wave feminists blush. Yet her work offers vital ecofeminist messages that a younger generation might miss while rolling their eyes in response to her seemingly outmoded forms.

Though the exhibition’s stated mission was to highlight Wilding’s drawing practice, her focus on particular political problems raises the question of whether her works might function more effectively in the context of direct actions than they do on gallery walls. There is something proplike about the oil-on-masonite pieces and about the swath of white fabric licked with bright teal and fuchsia washes that hung on one wall (Tears Cloth, 2017), as if these works are meant to be animated in the kind of theatrical protest events that have for generations incorporated image- and object-making strategies into performance. Whereas certain works—like the collage Organize (2016), which clunkily combines strips of watercolor-blotted paper with photographs of protesters holding signs bearing slogans in Spanish—clearly depict forms of protest, the less didactic pieces are more fruitful, as they stimulate the viewer to imagine alternative channels in which they could circulate.